All through 2014, as a midterm election year, Americans have been listening to the candidates, wading through campaign advertisements and trying to align their values and opinions with the candidates and issues on the ballot. Over the last several weeks, we have had the opportunity to make our voices heard, and now, the results are in!

The Republicans took control of Congress by gaining seven seats in the Senate, for a total of 52 seats. The Democrats currently occupy 44 seats, and two seats are held by Independent party members who caucus with the Democrats. The map below shows to which party the newly elected senator from each state belongs and whether the newly elected senator is from the same party as the previous senator. The map also demonstrates the relative amount of votes that went to the Republican, Democratic, and Independent parties for the top three candidates from each state. Click on each state that held an election to learn more about the newly elected senator. Clicking on Louisiana will take you to a webpage with information about both candidates who are moving on to the runoff election. Click on states that did not hold an election to read about the current senators for that state. 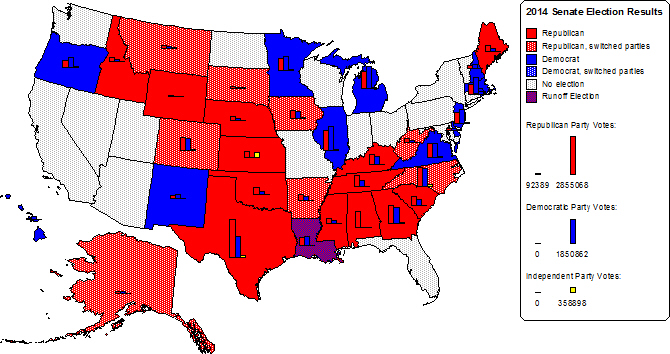 Map of 2014 Senate election results; click on a state to read about its current or newly elected senators.

Of the 34 states who held elections for the Senate on Tuesday, November 4, 2014, only 11 voted in Democratic candidates. Interestingly, each of these 11 states already had in a Democrat in office, so all eight states that saw a party change as a result of last Tuesday’s Senate vote had a Democrat leave and a Republican take office. At the time I gathered the election data, Louisiana’s top two candidates were pushed to a runoff election, and Alaska was still processing votes. However, with 99 percent of the votes reported, it is likely that Alaska will also go red this year, and therefore, it is red on the map.

Whether your blood runs red, blue, or somewhere in between, thanks for casting your vote!

Election data taken from http://www.politico.com/2014-election/results/map/senate/. Elephant and donkey icons from DonkeyHotey; the Creative Commons license can be viewed here.