One of the most interesting Golden Software user stories that I have recently heard was from an independent Hydrogeologist with Anthropocene Solutions Inc. named Joseph ‘Joe’ Harrer. Joe Harrer uses a combination of vertical EC measurement and groundwater sampling tools with Voxler to perform 3D brine plume modeling. Joe is working on a project where he was hired to do a groundwater characterization of a brine storage facility where initial studies proved that leakage beneath a brine plume has caused an impact to the soil and groundwater and that the impact has been spreading with the groundwater as it migrates down gradient. Local regulations required a full assessment of the plume’s extent and a model of the potential migration of the plume.  In addition, a groundwater remediation system is presently being installed at the site. Joe used our Voxler app for the 3D modeling portion of this project.

The facility is located in rural Alberta.   A leaking liner at the base of a brine storage pond, began impacting the shallow groundwater of a complex glacial till substrate; and the impact was initially discovered in 2006. To monitor the salinity levels in the groundwater, a number of compliance and perimeter monitoring wells were arranged around the site.  Additional soil and groundwater investigations regarding hydraulic control/remediation of the impacted groundwater were required during a recent Permit Application. This is the point where Joe got involved with the project and as Principal Hydrogeologist, by designing a new groundwater monitoring program and modeling the plume using Goldens Voxler modeling program. He verified that the major Chemicals of Concern (CoCs) were chloride, TDS, sodium, sulphate and a few dissolved metals. 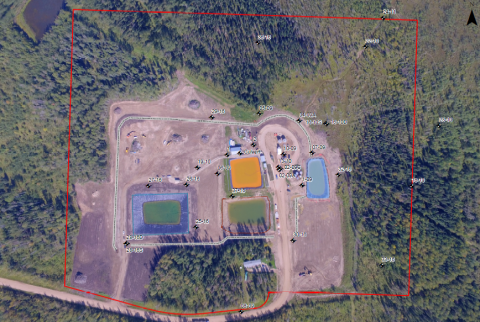 A site map for the brine manufacturing and storage facility, where monitoring well locations are shown.

A segment of the remediation plan was to add vertical EC probes between the existing groundwater monitoring wells to aide in the delineation of the brine plume; which added more detail to the plume data. The Hydrogeologist choose to use the Geoprobe® Vertical EC Measurement Tool, over traditional EM surveys, for a number of different factors. Namely, the Geoprobe’s ability to quantify the brine concentrations at various levels from the probing locations. Joe also used the Geoprobe® Groundwater Sampling tool to extract samples of the groundwater at 60% of the probing locations. These two tools helped the Hydrogeologist get enough data to complete an accurate 3D dataset of the Brine Plume. The data was QC’ed at a local lab and sent back to Joe for the model creation.

The 3D EC dataset, which contains 18,558 readings, was imported into Voxler as well data. The WellRender was used to visualize the boring locations; with the EC readings color-coded at true depth along the borings. The EC data was converted to a point cloud and gridded to create a 3D volume of the EC readings for the entire site’s extent.

A series of Isosurfaces were used to visualize the brine plume extents in 3D.  The Hydrogeologist established 7 different threshold levels of brine plume concentrations, which depict the plumes extent at these various levels.  Voxler was also used by the Hydrogeologist to calculate the volume of each Isosurface, which represents the cubic meters of chloride concentration within the plume. 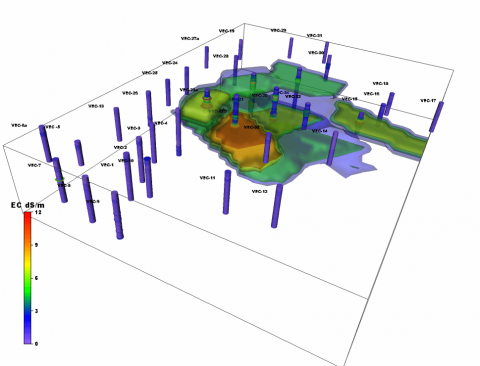 The Brine Plume Model in Voxler that was generated by the Hydrogeologist. WellRender and Isosurface modules depict the site’s subsurface brine concentration levels.

The Voxler model and volume calculations were submitted to Joe’s client and the Alberta Environment and Parks department as part of an annual groundwater monitoring and hydrogeologic investigation report. The model aided the remediation team in understanding the extent of the brine plume in 3D and selecting new locations for additional monitoring well placement. If you are interested in getting more details about Joe’s project, stay tuned; there is more to come on this Principle Geologist’s story this spring on our Success Stories page.