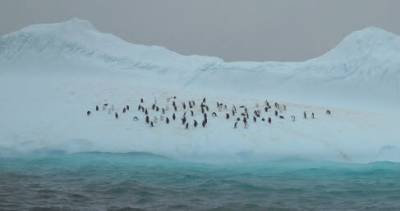 I recently had the opportunity to sit down with Golden Software President Pat Madison to talk about his exciting trip to Antarctica! Pat's 5-day excursion with his wife and friends began on January 29, 2015 in Ushuaia, Argentina. Ushuaia is the capital of Tierra del Fuego, deemed the "Land of Fire" by explorer Ferdinand Magellan. Ushuaia is widely regarded as the southernmost city in the world.

From Ushuaia, Pat's ship made an overnight journey to his first stop, the Falkland Islands. Ushuaia was the only location on the trip that had docks, so when the ship neared the Falkland Islands, Pat and his crew hopped in zodiac boats and zipped over to the islands where they spent a windy afternoon exploring. They had the opportunity to see sheep, penguins, seals, and albatross while visiting the Falkland Islands. Pat was fascinated by the albatross, who need the wind in order to fly due to their narrow wings.

From the Falkland Islands, the ship took a 2-day trip to South Georgia Island, the final resting place of famed Antarctic explorer Ernest Shackelton. Pat even had the opportunity to hike parts of Shackelton's route! After many whaling stations were abandoned, South Georgia became highly regulated in an attempt to preserve its natural state. Once overrun by reindeer and rats, and still battling invasive plants, many precautions are in place to preserve the natural ecosystem. Pat recalled having to have the clothes he planned to wear on the island vacuumed prior to boarding the zodiac boats to prevent taking even the tiniest foreign seeds onto the island.

After exploring the Falkland Islands, Pat and company made brief stops at South Orkney Island and the South Shetland Islands before heading to their final destination on the Danco Coast of Antarctica! In Antarctica, Pat had the opportunity to take zodiac boat tours through the icy waters around the Antarctic Peninsula. There was plenty of wildlife to see on the 2-hour long tours, including whales, seals, and more penguins than Pat could count! In addition to zodiac boat tours, the explorers had time to paddle kayaks around the peninsula, as well as to take shore walks where they were able to observe colonies of penguins, seals, and other wildlife. 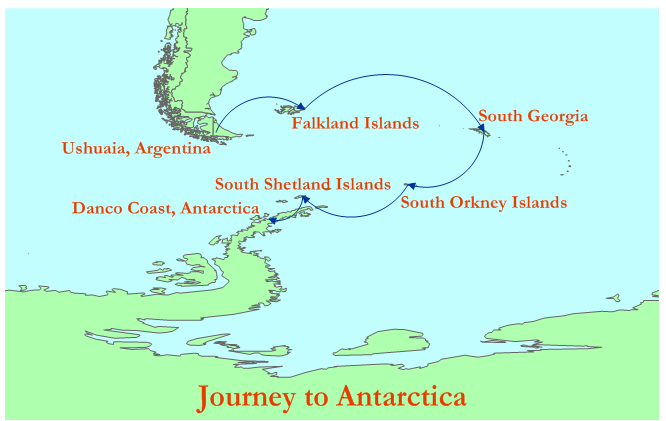 When I asked Pat to describe the sights, sounds, and environment he experienced, he smiled as he told me that the terrain was reminiscent of the Rocky Mountains here in Colorado during the winter time. He described Antarctica as a rugged land, covered in rock and ice, with little to no greenery. He did see some moss and lichens, however. There were very few manmade structures aside from the abandoned whaling stations, left behind after commercial whaling was banned. I've always imagined Antarctica to be an icy, uninhabitable tundra, so I was delighted to hear how temperate the weather was! Pat reported that he didn't experience any freezing temperatures! He and his companions enjoyed weather that ranged from around 32 to 52 degrees Farenheit. When asked about the sounds, Pat recalled that the seals, penguins, and other birds were quite boisterous! I was fascinated to hear about the loud, thunder-like cracks that he heard coming from slow moving glaciers. He said that every now and then you could see a bit of ice move, but it was quite subtle.

Finally, I asked Pat what was most surprising and unexpected about Antarctica. After some thought, he told me he was impressed with the amount of scenic views and wildlife that he experienced. He said it was quite enjoyable to sit on the ship and just look. He took in views of stunning blue ice, magnificent icebergs, whale tales and spouts, and countless seals and penguins! I was captivated by all the beautiful photos he had of this foreign land! Though, Pat laughed as he explained he would have had more photos, had his kayak not capsized in the icy water. 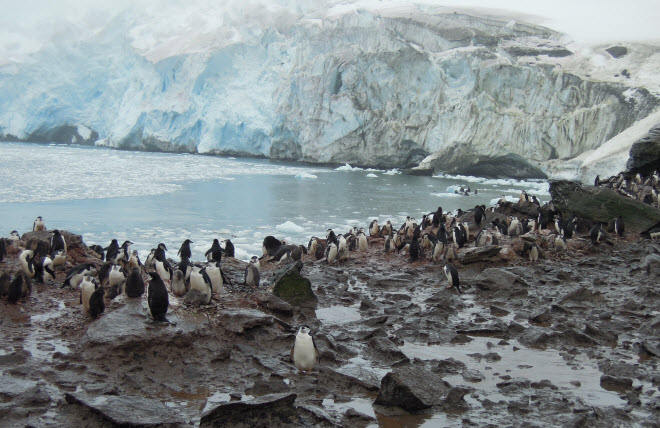 Penguins gather on rocky terrain in the Antarctic.

After a few days of exciting adventures and engaging lectures, Pat and his crew were satisfied to take the treacherous Drake Passage back to Ushuaia on the way home. It was an enlightening experience to hear of his time in a place where so few feet have tread. I think it sounds like an opportunity for a future Golden Software staff team-building challenge!