Bring GPS Data Collected by a Smartphone to Life in Surfer

This past Spring, I started using a smartphone app that uses GPS to track physical activity called Strava. I began using Strava because I, in a very stereotypical new to Denver move, bought a bike. As a new cycler I wanted a tool to help me track how far I am biking, the routes I am taking, and a resource that shares the popular routes other bikers were using around the metro area.

Fast forward to 9 months from that purchase and I have thoroughly enjoyed using Strava for tracking both my bike rides and jogging routes. The GPS technology is very accurate and records distance, elevation, and elapsed time all from my phone. It even keeps track of all the times I have ever put in on a route. Allowing me to track personal records down to the tenth of a mile on various segments along my favorite trails.

Recently, I received a Strava newsletter that informed me if I signed in to the desktop website I could export and download my activity as GPS data in several different file formats. As an employee for a mapping software company, my curiosity was peaked and I instantly logged into see if I could export to a supported file format in Surfer. Fantastic news, Strava includes options to export any activity as a GPX file which can be imported into Surfer as a base map. Even better, the polylines stored in the GPX files have associated XYZ data in longitude, latitude and elevation in feet!

With this discovery the wheels starting turning and I started experimenting in Surfer. Eventually, I came up with 3 maps that showcase the jogging and biking routes I enjoyed the most this summer. Each map utilizing unique Surfer features to tell the story of the surrounding area.

This first map illustrates the two routes I have biked the most this past year. As long as the weather cooperates, these are my weekend go-tos. The blue and red polylines represent the two different routes as they sit on a contour map of the Denver Metro area. Also pictured are two profiles that follow the entirety of the routes and show the elevation in feet at the corresponding distance in miles. Surfer has an incredibly straight forward workflow to create a profile of a polyline already built in that I used to generate these profiles: Create Profiles from any Polyline in a Base Layer.

As you can see from the profiles both routes follow a downhill, flat, to uphill pattern and keep an elevation above a mile (5,280 feet) the entire way. Denver is known as the Mile High City for a reason!

The red polyline represents a section of the Clear Creek Trail. In its entirety the Clear Creek Trail runs from Golden to north Denver. Golden is an idyllic and historic town which is home to both Golden Software, and the only slightly more famous Coors Brewing Company.

The Clear Creek was a hotspot during the Gold Rush, which led to Golden's namesake. Even to this day as you ride along the Clear Creek Trail you can spot hobbyists panning for gold, hoping to pull a nugget out of the creek. The main reason this trail is a favorite among Denver metro cyclists is it passes through several wooded parks, rapid sections along the creek, and ends in Golden… home to several delicious microbreweries to reward oneself after a long ride. 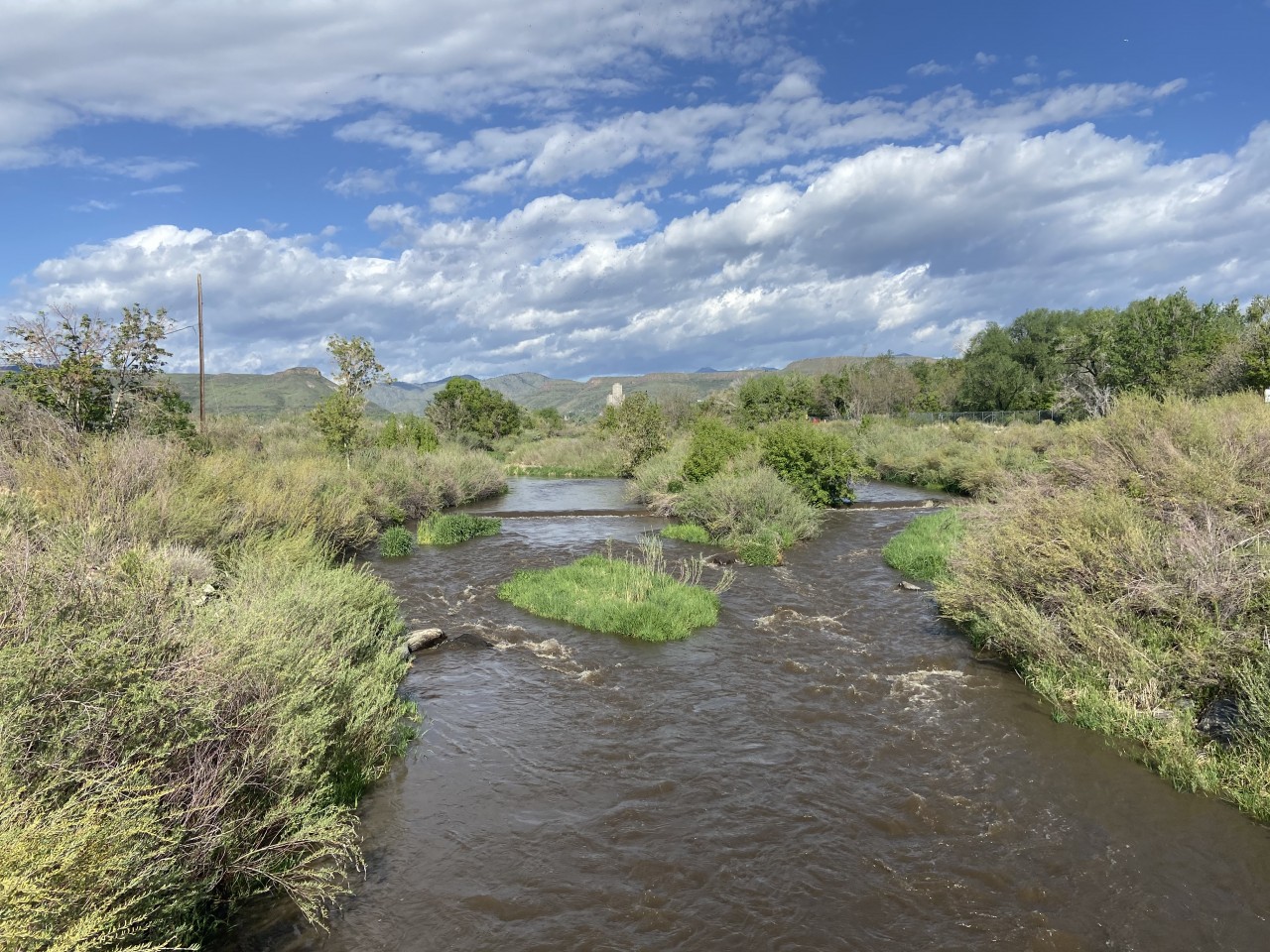 Clear Creek in May during high water level season. The large building in the background is one of several buildings along the Coors production line. 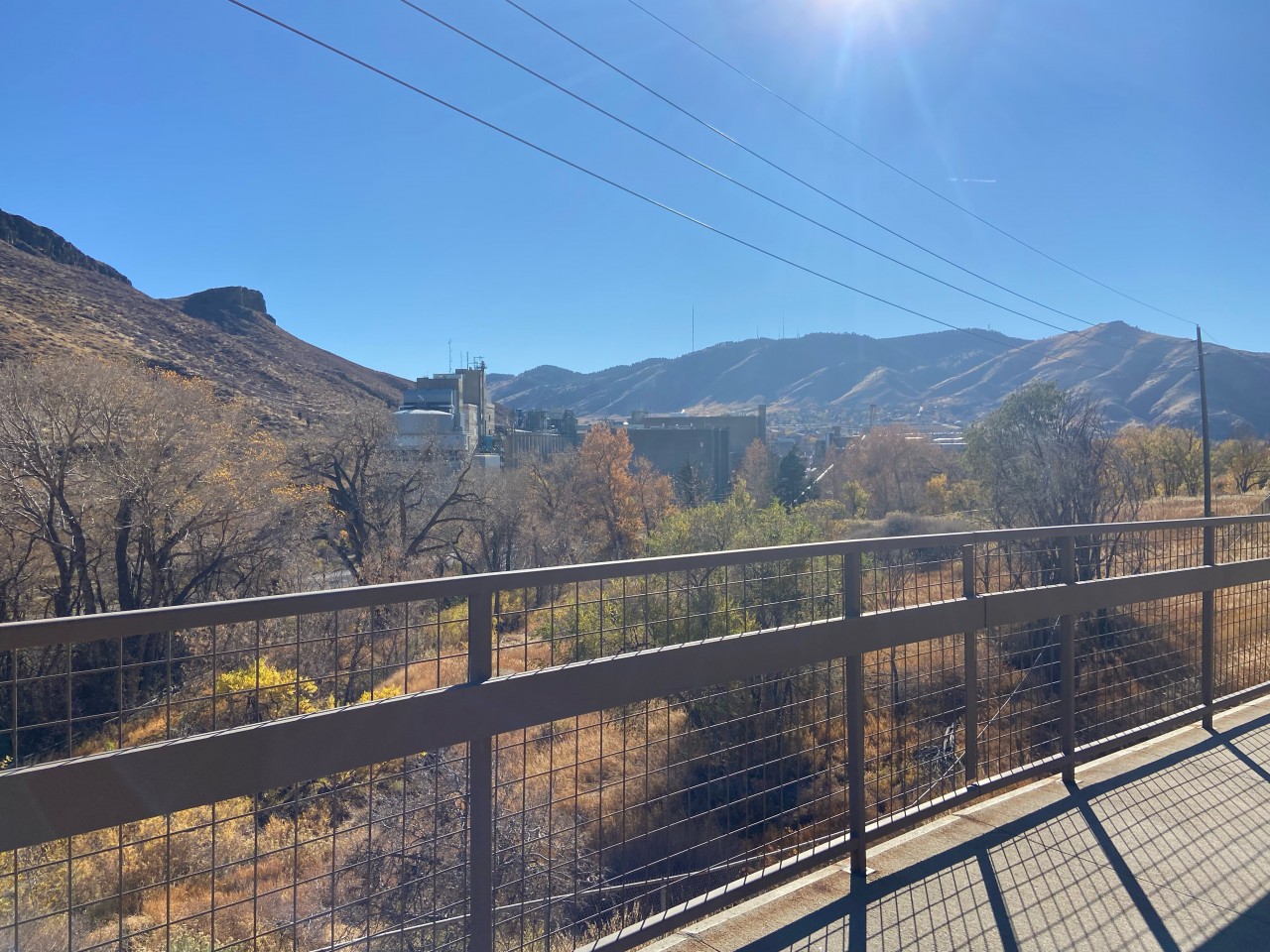 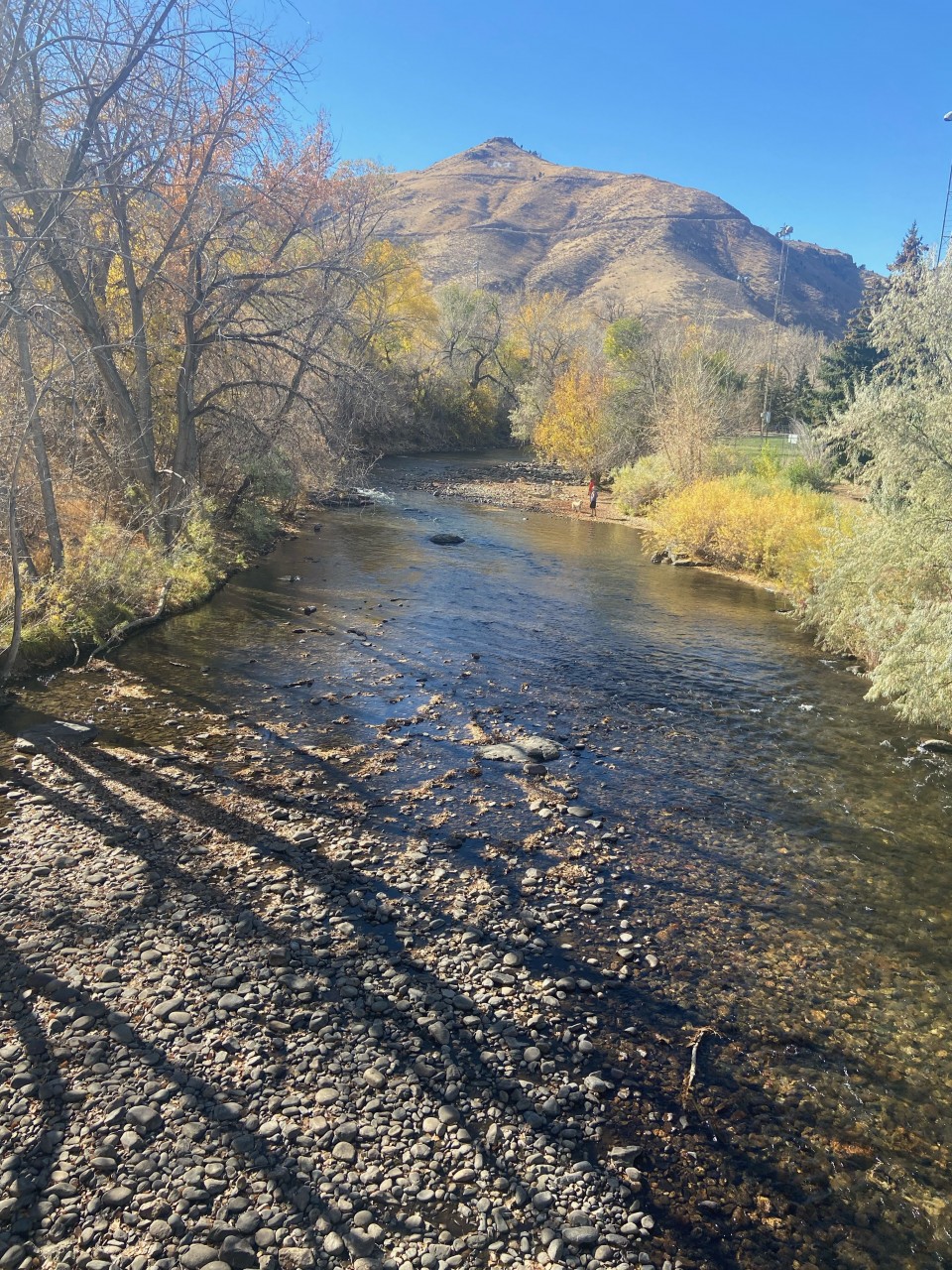 Clear Creek in Fall from a bridge in Golden, CO

The blue polyline follows the back quarter of the Clear Creek Trail, then merges into the South Platte River Trail and finishes with some more precarious city biking. It creates a loop around the Denver metro area that passes through the heart of the city, with famous landmarks such as Coors Field on the way! If you are interested in a route that combines nature and Denver sightseeing, this is a great path to spend a few hours on. 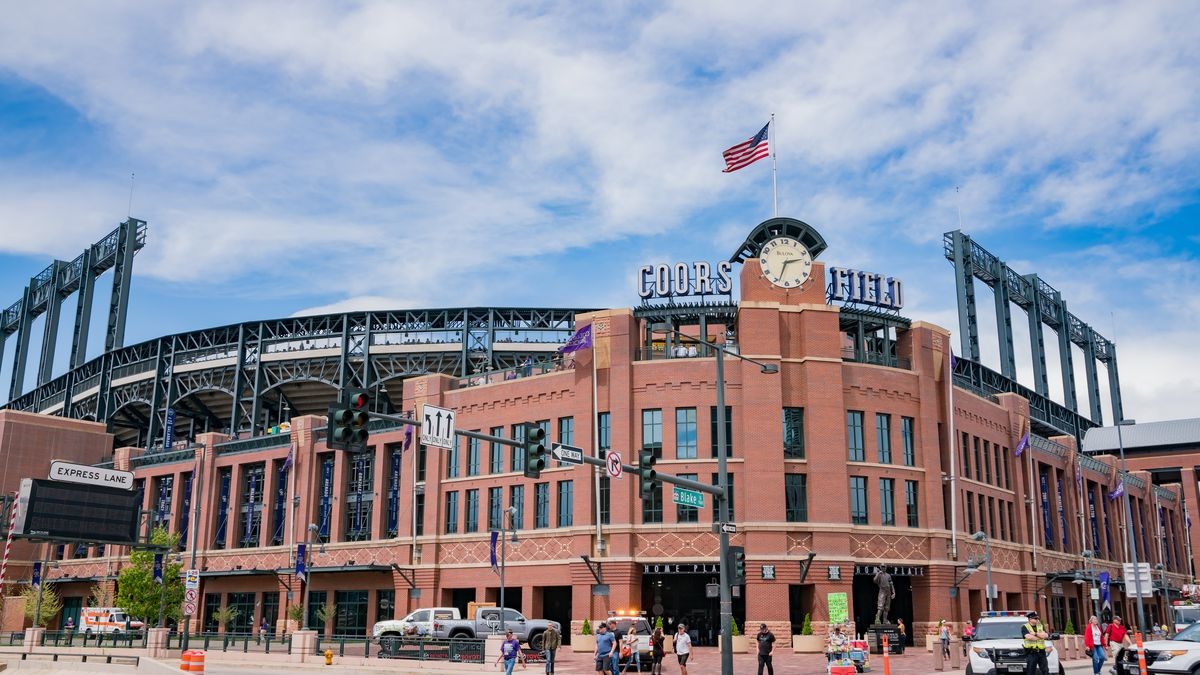 
Jogging Along the Oregon Coast: 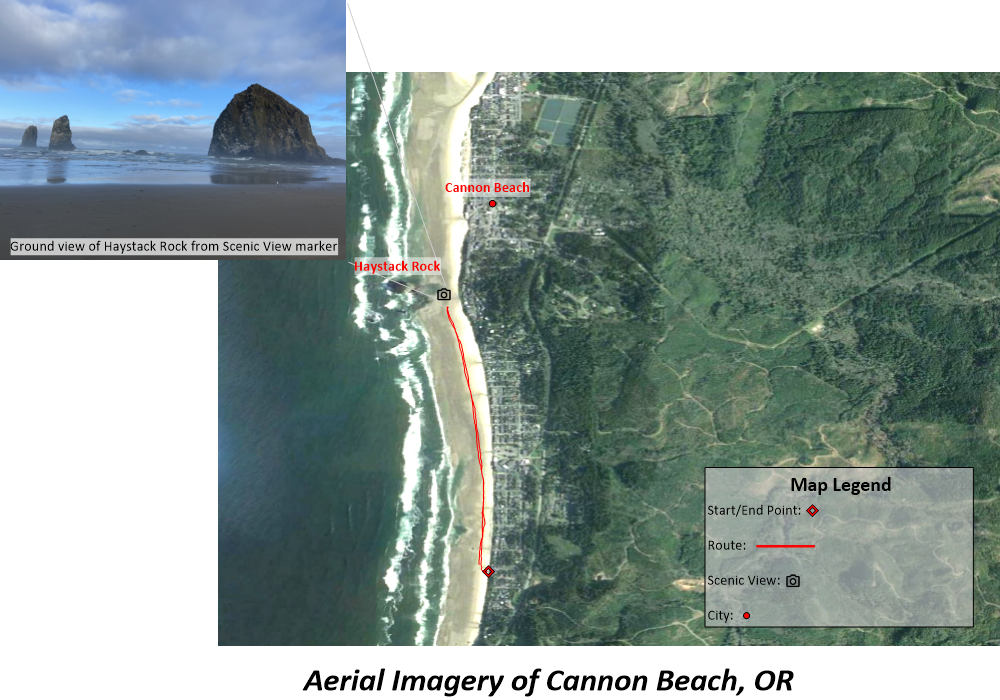 Next, we have a short beach jog that I went out for one morning while on vacation in Cannon Beach, Oregon. Cannon Beach is on the Northern Oregon Coast and the shoreline is dotted with breathtaking rocky sea stacks that tower out of the ocean. For this map I wanted to capture the scenery of both the beach as well as the dense forest that occurs right before transitioning into beach town. To accomplish this I georeferenced aerial imagery that I pulled from Google Earth in Surfer, then added my GPS data from Strava as a Base(vector) layer to the map.

My favorite part about Cannon Beach was undoubtedly the iconic Haystack Rock. In order to show how impressive the landmark is from a ground view I added an unreferenced picture I took myself on the morning of my jog as an inset to the map.

Haystack Rock is a recognized wildlife habitat and anyone can wade in the surrounding intertidal pools. Giving beachgoers the opportunity to view creatures such as sea stars and anemones up close. The sea stack is also home to dozens of unique seabird species which nest atop the 235 foot tall rock. Perhaps, the most famous species to call the rock home is the Tufted Puffin. The community of Cannon Beach has adopted the Tufted Puffin as its unofficial mascot and each Spring from April to early July the birds migrate and nest on the rock for their breeding season. Eventually returning back to their Winter-feeding grounds in the North Central Pacific once the chicks are strong enough to make the journey. 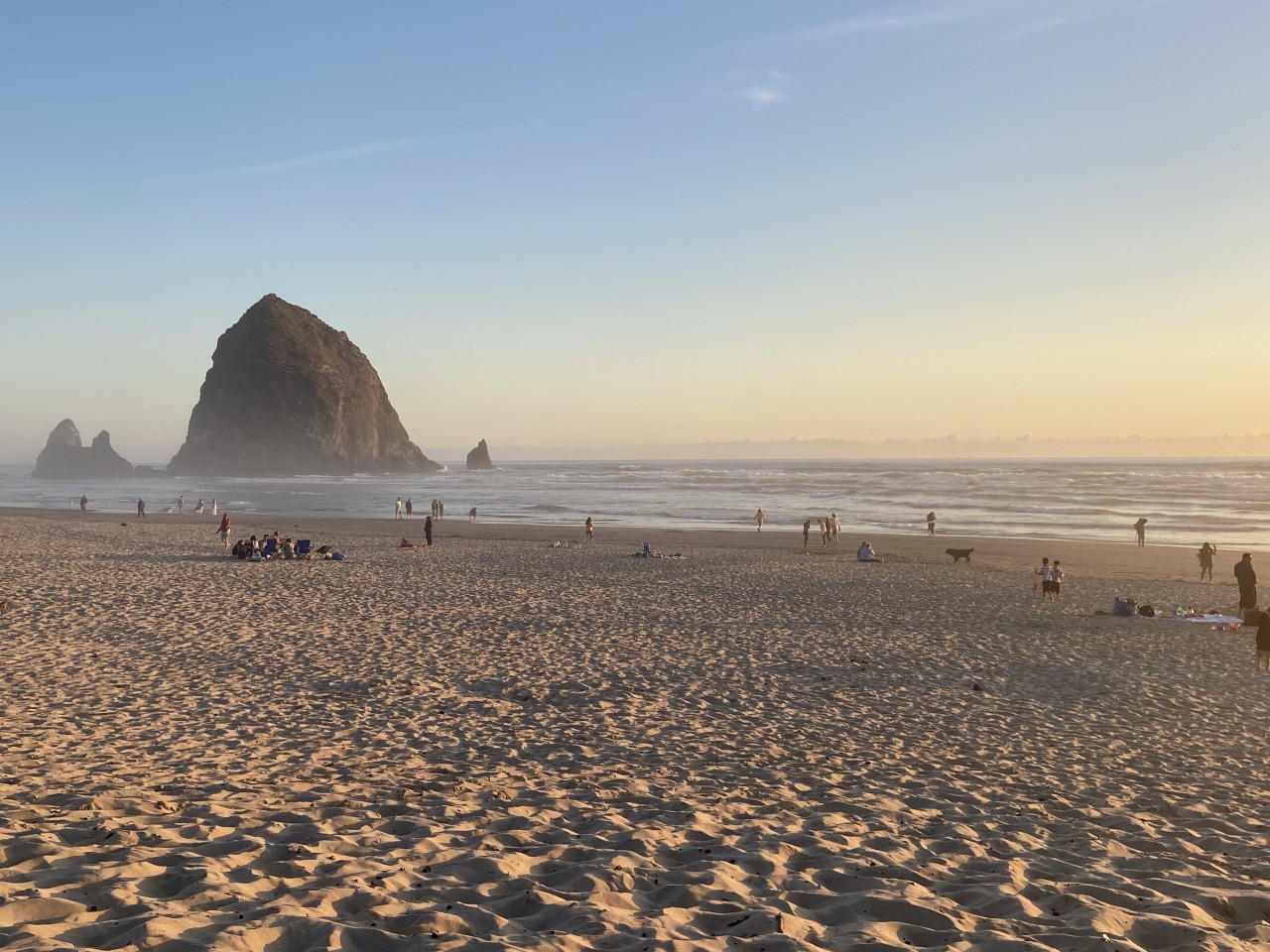 Haystack Rock at sunset in Cannon Beach, OR 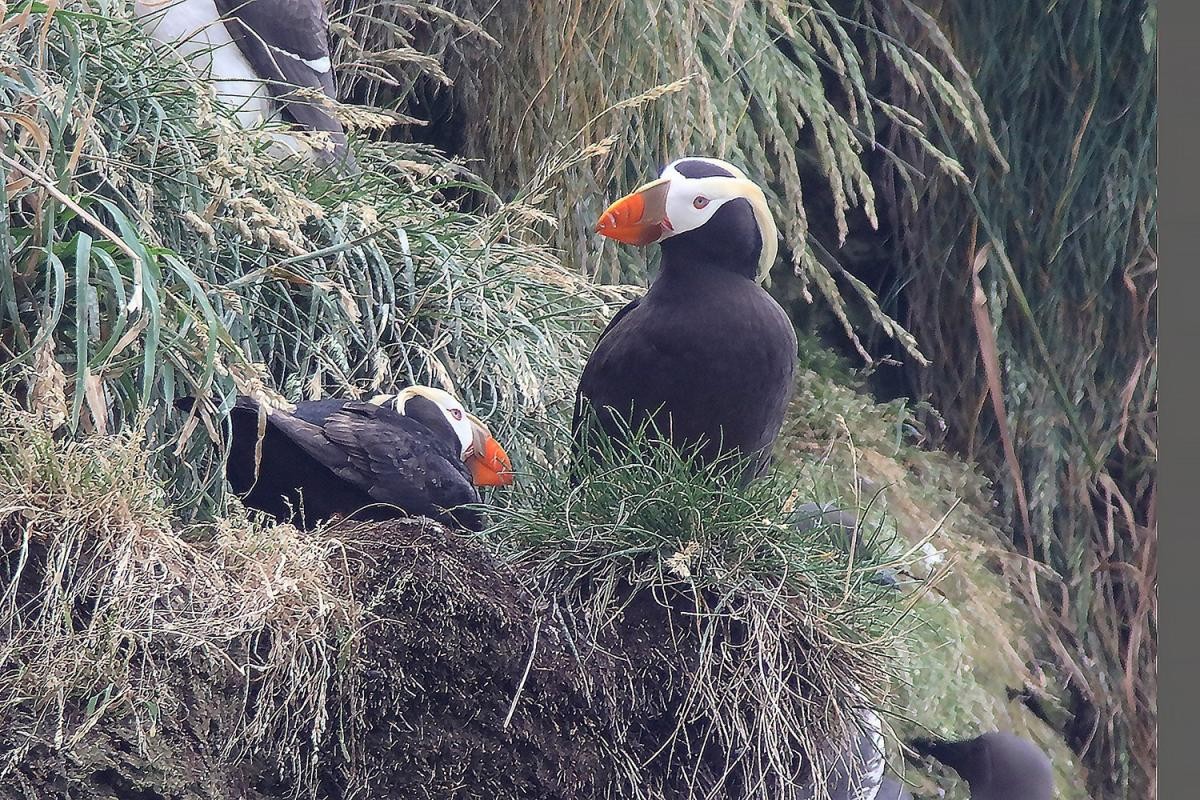 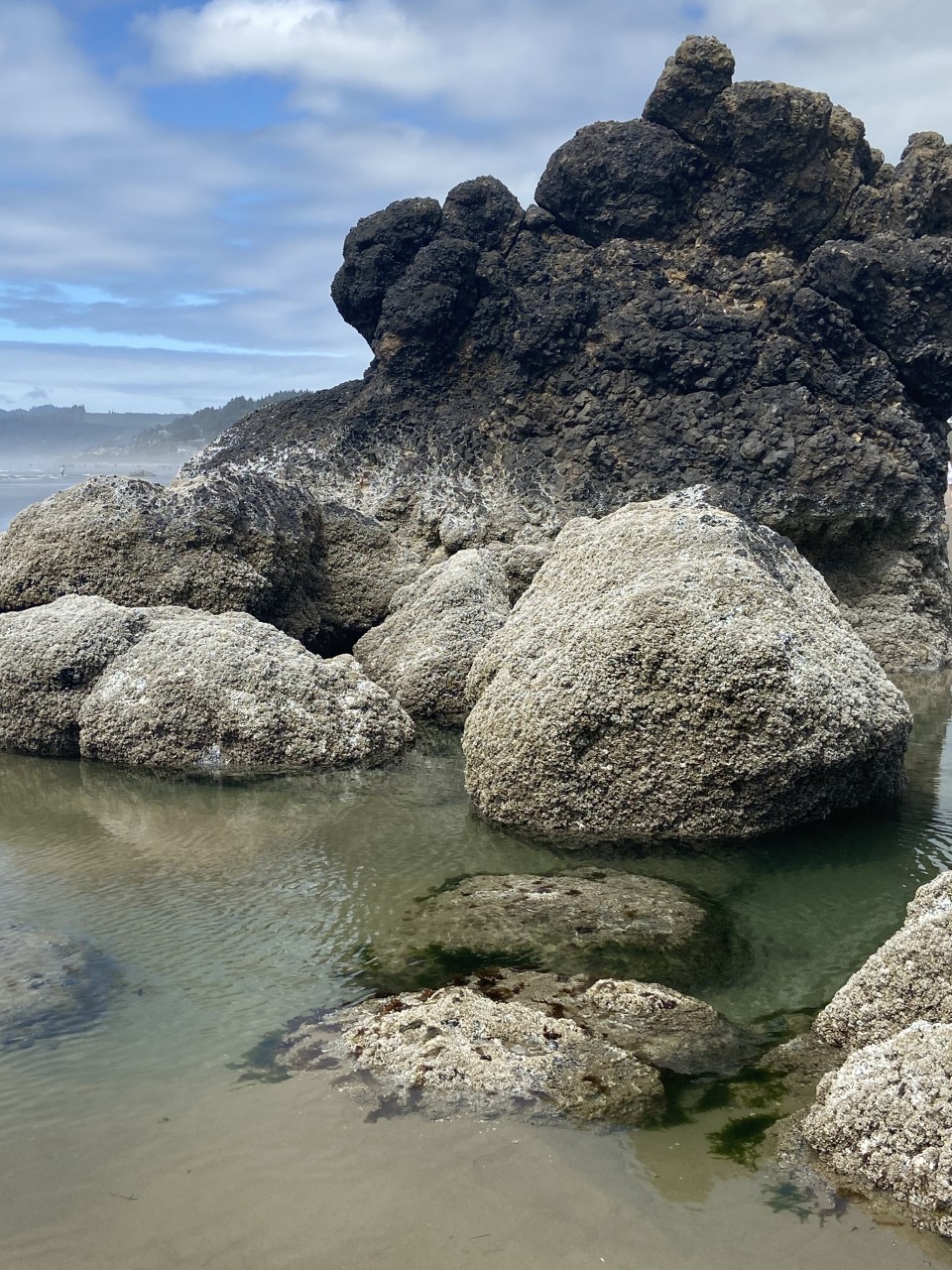 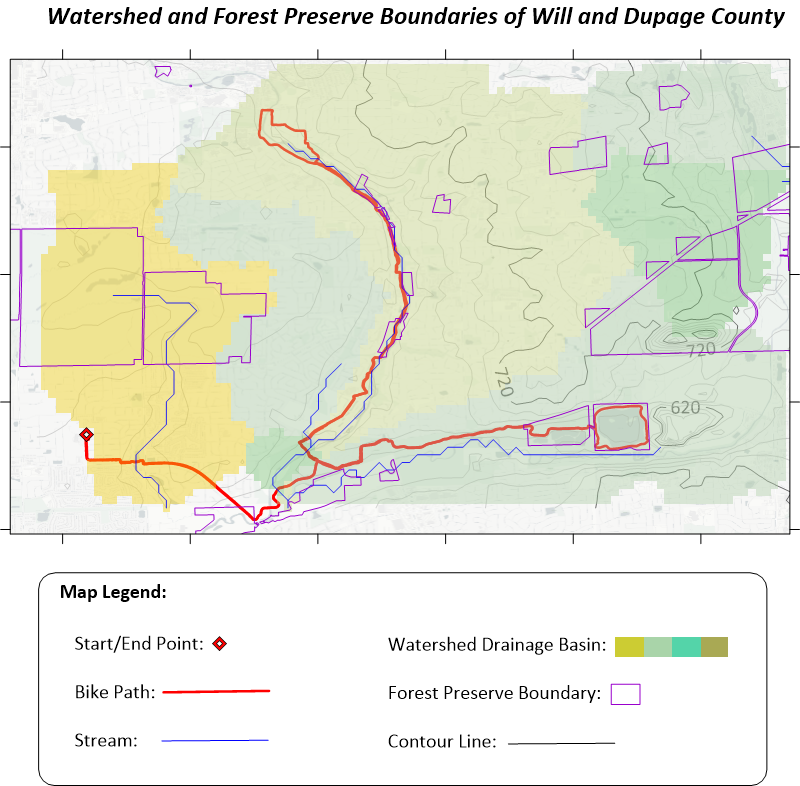 The final map of this article pictures a route along the DuPage River in Illinois. The DuPage River is a 28-mile-long river that is a small tributary feeding into the Mississippi River system. The DuPage flows through several towns and the entire watershed is interconnected due to the variety of forest preserves and parks the local park districts maintain.

Since it is so well maintained it is a delight to follow the trails through the lush green preserves that spring up along the flow of the river. With this map I wanted to highlight the watershed's drainage basins and streams using a Watershed layer in Surfer. The basins are represented by the opaque polygons following the color scheme in the legend. A basin highlights the extent of an area where water will drain from into the corresponding stream that sits within the polygon. Also pictured are the boundaries of the forest preserves in both Will and DuPage County since the river crosses through both counties. I downloaded these polygons as a SHP file from the Will and DuPage County GIS websites and added them as a Base(vector) layer.

I grew up in the Chicago suburbs and my family still live in the area. It was great to be able to go back and appreciate this route that passes through parks that bring back fond childhood memories. I even got to ride with my dad who has been a cyclist for as long as I can remember and really inspired me to get into biking myself. My personal highlights along this route include crossing the bridge over the DuPage in Knoch Knolls Park. As well as looping around Whalon Lake (a lake which is actually a filled quarry) and watching kayakers and fisherman on the lake. 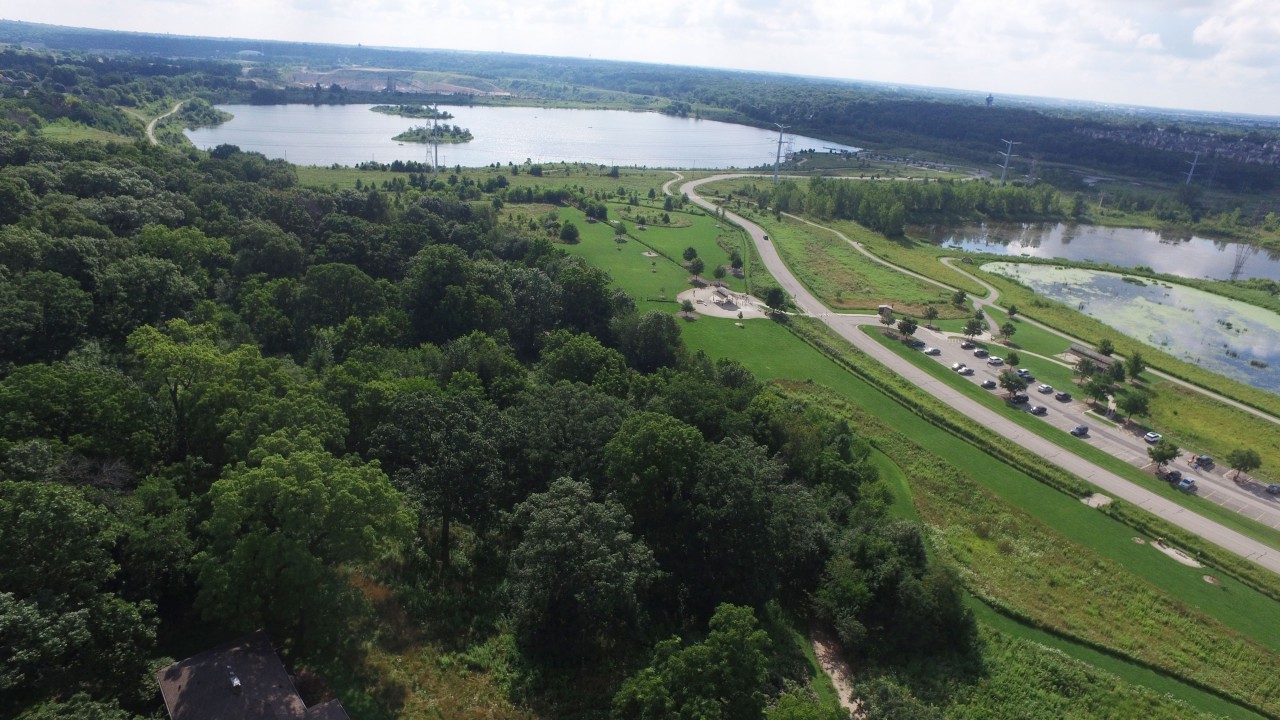 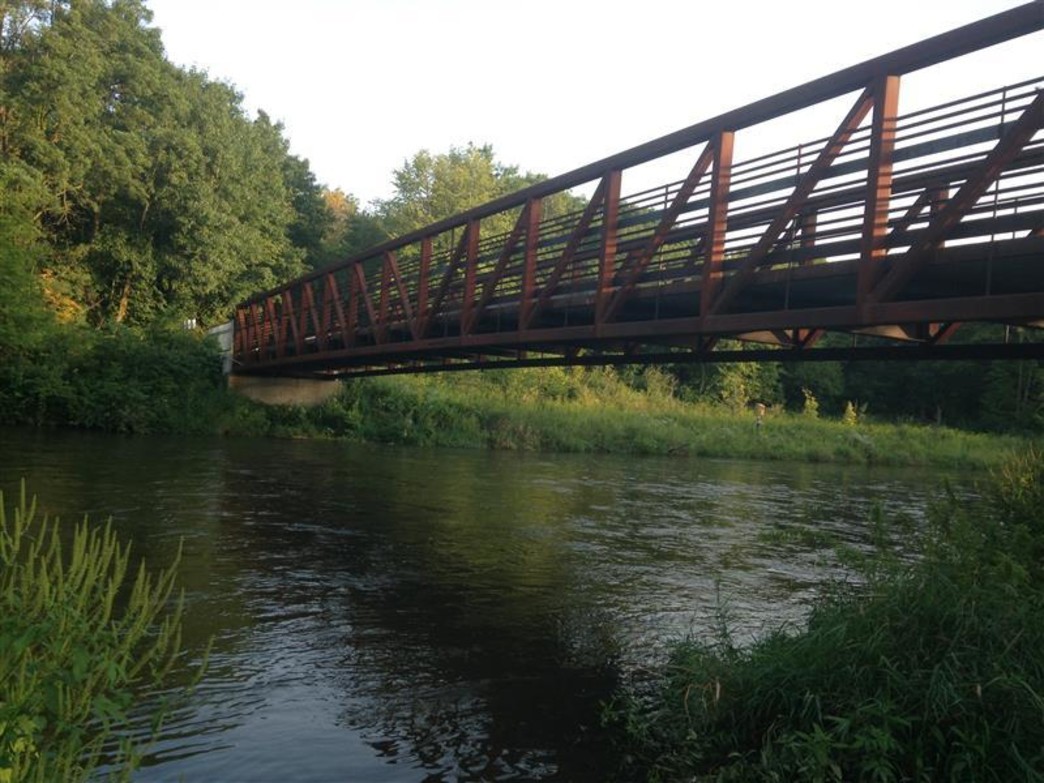 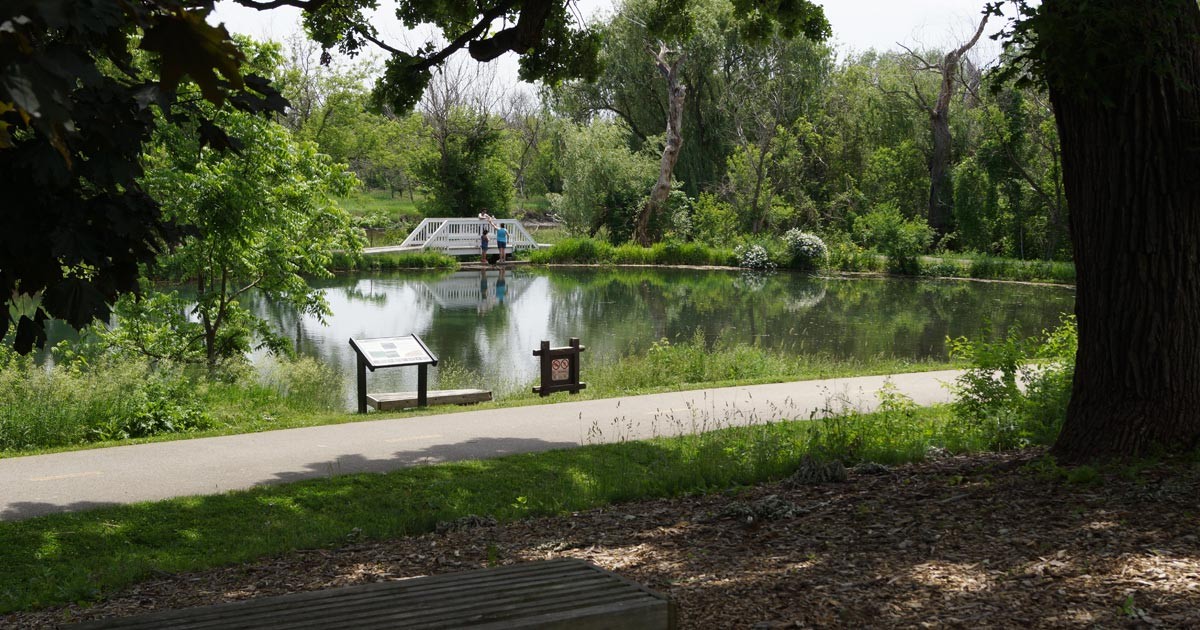 Pond and bridge in one of the preserves along the DuPage River (DuPage River Park East). Photo credit: Naperville Park District

There are plenty of other routes that I took off hiking, biking, or jogging on this summer that I could map as well. But, to keep this article brief, I'll do that in my own time. If you partake in any outdoors activity and want to track your efforts with real GPS data you can download Strava, or look for other alternative programs that do so! This article may only cover using GPS data to map physical activity, but the workflows used could be expanded into any field looking to monitor variable, moving data. Once your GPS data is collected, it truly is a joy to bring it into Surfer and map whatever your subject may be.

If you end up mapping your own GPS data in Surfer we would love to see it! Share what you create with us here: Tell the World Your Story