Customer Spotlight: The Velenje Coal Mine Benefits From Strater 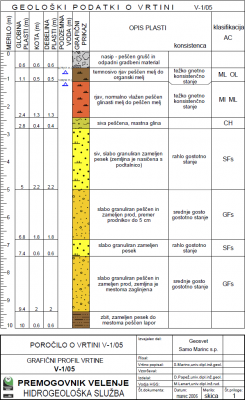 The Velenje Coal Mine operates on the largest Slovenian coal deposit and on one of the thickest known coal layers in the world. In 137 years of operation of the coal mine, more than 225 million tonnes of lignite have been extracted from the lignite layers, which are up to 165 m in thickness.

We use Strater for producing our reports of completed wells. Our reports are comprehensive text reports with graphics produced with Strater. We gather data for Strater from a database of wells. We create many template files, each with a different look, for different types of graphical reports. With Strater, we can also create cross sections from our exploitation field to represent different geological data.

History of the Velenje Coal Mine

The first mention of the deposits dates back to the 18th century, the first drillings were recorded in 1875 and the first opening of a mine in 1887. Already in the year 1905, the first lignite-fired thermal power plant was built near the coal mine. Coal production in the Šaleška dolina valley was at its peak after the World War II when the demand for coal increased exponentially.

The quantities of the produced coal kept increasing until mid-1990s. During this period, the Velenje Coal Mine provided more than three quarters of the entire amount of Slovenian coal. Modern mechanisation and their own mining method were barely sufficient to satisfy the entire demand for coal. In mid-1980, the Velenje Coal Mine reached the peak of annual production of coal, i.e. 5 million tonne.

The specialty of the Velenje mining method is the procedure introduced in the last decade: the procedure of controlled winning of roof coal by "pouring" over roof supports into the Longwall chain conveyor which provides very high production capacity with an extremely high level of safety and great economy. Current mining results are comparable with the top results in Europe. The Velenje mining method was the reason for the award presented in 2007 to the company Premogovnik Velenje by the Slovenian Chamber of Engineers: an award for innovation and innovative approach in engineering business.

The technological progress in the Velenje Coal Mine offers good opportunities for economic cooperation with other countries; particularly where there is a need for introduction of new technologies (cooperation with coal mines in Bosnia and Herzegovina, Serbia, Macedonia, Turkey, India, Asia-Pacific region). To these markets they bring knowledge, experience, equipment, programs, etc.

During the 137-year history of operation, the Velenje Coal Mine Group has developed, besides coal production, numerous other activities - both within the main company and in the associated companies. Today, these activities comprise a wide range of products and services through which the entire group expands its business operations. The Premogovnik Velenje Group employs numerous co-workers of different professions, with great experience and knowledge, which provide a guarantee that the sales program of the companies are of truly good quality and directed to the needs and desires of a wide range of customers.