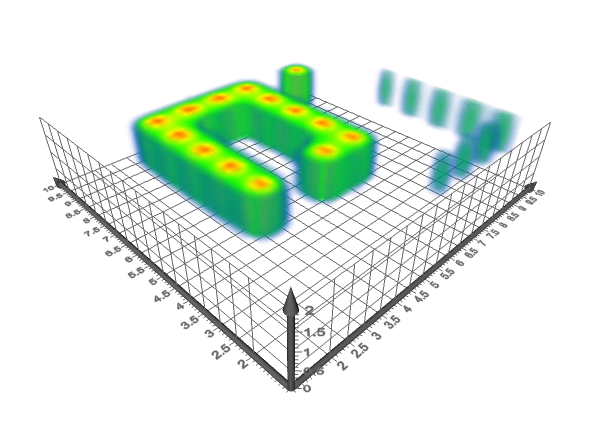 The Terra Exploration Group from Austin TX, who specializes in on-site geophysical surveys, is using Voxler to create 2D and 3D images based on data taken with the Terra EZ RES PRO earth resistance meter. This professional grade resistivity meter is deployed by geophysical surveyors who are trying to locate subsurface anomalies like water, mineral veins, caves, tunnels and even buried caches of treasure.

Here's how it works. The EZ RES PRO resistance meter is used to perform Electrical Resistivity Tomography surveys, also known as ERTs. An ERT survey is a noninvasive data acquisition technique that uses electrodes attached to small probes that are pushed into the surface soil at a specified distance apart from one another. The electrical current between the electrodes at the probe locations is then recorded. Subsurface objects or anomalies typically return higher (or lower) resistivity readings than that of the native soil and rock layers. The resistivity differences aide in defining the location of target subsurface objects.

During the survey, the probes are moved farther apart along a transect to take resistivity readings at different depths; the farther apart the probes are located, the deeper the ERT survey goes. The combined data from the different probe locations represent a slice of the subsurface, including any objects or anomalies. The ERT probes can be moved in a lateral direction to acquire data from multiple slices (on a grid), which can be then combined into a 3D point cloud and sent to Voxler for 3D imaging. Once the data for a survey area has been acquired, the Terra Exploration Group has simplified the process of compiling the data into a file format that is ready for use in Voxler. The group has developed a nifty technique that will parse the data taken from the meter and compile it into a single XYZC data file that is perfect for smooth importing into Voxler. More details about this workflow can be found on the group's YouTube page.

After the data has been transformed into an XYZC dataset, imaging it in Voxler is a simple endeavor. It needs to be imported as a point cloud, gridded, and then can be rendered using a VolRender or FaceRender module. When a multi-color colormap is applied to graphics display modules, subsurface anomalies really pop and can be easily detected. For example, in the image below, an underground tunnel network was detected using the EZ RES PRO meter and Voxler. This tunnel network was found on a Japanese site from World War II in the Philippines, where they were covered to be hidden from American troops. Years later, the Terra Exploration Group was able to discover the entrance to the network. As you can see, the tunnel anomaly was easily seen when visualized in Voxler. 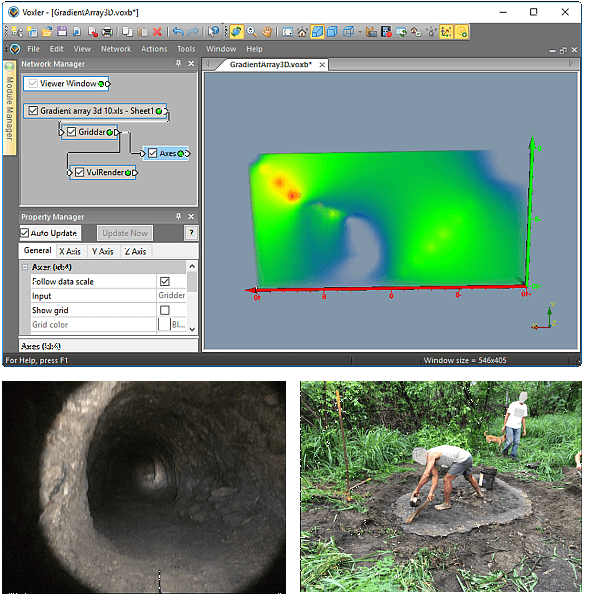 Robert Leonard from the Terra Exploration Group comments about employing the EZ RES PRO sensor and Voxler for archeological applications, "We are also now using resistivity and Voxler for near surface archeological applications as well. What we do is set our probes 1 meter apart (this give us ½ meter depth) on an upside down "T" contraption that we push into the ground and then take readings at equal intervals in a grid. We then put the numbers into Voxler and see what kind of picture it produces. What we are looking for is patterns that could indicate old foundations, walls, trash pits, graves, etc… For this application, Voxler is going to be EXTREMELY helpful because it will be able to piece together a large area and paint a bird's eye picture of what is just below the surface. We are very excited about this!"

Please reach out to EZ Res Pro for technical advice on exporting data out of their devices. You can view a list of Voxler's supported file formats here: http://voxlerhelp.goldensoftware.com/#t=File_Formats%2FFile_Format_Chart.htm

0 Cancel Reply
Hi Ernesto, Please reach out to EZ Res Pro for technical advice on exporting data out of their devices. You can view a list of Voxler's supported file formats here: http://voxlerhelp.goldensoftware.com/#t=File_Formats%2FFile_Format_Chart.htm Thanks, Justine
Cancel Update Comment

hello, i own terra ez. how to transfer the datas from terra to voxler for 3d view? the youtube page you mention in this blog is not available anymore.

0 Cancel Reply
hello, i own terra ez. how to transfer the datas from terra to voxler for 3d view? the youtube page you mention in this blog is not available anymore.
Cancel Update Comment

hello
ez res pro would like to get
price? and shipping? Turkey
Payment during the delivery? remittance before delivery?

0 Cancel Reply
hello ez res pro would like to get price? and shipping? Turkey Payment during the delivery? remittance before delivery?
Cancel Update Comment

We develop and sell Voxler, but we do not sell the EZ Res Pro sensor. Please contact their sales team if you wish to purchase their hardware. You can visit their website here: https://www.kellycodetectors.com/catalog/ez-res-pro

0 Cancel Reply
Hello, We develop and sell [url=https://www.goldensoftware.com/products/voxler]Voxler[/url], but we do not sell the EZ Res Pro sensor. Please contact their sales team if you wish to purchase their hardware. You can visit their website here: [url=https://www.kellycodetectors.com/catalog/ez-res-pro]https://www.kellycodetectors.com/catalog/ez-res-pro[/url] Thanks, Justine Carstairs Golden Software
Cancel Update Comment

If you have any additional questions, please reach out to us at support@goldensoftware.com as we would be happy to help!

0 Cancel Reply
Hello, Thank you for sending your question! Yes, Voxler can model inversion data. Surfer can also model inversion data, but cannot create models using XYZC data where Z is the elevation/depth and C is the inversion value. Surfer can model XYZ data where the Z could be depth/elevation [i]or[/i] inversion values. If you have any additional questions, please reach out to us at support@goldensoftware.com as we would be happy to help! Thanks, Golden Software
Cancel Update Comment