What do you get when six Golden Software team members embark on a 4-day trek into the wilderness? Comradery, epic team-building, fatigued muscles, renewed gratitude for common comforts, an appreciation for deodorant, and of course, an opportunity to map out their excursion in Surfer. The adventure began in Canyonlands National Park in southeastern Utah. The terrain consisted of flat-topped mesas and plateaus separated by steep canyon walls. Far within the canyons, distant riverbeds were hidden from view by thick and luscious vegetation. Hiking trails meandered through red rock channels cut by years of relentless wind and water, over steep sections of ancient slickrock, and through creek beds prone to flash floods. Along with some comments from the team, the rest of my blog with highlight some of the photos and the maps that were created from the GPS data they collected once they made it back safely to their home bases in the surrounding states. 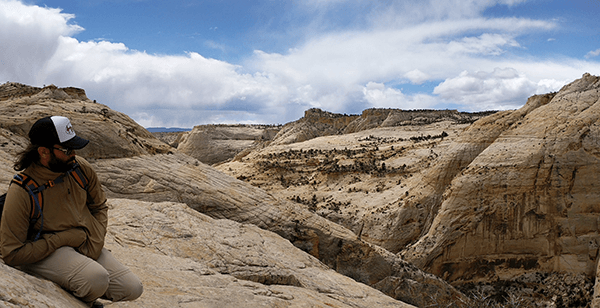 Zach Mills plans his descent over the slickrock while silently hoping he doesn’t trip on a shoelace. While that may reduce the time it takes for him to descend to the canyon floor, he’d rather proceed with the less-painful trek down. Experience pays off and he selected the correct route.

The destination for the first hike was Death Hollow, a dramatic canyon which required the team to descend 190 meters. The journey began easily enough with a 2 mile hike along the rim of the canyon. Thereafter, the team had to slip, slide, and crawl down steep sections of slickrock. For a time, the route was marked by cairns, but at some point, the group lost track of the cairns and spent a few hours searching for the route to the riverbed. After a few dead ends and drop-offs, the route was relocated and the team slowly made their way down to the Escalante River. From there, they hiked upstream until the Escalante River-Death Hollow confluence and proceeded up Death Hollow. Below is a map detailing the Death Hollow hike. GPS data of the team's journey was imported into Surfer. The hiking path, shown as the white polyline, was overlaid on a color relief layer based on a USGS National Elevation dataset (1/3 arc-second NED) downloaded from the National Map Viewer. A contour layer sourced from the same elevation dataset was included which highlighted just how steep the hiking terrain really was. The distance covered along with the elevation changes can be clearly seen in the profile map. "There were times when I had to bear crawl up the slickrock because it was so steep," said our CEO, Blakelee Mills, about the Death Hollow ascent. "Every now and then I'd look down and get butterflies. It was a rush!" 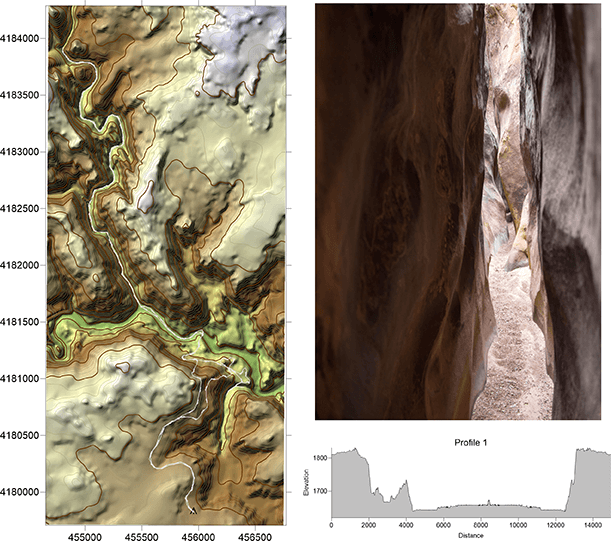 A contour map of Golden Software's day 1 hike that is accompanied by a profile and an image that was taken along the trek.

While the second day of hiking didn't require the bear crawl, it did cover a fair amount of territory. The group hiked the Old Boulder Mail Trail which was used by mail couriers to deliver mail between Boulder and Escalante, UT. The group began at the trailhead outside of Boulder, UT and hiked the 7 kilometers to Death Hollow. Only two members of the group ventured to the bottom of the canyon while the rest relaxed on the canyon rim, soaking up the breathtaking views before turning around. 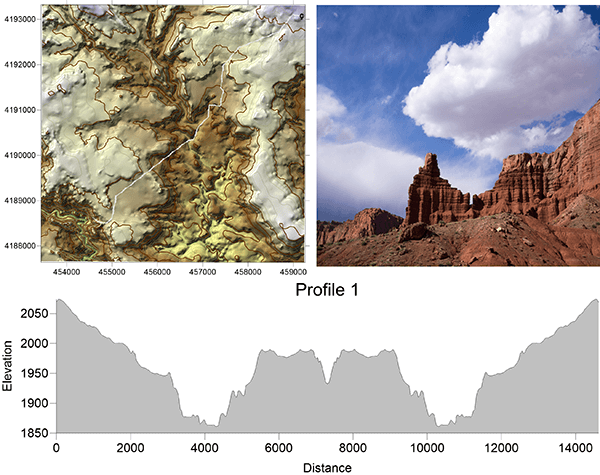 A contour map and profile of Golden Software's day 2 hike to Old Boulder Mail Trail that is accompanied by another image that was taken along the trek.

Following the excursion, I sat down with a few of the adventurers, after they all showered, of course, to hear about their trip. "Spending time and talking with everyone, whether it was on the trail, around the campfire, or in the car was the most memorable part of the trip for me," said Zach Mills, our documentation writer and product manager. Developer, Brian Alexander, added, "My favorite part of the trip was the hike on the second day - actually, it was the breaks during the hike on the second day. We'd hiked a lot the first day and then the second day came around and it felt good to stretch out and move again for a while. And then your legs are tired and it feels so good to sit down on the warm, hard rock, drink a little water and talk about whatever happened to cross your mind. We talked about books we'd read and books we'd probably enjoy reading and places we'd been and people we knew and other things that we liked or did. Just sitting down for a few minutes and talking was enough to clear your mind so that when it was time to get up, we'd have to look around for a minute just to remember where the trail was and where we were going."

The Golden Software team in good spirits. Luckily everyone made it home with all appendages.

"There's something to be said about going off the grid and spending time in nature," said Blakelee Mills. "It's rejuvenating, refreshing, and remarkable." This quote sums up the overall experience of the team and emphasizes why these yearly adventures are such an important part of Golden Software.