March brings one of most highly anticipated US sporting events of the year, the NCAA Division I Men’s Basketball Tournament, commonly referred to as March Madness! The term was coined in 1939 by H.V. Porter, but didn’t gain widespread popularity until the early 1980s. This year’s single-elimination tournament began with 68 teams on March 15, and we’re now down to the Sweet Sixteen! Let’s take a closer look at some tournament stats with graphs created in Grapher 12!

Though not the most watched sporting event in the US (football reigns supreme!), the tournament is quite popular. In fact, I recently read that many men in the US schedule elective surgeries for the month of March to take advantage of the many games available to watch while recuperating. So, how does this tournament stack up against other sporting events? See the graph below to find out! 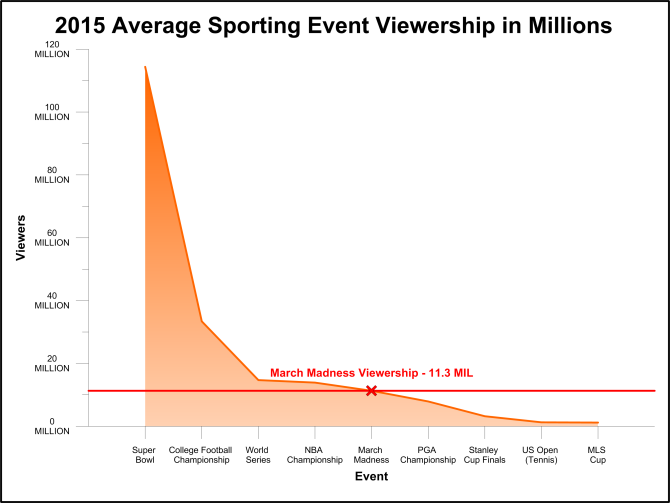 Grapher 12: Average television viewership of major sporting events in the US in 2015.

2016 has already been an exciting year for the tournament, and I can understand why it’s called “Madness”! According to sbnation.com, for the first time in NCAA Tournament history, 3rd, 4th, and 5th (conference) seeded teams lost first-round games on the same day. Also for the first time in tournament history, 10 teams seeded 10th or worse in their conference advanced to round 2. A few of the big upsets include Hawaii’s victory over California, Texas’s loss to Northern Iowa, and Stephen F. Austin’s win over West Virginia. In possibly one of the biggest upsets in NCAA Tournament history, only 6 perfect ESPN brackets remain after my alma mater Middle Tennessee State University (Go Blue Raiders!) beat Michigan State University.  Michigan State was favored to win the tournament, or at least make the Final Four, according to several polls. The graph below shows the NCAA tournament history for MTSU and MSU since 1955. 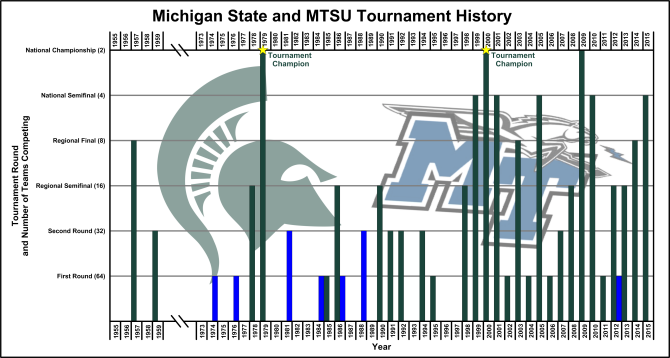 Based on each team’s tournament history, it’s easy to see why this game was such an upset. Michigan State has 2 championships under its belt and 29 tournament appearances, compared to MTSU’s 7, where they’ve never advanced past round 2. 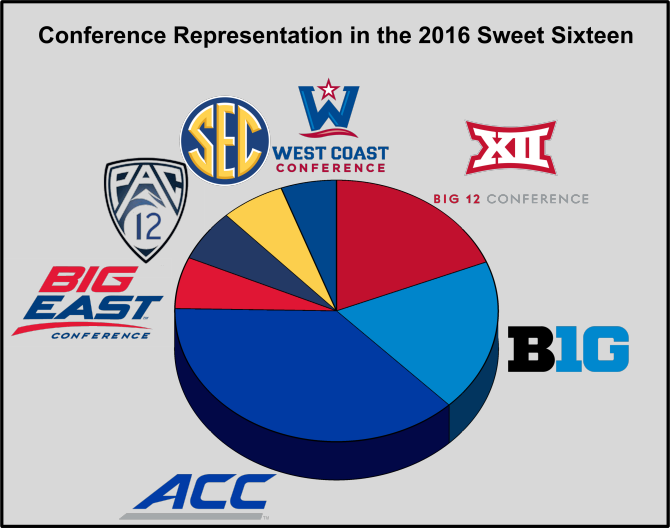 Breakdown of conferences represented in the Sweet Sixteen in the 2016 NCAA Men's Division I Basketball Tournament; 3D pie chart created in Grapher 12.

Each team played between 34 and 36 games before the Tournament began. The graph below shows each team’s number of wins, number of losses, and percentage of wins out of total games played. The teams are listed in order of overall tournament seed, with Kansas seeded 1st and Gonzaga seeded 44th. 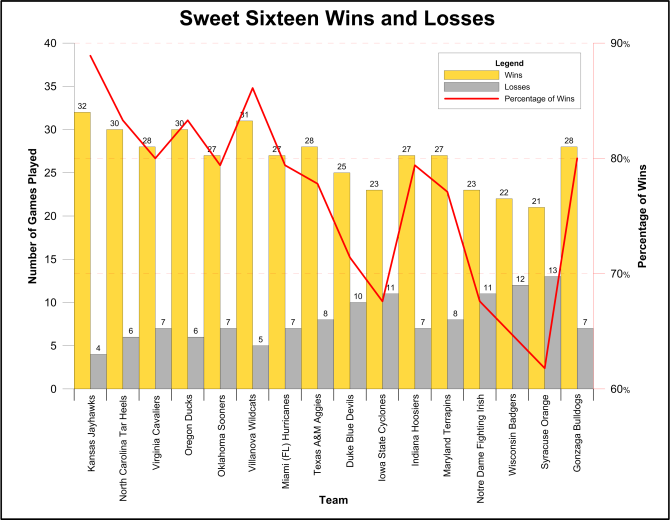 I hope you’ve enjoyed this graphical look at March Madness as we all wait for round 3 to see who makes it to the Elite Eight. Good luck with your brackets, and it’s never too early to begin tracking and graphing statistics for next year’s tournament in Grapher 12! Get your license here!