Laying Out the New Lunar Year 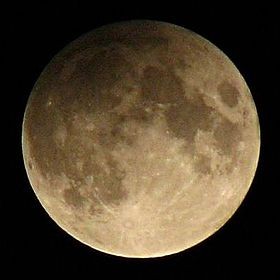 The internet is slow. Focus has been hard to come by, and it seems like all is on the fritz! It’s a full moon tonight for us here in Colorado, there is a comet streaking across the sky, and a lunar eclipse is also visible. Could this be coincidence or the influence of something greater??

In attempts to understand this Earth we live on, mankind has often looked to the sky. The stars have been used for navigation, and the sun has been used to tell time during the day. It’s fitting that the moon has also played a part in man’s desire to understand what is going on around us. Though many beliefs have since been debunked by science, we have at some time or another thought that the moon controlled fertility, birth rates, blood loss rates, sleep quality, and other human behavior, such as mental illness and epilepsy (as in lunacy, lunatics, etc.). You may have heard reports of increased crime or people acting irrationally due to a full moon. Additionally, the moon is used in some gardening and farming techniques, including biodynamic agriculture. Some believe the moon’s gravitational pull affects water in soil, much like it affects larger bodies of water. Even the legendary werewolf could not escape the pull of the moon.

We do know that the moon affects tides with its gravitational pull, and the phases of the moon are a good indication of passing of time. Each lunation, or lunar month, is approximately 29.53 days, and each lunar year is 354 days. While the moon may not seem to have the effect on our daily lives that it did before modern science, many cultures have calendars based on the moon’s phases. Some of these calendars include the Hindu calendar, Islamic calendar, Chinese calendar, Jewish calendar, and Baha’i calendar. January 28, 2017 marked the lunar new year, which is also the Chinese New Year. It is the first new moon of the first calendar month of the year.

Special moon phases also exist. Some of these phases are 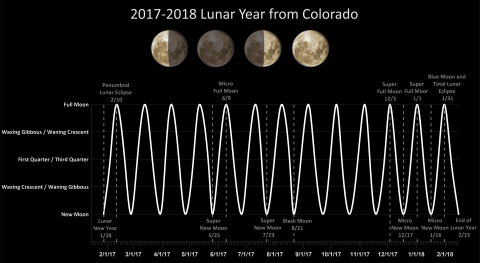 Line plot of moon phases for the current lunar year, created in Grapher. Click for a larger image.

As we come upon the first full moon of the lunar new year tonight, be mindful of the low low tides, the high high tides, and of course, the lunatics!