As an avid outdoorsman in Colorado, I am always making sure I know what the current local weather pattern is going to do. Whether I’m going into Rocky Mountain National Park for a day hike, attending an outdoor show at Red Rocks amphitheater, or riding in the weekly Denver Cruiser ride, I have learned over the past 17 years that the weather in my colorful state is always unpredictable! I know I need to consult the forecast to see if I need to wear a rain jacket, pack a sweatshirt, cover myself with sunscreen, or a combination of all 3 before I embark on my journey. However, the past weeks and even few months seem to change this mode of thinking. The weather has been more predictable than past years; it’s going to be hot and dry.

There has been a lot of buzz in the media lately about El Niño and the global heatwave this summer. This piqued my interest; I was curious if Colorado was experiencing the same trend locally compared to previous years’ temperatures. My mapping professional side couldn’t balk at the opportunity to create some maps that compare the summer temperatures over past years in hopes to find some obvious temperature-increasing trends.

For this mapping project, I have decided to use Surfer to create contour maps of Colorado’s monthly average temperate in July over the past 7 years to determine if we are seeing the same heatwave trend locally as what is being reported globally. I was able to access data from the NOAA Climate Prediction Center for the maximum daily temperature for July from 2010 through 2016. I downloaded the daily data in TIF grid format and used Surfer’s Grid | Math functionality to combine all of the data into a single, monthly average for each year. The data was also converted from Fahrenheit to Celsius for easier interpretation. To do so I used these steps:

Now all of the daily data has been averaged over the month of July for their respective years, I can create contour maps in Surfer for comparison. I created a separate contour map for each year, using the same contour interval and color map so that the maps could be easily compared to one another. The maps were scaled the same and posted next to each other to see if Colorado is on the same track as the rest of the globe. The resulting contour maps are below, showing that the monthly average temperature from year-to-year varies, but it is difficult to isolate a spatial trend between the years. I definitely cannot tell that this July is hotter than any other of the years I downloaded data for. 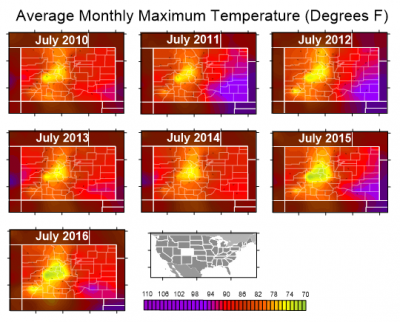 A comparison of Contour Maps from Surfer that depict the average maximum temperatures in Colorado for July 2010 - 2016.

To create the average monthly temperature grids for the previous 6 years:

To difference the monthly average grid and the July 2016 temperature grid:

A contour map was generated in Surfer that shows the temperature departures for this July compared to the previous 6-year average; shown below. This map shows that the temperature in July has remained relatively unchanged for most of the central mountain region (central portion of the map) and the only notable temperature increases are in the southwest portion and on the eastern planes of Colorado. 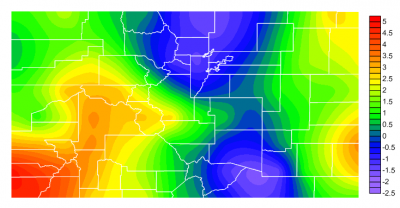 A contour map showing the degree departure in July 2016 from a 6-year average of maximum temperatures in July in Colorado.

As you can see, utilizing the differencing technique from Surfer’s Grid Math feature proved to be a better analysis approach for determining what areas in Colorado are seeing the same heatwave trend that is being reported across the US and globally than comparing contour maps. Surfer is developed by Golden Software, please feel free to take a look at the free demo version and place your orders at http://shop.goldensoftware.com.