It seems that this year is one of the colder and wetter years in my recent memory, at least in Colorado. Several ski areas have stayed open or have reopened every weekend past the original closing date because of additional snow fall. At least one ski area was still open this June, which is traditionally biking, hiking, and mountain climbing season. Trail Ridge Road in early June reportedly had 20 foot deep snowbanks in places, which is some of the highest I can remember. I recall back in the spring hearing about winter 2016 being one of the strongest El Niño years. So, I began to wonder, did we receive more precipitation this year because of the El Niño? Does Colorado normally receive more precipitation in El Niño years? And, because I love to see actual data and graphs “proving” the results, how can I visualize this?

I started by collecting precipitation data from NOAA for the entire state of Colorado. The data only went through the end of April, 2016 so I wasn’t able to evaluate the last 6 weeks of data. I compiled the data from 1950 to 2016, using only the data from January through the end of April. I then separated the data into El Niño years, La Niña years, and Normal years, based on the oceanic niño index information. I then created a bar chart in Grapher displaying the data. I was surprised to discover that it didn’t seem to affect precipitation over the entire state whether the ocean temperatures were cool (blue bars) or warm (red bars). 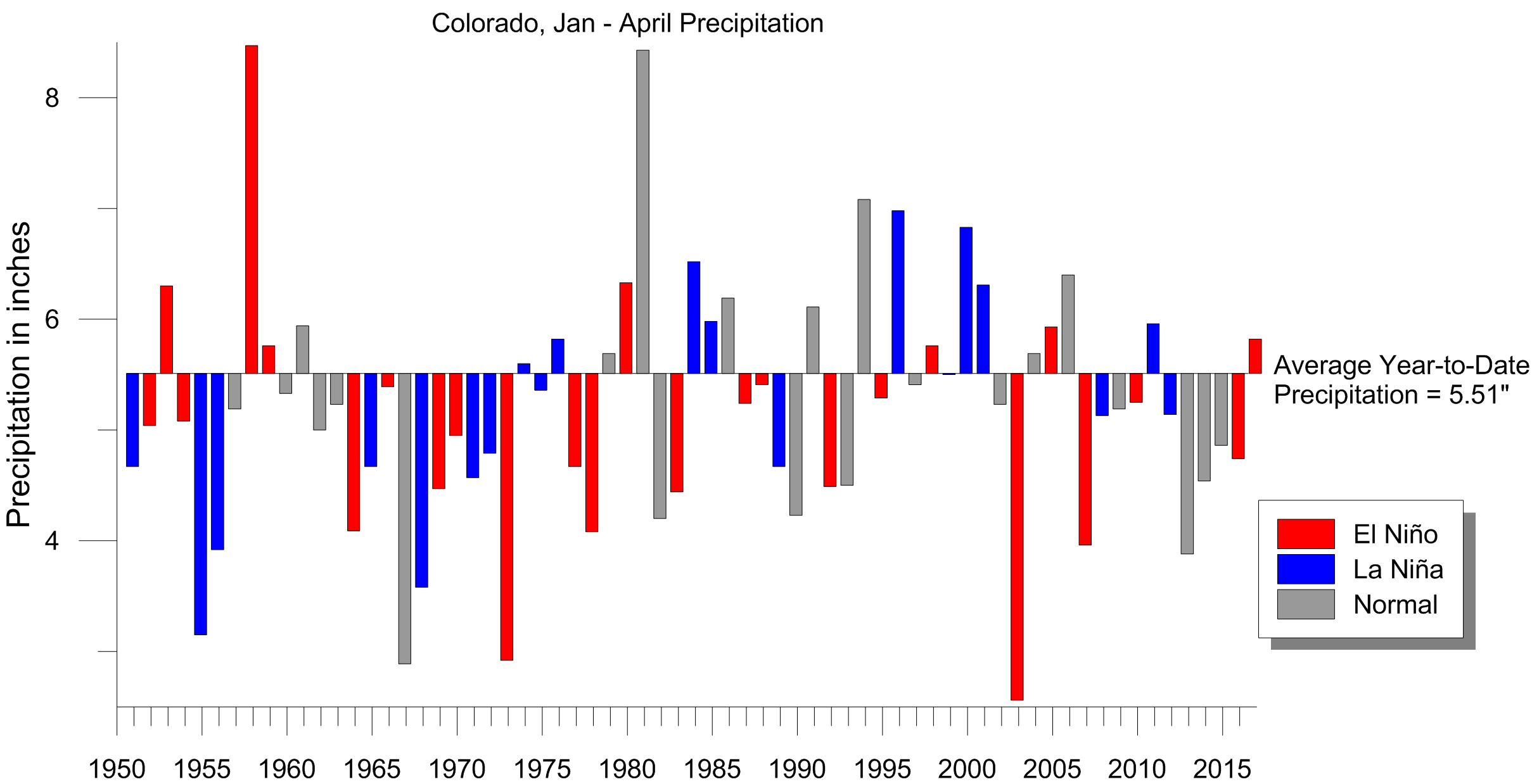 But, my theory that it was a wetter than average year was confirmed. However, it is only the wettest in the last 5 years. In the last 66 years, it ranks as only the 18th wettest.

I then decided to look at just the data for the Platte River drainage, which includes only the northeast portion of the state, including Rocky Mountain National Park and a few of the ski areas. Again, I decided to look at only the January through April precipitation totals. Again, I was surprised to see that the ocean temperature wasn’t a good predictor of more local precipitation. 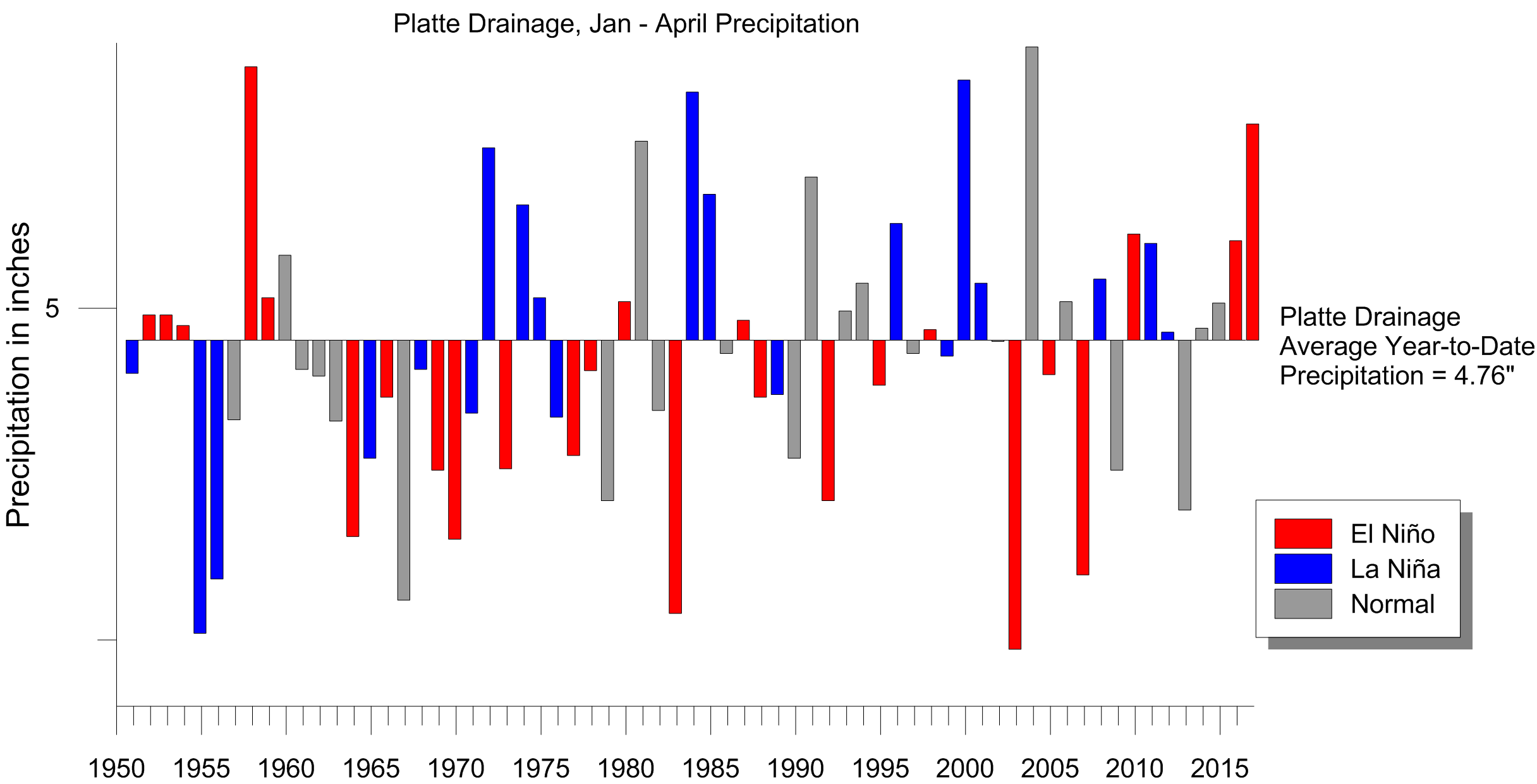 But, I did find that the precipitation has been higher than average for this area, the fifth wettest year in the last 66 years and the wettest in over a decade. 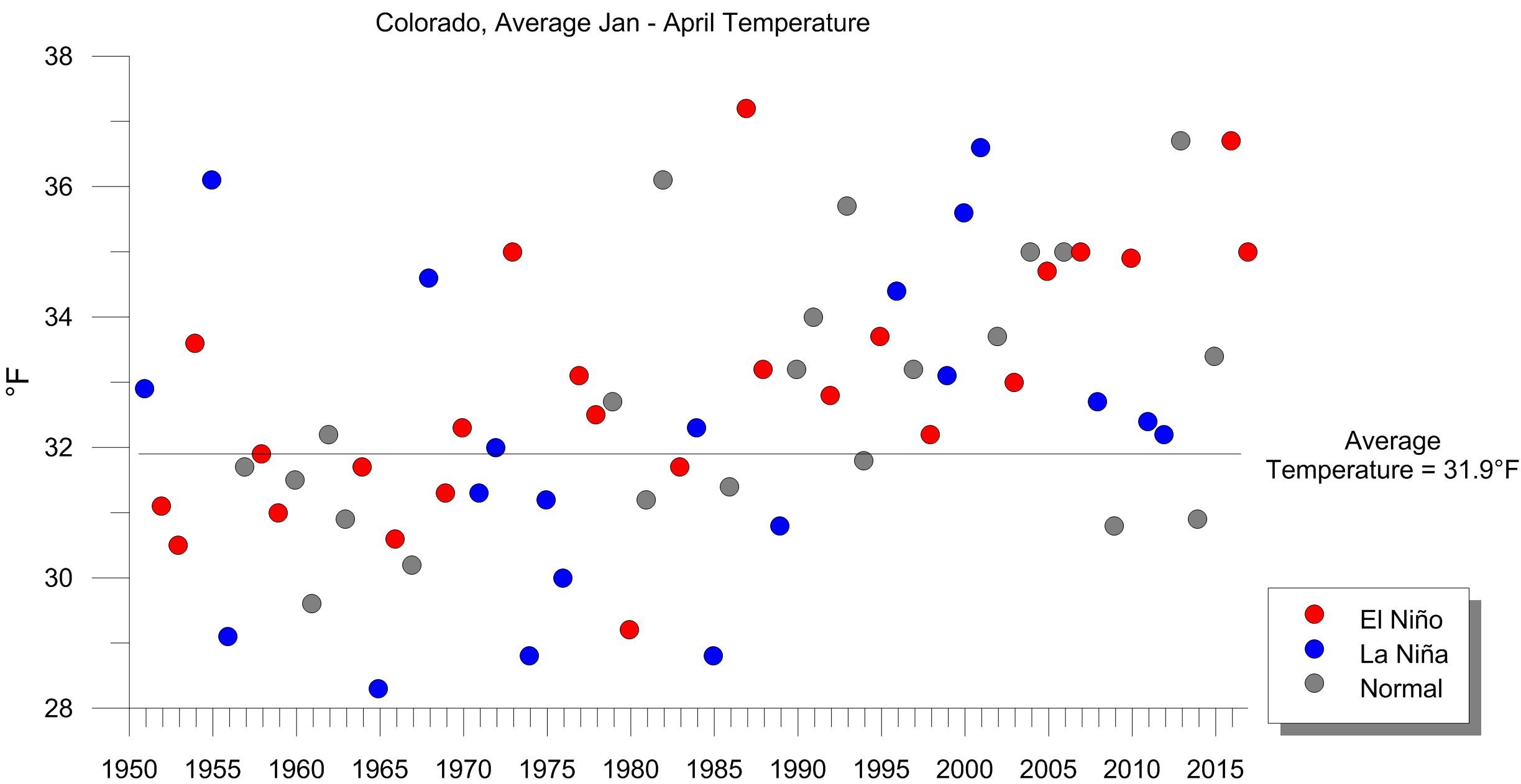 So, for me, at least, there is no quick way to guess whether my home area in Colorado will have a year with heavy snow and cooler temperatures based on the El Niño-La Niña determination. But, I did discover my theory in the wetter-than-normal year was correct, at least for my small slice of the world. This past weekend, my family traveled over Trail Ridge Road. This is a trip that we take at least once a summer, so I was able to visually compare the area to past years. There was definitely more snow at higher elevations, which meant the growing cycle had not yet begun in ernest. I did see some snow drifts that were much larger than in recent years, but nothing 20 feet deep! Oh what a difference more snow makes. 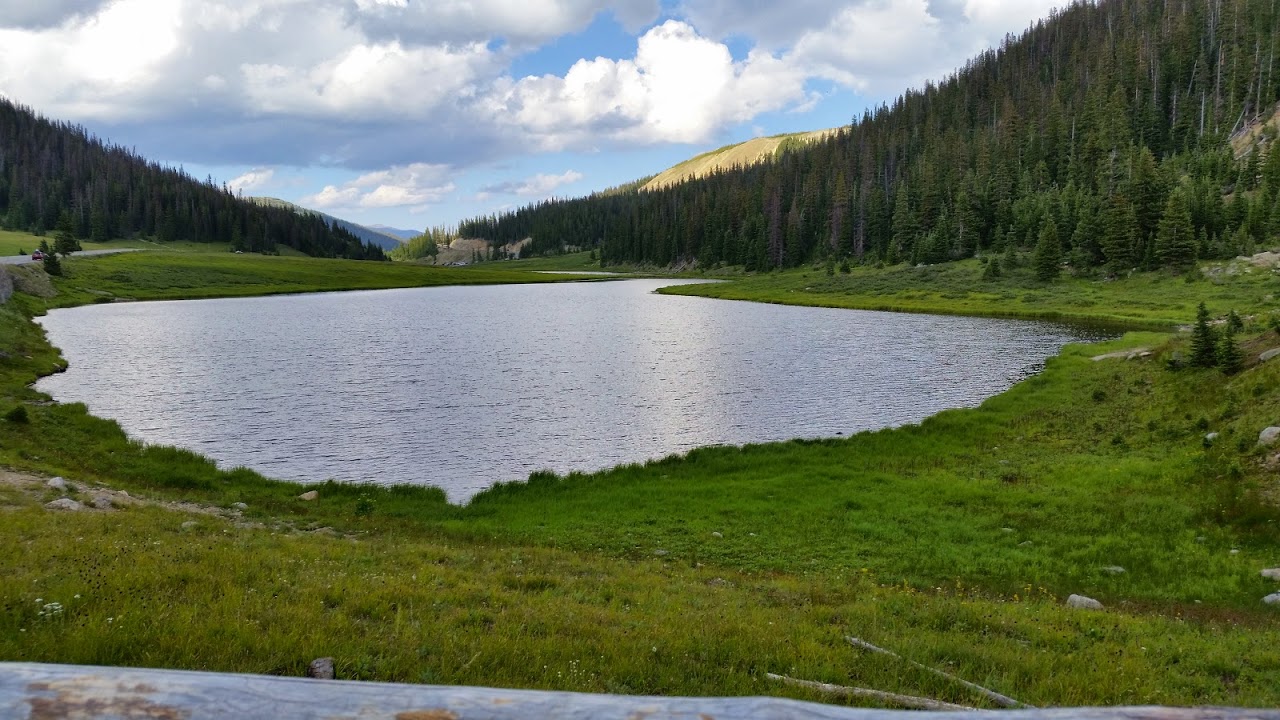 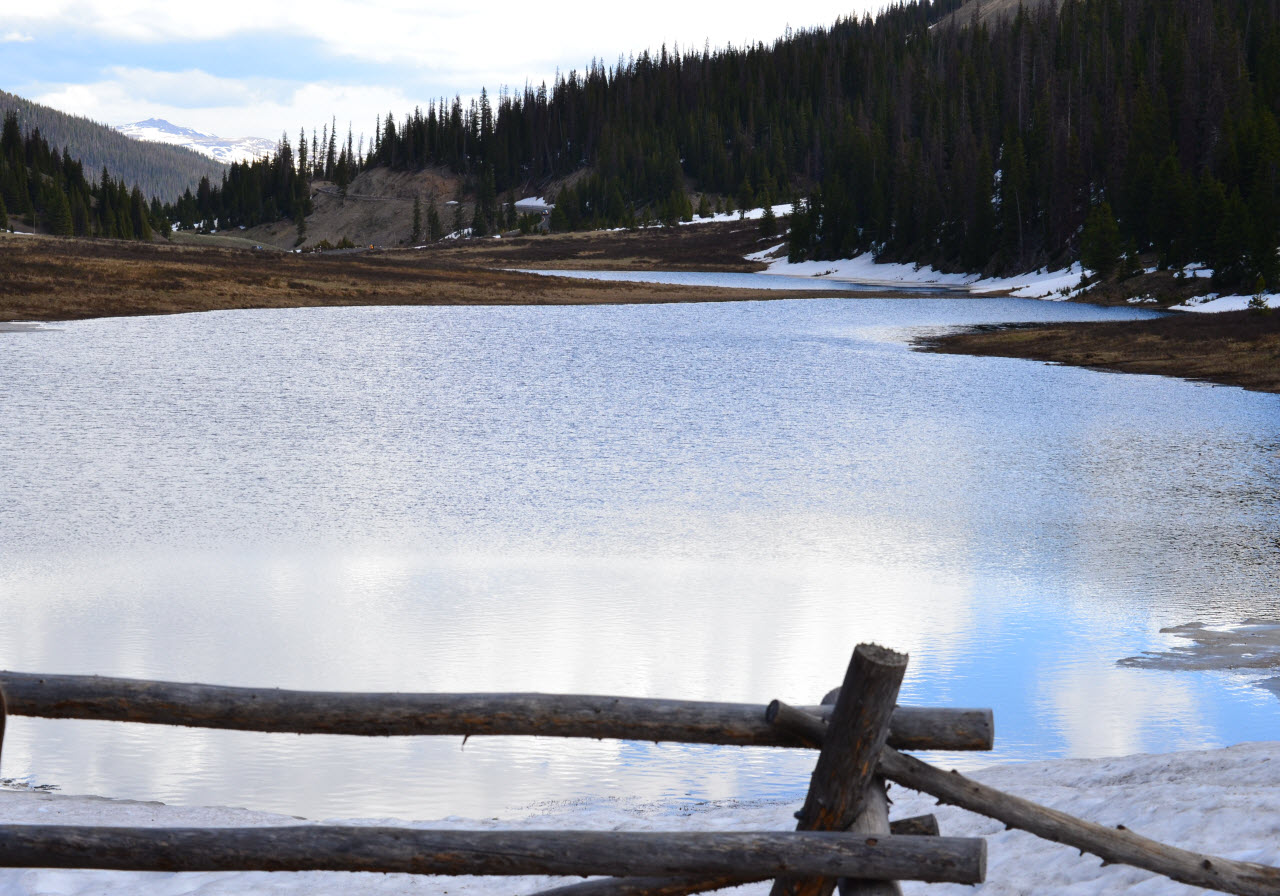 Poudre Lake, near Milner Pass along Trail Ridge Road, shown on the left in early summer 2012 (dry year) and on the right in June 2016 (wet year). Once the snow melts, the area should look similar to 2012, with more flowers and growth due to the additional moisture.