In April of this year, I blogged about taking a vacation to Ireland with my husband, and proposed a map of places we would like to see (see Safe Travels blog for this first article). In May we finally took that trip. Contrary to our initial plans, we did not rent a car, we instead signed up for a 9-day tour of the island through Paddywagon Tours. With the help of Surfer and my Canon Rebel camera, I'll now walk you through our fantastic trip to the majestic Emerald Isle.

On Thursday May 17th we arrived in Dublin, and proceeded to spend that day and the next investigating all that the city had to offer. From our centrally-located hotel (Paramount Hotel near Temple Bar), we were able to walk to Dublin Castle, Trinity College, and more, and we utilized the DoDublin bus pass to see those sights that were farther away. Along the way, we got our first taste of a variety of delectable local cuisines (such as the delightful scones at Keoghs Cafe). 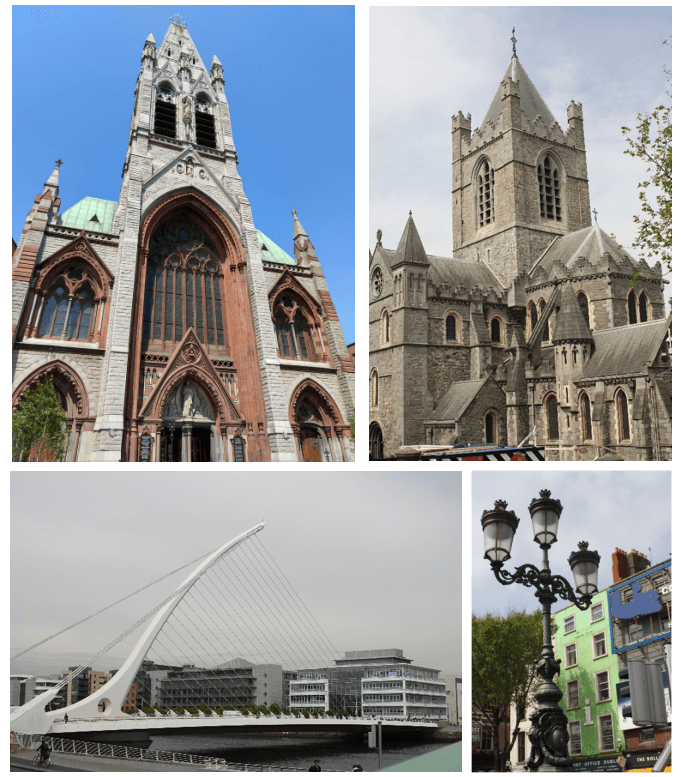 Dublin has many historic and modern sites to offer travelers, including Christ Church Cathedral (top right) and the Samuel Beckett Bridge (bottom left).

On Saturday May 19th, we began a whirlwind 9-day tour, which would take us around the entire island. The approximate route we took is mapped below, along with the stops we made, and what days they corresponded with on the tour. 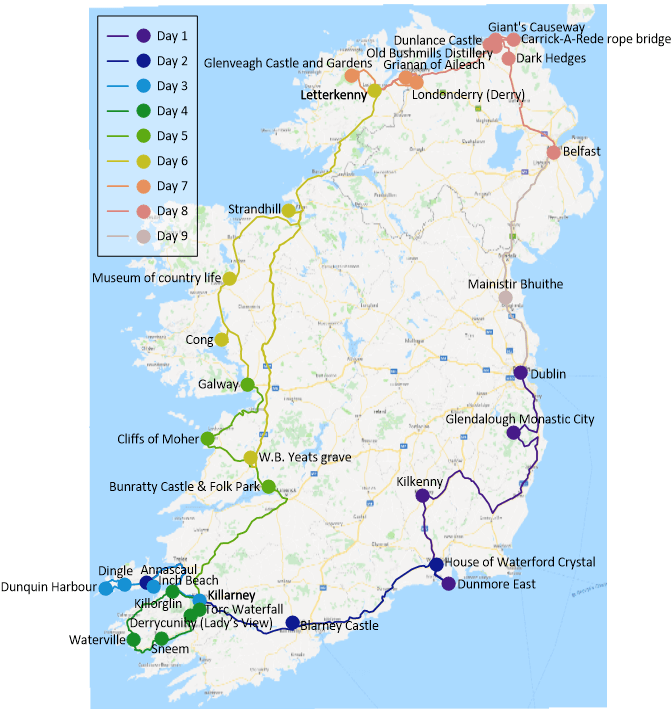 Surfer’s base symbology feature allowed for color-coding each stop we made on our tour, as well as the probably paths we took to get from place to place.

This first day, we started by visiting Glendalough Monastic City, where we bought a doll for my daughter. Next we headed to Kilkenny, where we walked around St. Mary's Cathedral, got a yummy lunch of grilled cheese, tomato, and onion sandwiches at Café 22, and took a guided tour of the sprawling Kilkenny Castle. Finally we headed to Dunmore East, where we had a fantastic mushroom pasta dish at Ocean's Hotel before turning in for the night. 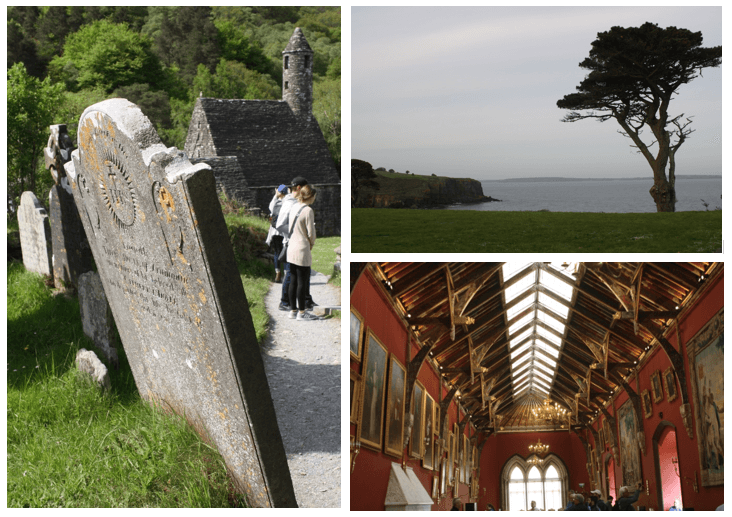 The second day started with a guided tour of the House of Waterford Crystal, after which we made our way to Blarney. We didn't kiss the Blarney stone (so many lips, and such a long line!), but we did have a great time wandering around the extensive grounds and gardens, and we found a 'Spuddy' (stuffed animal potato with pockets and crazy hair) at the gift store for my son. We ended the day in the miniscule Annascaul, where we had the Randy Leprechaun pub all to ourselves. 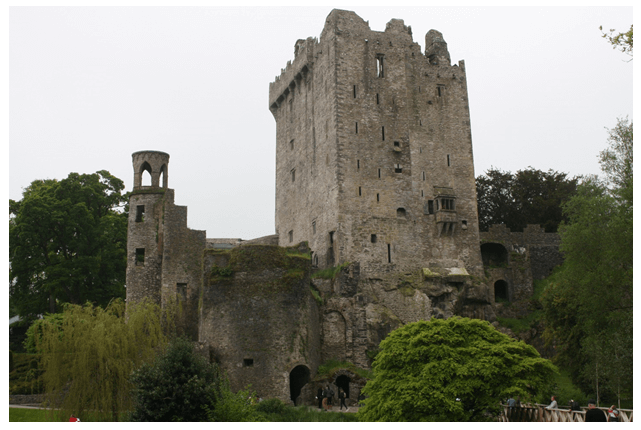 Blarney Castle, which wasn’t on our initial list at all, turned out to be a lovely trip with lengthy trails through sprawling grounds and many gardens, including the Poison Garden.

The third day started with a quick stop in Dingle, after which we drove the Slea Head drive. Along the way we stopped by Dunquin Harbour and walked the leg-burning ramp down to the water. We stopped off in Dingle again for a lunch of the best seafood chowder I've ever had (at Long's Restaurant in the Dingle Bay Hotel). Next we took a short break at Inch Beach, and then made our way to Killarney for the final stop of the day. 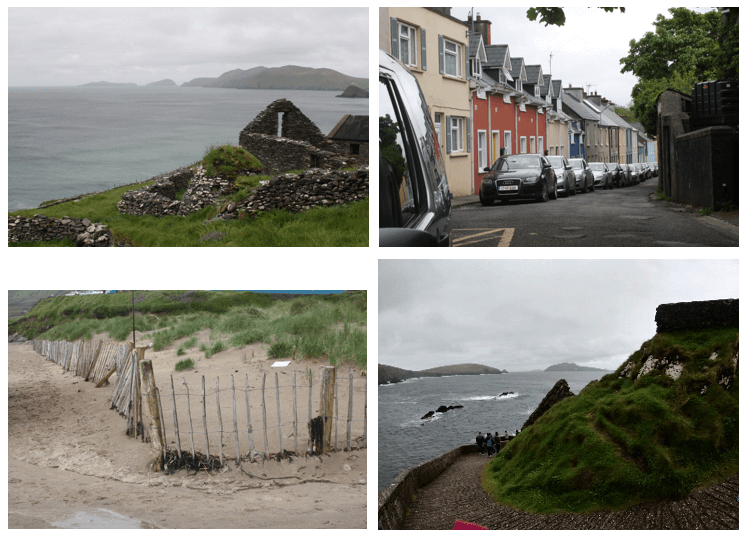 Slea Head drive took us along the scenic southwest coast of Ireland (top left) past Dunquin Harbour (bottom right). Dingle (top right) provided a chance to try unrivaled seafood, and Inch Beach (bottom left) gave us a chance to dig our toes in the sand.

The fourth day started with a drive around the Ring of Kerry, during which we stopped off at Killorglin, Waterville, and Kerry Geopark, and took in the sights at Lady's View (Derrycunihy) and Torc Waterfall. When we returned from the drive, we boarded Bob the horse's carriage for a relaxing jaunt through Killarney National Park. The day wound down with a group dinner, followed by drinks and toe-tapping live music at Sheehan's Traditional Pub (Killarney Grand Hotel). 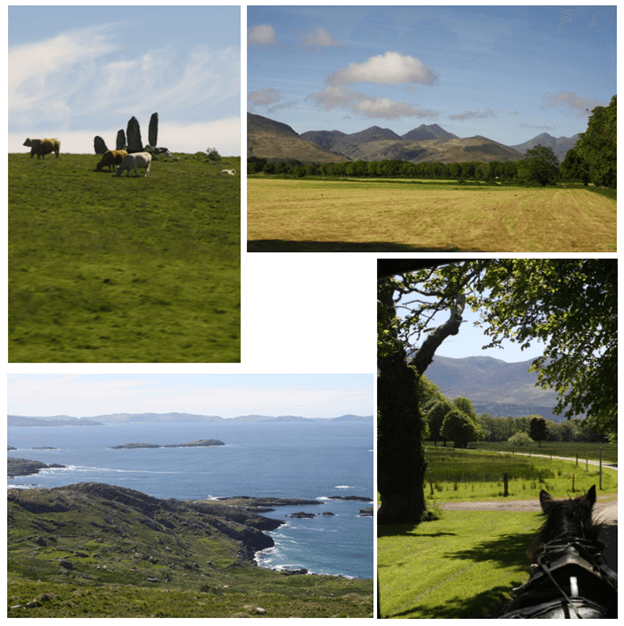 The Ring of Kerry provided spectacular views of both mountains (top right) and ocean (bottom left), with additional pretty views along the way (top left). After sitting in the bus for so long, it was nice to breath some fresh air as Bob (bottom right) took us on a horse-drawn carriage ride through Killarney National Park.

The fifth day started with a quick visit to Bunratty Castle & Folk Park, followed by a trip to the Cliffs of Moher. We took a boat-trip along the bottom of the cliffs, and then navigated the crowds and got our daily quota of exercise on top of the cliffs. The day concluded in Galway. 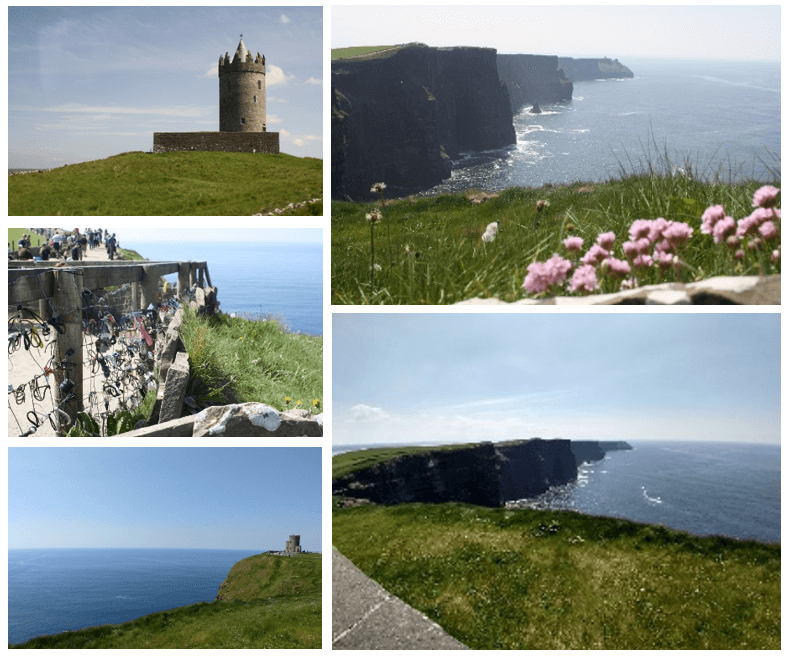 The Cliffs of Moher have been featured in many movies, including Harry Potter and the Half Blood Prince and the Princess Bride. After visiting this majestic site in person, I have no doubt why.

The sixth day started with a vast breakfast buffet including homemade crepes and a cheese spread at the Connacht Hotel. After eating, we set out for Cong, where we looked around Ashford Castle Estate and Cong Abbey. From there we went to the Museum of Country Life, and then it was on to Strandhill for a late lunch at the Strand Bar. Next, we visited W.B. Yeats grave. We concluded the day in Letterkenny, where I had some mouthwatering slider hamburgers at the Warehouse Bar & Kitchen. 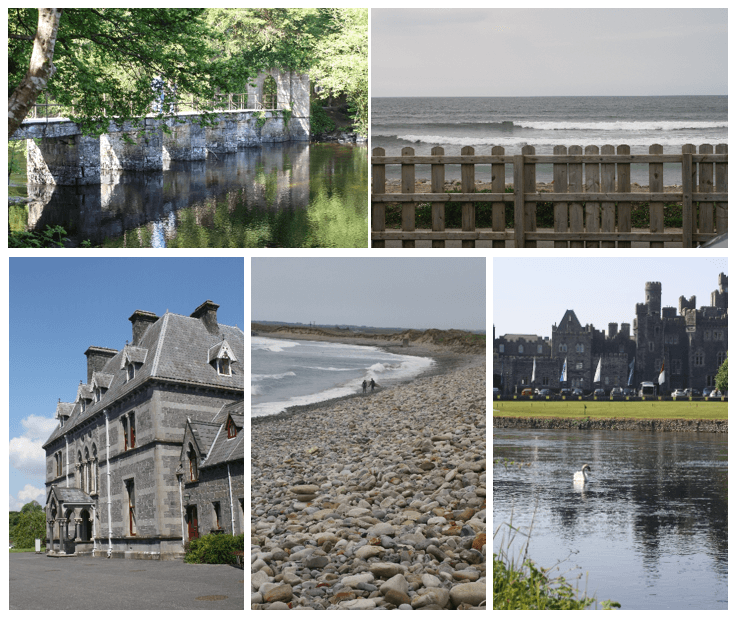 Cong (top left and bottom right) afforded both castle views and forests with water features. The Museum of Country Life (bottom left) provided a look at how the rural Irish used to live. Strandhill (top right and bottom center) is known for great surf waves.

​The seventh day started with a tour of Glenveagh Castle and Gardens. Afterwards, we stopped by the scenic Grianan of Aileach for a panoramic view on the way to Londonderry. In Londonderry, a tour guide hopped on our bus and provided commentary as we drove around the city. Then we hopped off the bus for a walk down the Peace Line wall running through the city. We ended the day back in Letterkenny, where I had the best woodfire pizza I've ever had at Lily's Coffee House & Bistro. Drinks at Warehouse Bar & Kitchen capped off the night.

A guided tour of Glenveagh Castle was quite interesting, and the Gardens were absolutely lovely (top left and center). Grianan of Aileach (bottom left) seemed to be in the middle of nowhere, but was well worth the drive due to panoramic views. Londonderry (bottom center and right) was our first foray into Northern Ireland.

The eighth day started with a quick stop by the Old Bushmills Distillery, followed by an equally quick drive by Dunlance Castle. From there, it was on to the Carrick-a-rede rope bridge, after which we headed to the hexagonal geologic marvel that is Giant's Causeway. Finally, we had a brief stop at the Dark Hedges (featured on the wildly popular TV show Game of Thrones) on the way to Belfast, our final stop for the day. 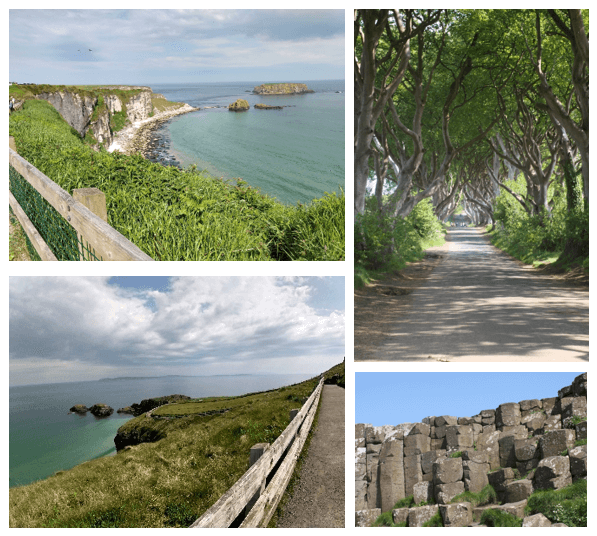 The path to the Carrick-a-rede rope bridge (top and bottom left) contained breathtaking views, whether or not you paid to cross the bridge itself. The path to the Dark Hedges (top right) contained many fun little fairy houses, and the hedges themselves provided nice shade. Giant’s Causeway (bottom right) was quite busy, but was still beautiful, and was easier to climb than expected.

The ninth day started with a self-guided tour of the Titanic Belfast museum, after which we had a fantastic croque monsieur in the Gallery Cafe. Then we took a black cab tour, which stopped at various significant tourist destinations for commentary and pictures. On the way back to Dublin, we swung by Mainistir Bhuithe (cemetery home of very large crosses), and then we were back, saying goodbye to some new friends and making plans with others. 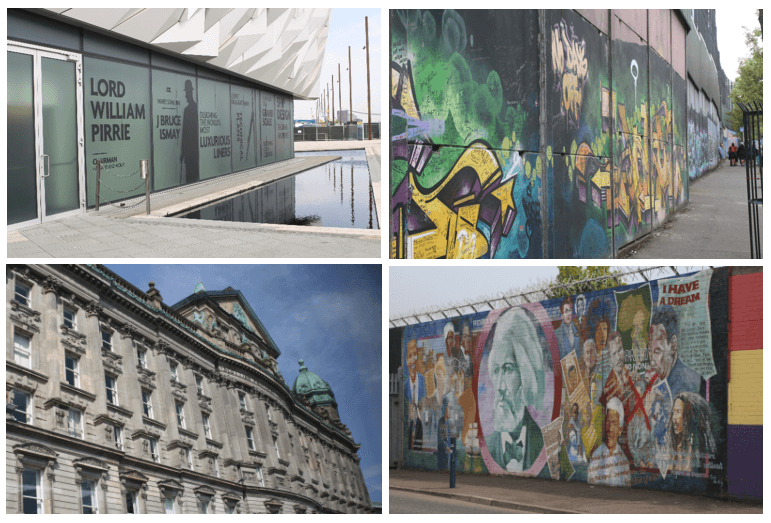 The Titanic Belfast Museum (top left) is housed in a very modern-looking building. This is in contrast to much older-looking, classic architecture (bottom left). The Peace Lines, built in the 60’s during “the Troubles” to separate warring unionist Protestant from nationalist Catholics, run through Belfast and other northern cities. Some contain murals (bottom right), while others contain graffiti (top right).

​Finally back in Dublin, we took one day to unwind and relax, taking in a few showings at the Cineworld cinema (Deadpool 2 and Avengers Infinity War, both of which were very good), with lunch at the delicious Tolteca next door. The two following days, we spent absorbing all we could of the city before heading back home. We arrived state-side on May 31, 16 days after leaving. We had a fantastic time and met some lovely people, but in the infamous words of Dorothy of Kansas, "There's no place like home!"