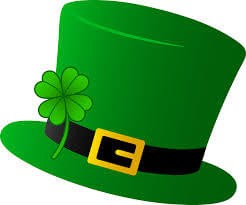 May your blessings outnumber
The shamrocks that grow,
And may trouble avoid you
Wherever you go.

​In a few days, the world will see green. Not green with envy, mind you, but green with shamrocks, leprechauns, cabbage, and of course, beer. St. Patrick's Day, the 17th day of March, the one day when everyone is Irish and celebrates Ireland's patron saint, Saint Patrick.

Although not Irish himself, Saint Patrick was a Christian missionary who spread the message of faith throughout Ireland. To commemorate his influence, the Catholic Church marked the anniversary of St. Patrick's death as a feast day.

The spread of the Irish tradition began during the 19th and 20th centuries when many Irish immigrants sought refuge in other parts of the world. One cause of the departure was the Great Potato Famine in 1845. Potato Blight spread across the countryside and wiped out the entire potato crop on which Ireland was so dependent. Thus began a mass exodus where nearly 2 million Irish fled their homeland to avoid starvation.

In 1845, Ireland experienced a devastating potato famine. Nearly 2 million Irish were forced to flee their homeland in search of better opportunities elsewhere. This mass exodus is a primary reason Irish influence is prominent throughout the world. The above flow map shows the top three emigration destinations. Data mapped with MapViewer (http://www.goldensoftware.com/products/mapviewer).
Today, St. Patrick's Day is celebrated in many countries across the globe. Census reports estimate there are more Irish-born individuals living outside of Ireland than there are Irish residing within Ireland. And even more people, roughly 80 million, claim Irish descent. It is no wonder there are so many St. Patrick's Day festivities and why we see so many famous landmarks sporting customary green hues. 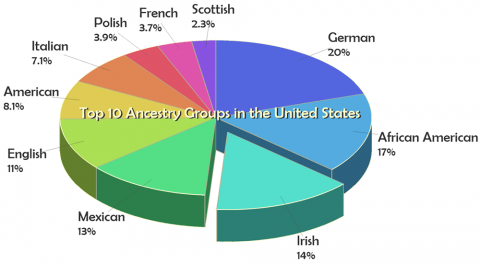 Irish ancestry is the 3rd largest ancestry group in the United States. Pie chart created in Grapher (http://www.goldensoftware.com/products/grapher).
Whether you are full blooded Irish, a temporary fan of St. Patrick, or someone who looks good in green, we wish you a happy, festive, and safe St. Patrick's Day celebration.