The Synergy Between Voxler and Strater: Creating a 3D Conceptual Site Model

One of our power users is accomplishing his goals using a combination of our applications. Joe Harrer, who is an independent Hydrogeologist with Anthropocene Solutions Inc., is using a synergy between Voxler and Strater to create a conceptual site model of a brine storage facility located in rural Alberta. For those of you that follow my blogs, I recently posted a blog article on Joe Harrer’s application of Voxler to create a 3D brine plume model of the same storage facility. The model was used for ground water monitoring and remediation efforts. Joe has taken the brine plume model a step further and has developed it into a complete conceptual site model of the facility. In Voxler, he has incorporated cross sections of the site’s lithological layers that were generated from borehole data in Strater, groundwater and ground level surfaces, groundwater monitoring wells, a site map, and drone imagery to create a complete conceptual site model.

What is a Conceptual Site Model?
So, you may ask, “What is a conceptual site model and what is it used for?” A conceptual site model, or CSM, is a model that is used to create a dynamic account of condensed site-specific information in which new and updated data can be easily added or subtracted when it becomes available. The CSM is composed of two components, a written portion that focuses on the history of the site, including the ecology, weather, details on surface water, geology, hydrogeology, and other environmental characteristics of the site, along with a visual model of the site. The CSM is used by the site management team to plan and schedule monitoring programs, build remediation action plans (such as the brine plume model), and to determine the effectiveness of these projects. Joe uses Strater and Voxler to generate the visual model portion of the CSM. 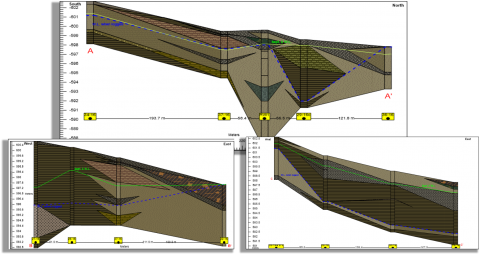 2D lithology cross sections created from borehole data in Strater. These are exported directly to the CSM in Voxler.

Integrating This All in Voxler
After creating the cross sections in Strater, they can be sent directly to and displayed in the 3D conceptual site model in Voxler. The addition of the cross sections quickly increases the amount of information the site management team has available, as they integrate the soil composition with the other aspects of the model including the monitoring wells, the groundwater level surface, and the site map. The CSM aides the site management team in making decisions about any current and future groundwater remediation efforts. Any new data can be quickly integrated into the CSM as it is obtained by updating the data files used in both Strater and Voxler. 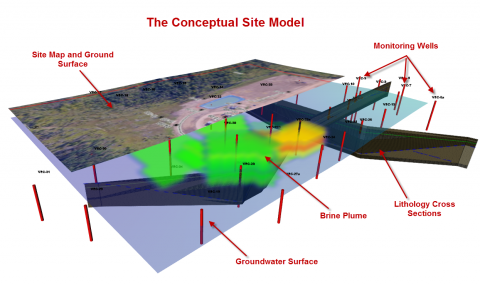 Joe comments about the CSM generated in Strater and Voxler: “The graphical visualization portion of the CSM is very important for large sites with intricate impact features.  The complexity of the graphical model should correspond to some degree with the complexity of the site. For this reason, we chose to build a 3-D Graphical CSM based on the Voxler plot of the VEC Plume limits and to that add cross-sections, a surface map with 3-D features, the equilibrated groundwater surface plane and down gradient edge cross-cuts.  The brilliant thing about this software is that you can add multiple features and rotate the model globally to show it from any angle or magnification.  It is also possible to turn any feature on or off by checking the appropriate item in the Network Manager.”  Combining the power of Strater and Voxler, you can create a model with more informative graphics than with either program alone. Combining cross sections with the other components in Voxler allows your site management team to make informed decisions, aiding in smarter allocation of funds and man-hours.