I read an interesting article recently in The Denver Post about how Tyson Foods, maker of various meat products, is expanding their market into China and India. Since consumers there are more accustomed to buying fresh (i.e. still warm) meat at the local market, Tyson is adding QR codes to their packing to tell consumers where the meat was processed and when it arrived in the store cooler, to give more trust in their product. Because Tyson requires refrigeration for their products, the article mentioned that Tyson is investigating locations in India that have ice cream shops. The cold-storage capacity that these sites offer, which is apparently difficult to find, would make the site a potential expansion site for Tyson.

I thought this was a very interesting idea, and thought that combining these locations with population information would present the clearest picture of good market locations. It turns out there are more ice cream shops in India than I had guessed there would be, but I have created such a map for the southern tip of the country. This contour map created in MapViewer 8 uses colors to show population and points to show ice cream shop locations. 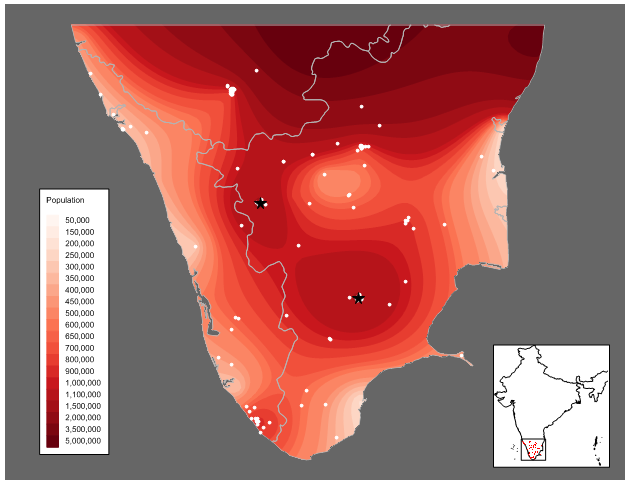 Contour map of population of southern India with locations of ice cream parlors shown in white. The two locations marked with black stars seem to be the best in this region for Tyson to expand to.

From visually examining the population contours and the point density of ice cream parlors, I determined two sites that would be the best locations in this region for Tyson to expand to. The stars represent these two locations.

The ability to overlay different map layers in ours and other GIS software packages allows companies like Tyson to make the best possible decision for their business.