As many of us earth and atmospheric scientists already know, seismic activity in Oklahoma has increased dramatically since 2009. This increase in earthquakes seems to be common knowledge. However, I was curious about some of the specific details and statistics surrounding this new phenomenon. According to the Oklahoma Geological Survey, or OGS, the northwest and central part of the state, which has historically had a low rate of seismic activity, has seen seismic activity rates jump by nearly 600% between the years 2009 – 2016 compared to the rate of activity from 2007 and earlier. I recently attended to the 22ndAnnual 3D Seismic Symposium in Denver, CO, where the director of the OGS, Dr. Jeremy Boak, gave a presentation about the seismology of induced, or human caused, earthquakes in Oklahoma and how this new trend was effecting the state. 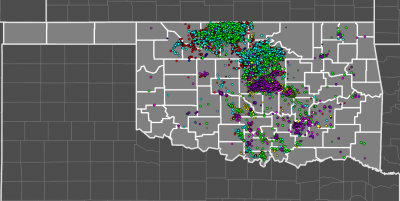 Earthquake events in Oklahoma from 2009 - present mapped in Surfer color-coded by year.

Over the past several years there has been discussion about the cause of the increase of the earthquake events, where most individuals seem to speculate that the events in Oklahoma have been caused by induced seismic activities associated with oil and gas exploration, namely fracking. According to Dr. Boak, many of the plays in central and northwest Oklahoma are deep carbonite plays that require horizontal drilling and use brine injections to increase productivity pressure. These two factors create a large amount of waste water when the oil solids are separated from the brine. The waste water has been typically disposed of deep in the strata via injection wells for permanent storage, mainly in the Arbuckle geological formation.  During the presentation, Dr. Boak sites a study done by the OGS where the OGS officially acknowledged the connection between “substantially increased disposal of waste water in the Arbuckle foundation and a ~600-fold increase in the number of earthquakes of magnitude > 3.0.”

Of most interest to me, personally, in Dr. Boak’s discussion was not the structure where the waste water was being disposed of or how the waste water disposal and the seismic events are related to oil and gas production, but simply the sheer numbers of earthquake events alone across the state since 2009. The number of seismic events is staggering. During the presentation, Dr. Boak showed a time series map of the earthquake events in a 2 dimensional, top-down orientated animation. As a GIS enthusiast, seeing the animation made me naturally think “how could I visualize the quake data from this time period in Oklahoma using Golden Software applications?”

Dr. Boak mentioned a location on one of the OGS servers that contains all of the most recent earthquake event data that is downloadable, which can be found at http://www.ou.edu/content/ogs/research/earthquakes/catalogs.html. The earthquake catalog data, which was going to be a good source for my mapping project, contains a number of different attributes including the latitude and longitude of each seismic event, the depth, the date, and the magnitude of each event. This would prove to be all of the information I needed to create the visualization.

To approach the mapping project, I downloaded the earthquake catalogs in CSV format from the OGS site. In Surfer, our contouring, gridding, and surface mapping software, I decided to create a post map layer for each of the year’s earthquake events and overlay them on US boundary files from the Golden Software website that contain the state and county boundaries. I then used the proportional sizing method in Surfer to make the earthquake events’ point size based on the magnitude of each event. This resulted in the image above, which seems a little cluttered due to the volume of events. I wanted to generate some comparative maps that show each year’s seismic events individually, so I created a new Surfer project that contains 8 different map frames, one for each year. I applied the same proportional symbology to each map frame and used the same base map layers to generate the figure below. As you can clearly see, the volume of events has been greatly increasing since 2009. 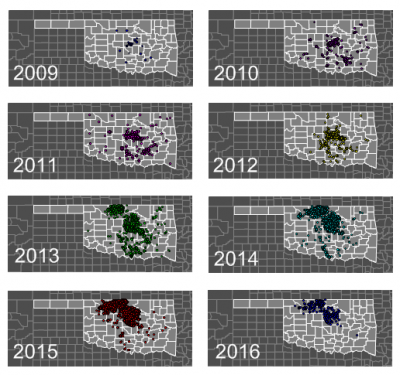 Earthquake events in Oklahoma from 2009 - present mapped in Surfer by year for comparison.

For the final portion of the mapping project, I wanted to incorporate the depth of these events by generating a 3D visualization of the earthquakes in Oklahoma. I used Voxler, our 3D modeling software, to visualize the data in true 3D space by creating a classed ScatterPlot where I based the size of each 3D sphere on the magnitude of the event. The earthquake events ranged from the surface to ~15 km deep. In the image below, you can see the most previous 8 years’ worth of seismic event data together, creating a very clustered and stunning look at these events. 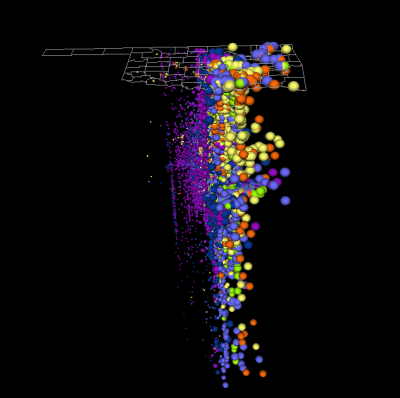 Take a look at these easy to use mapping and visualization applications for your next mapping project!