GOLDEN, Colorado, 24 February 2021 – The Juneau Icefield Research Program (JIRP) calculates that thinning of Alaska’s Taku Glacier has increased from an average rate of a half meter to two meters per year over the past two decades. Annual mapping by JIRP reveals the glacier’s thickness has increased and decreased from one year to the next, likely due to snow accumulation variability, but the overall current trend shows an annual net loss of ice.

JIRP monitors the complex kinematics and mass balance of the Juneau Icefield – that is, they study annual changes to ice velocity, snow accumulation, and surface melting – to estimate if the glacier is advancing or retreating over time. One way they accomplish this task is by mapping yearly GPS field points in the Grapher and Surfer modeling packages from Golden Software, a developer of affordable 2D and 3D scientific software based in Golden, Colo.

Accurate assessment of the Taku melt rate is vital to the study of climate change because, at more than 800 square kilometers, the glacier is the largest in the massive Juneau Icefield. Straddling the Alaska-Canada border, the receding icefield plays multiple important roles in local ecosystems. For the residents of British Columbia, it is a reliable supply of freshwater, but for the Gulf of Alaska, increasing glacier meltwater can have potentially negative impacts the marine ecosystem and valuable fisheries.

JIRP research dates to 1946, but the introduction of GPS contributed significantly to annual summer fieldwork beginning in 1993. Volunteers capture more than 1,000 GPS measurements at designated transect locations on the icefield each year to record glacial velocity and surface elevation changes. These values reveal whether the glacier is growing or shrinking due to changes in precipitation or melt rates or from changing rate of movement.

Together, these ice elevations, velocities, and volume change calculations give researchers a better understanding of external forces acting upon the Juneau Icefield and what to expect in the future. Read the full case study at https://www.goldensoftware.com/success-stories/tracking-glacier-thickness-changes-with-grapher-and-surfer. 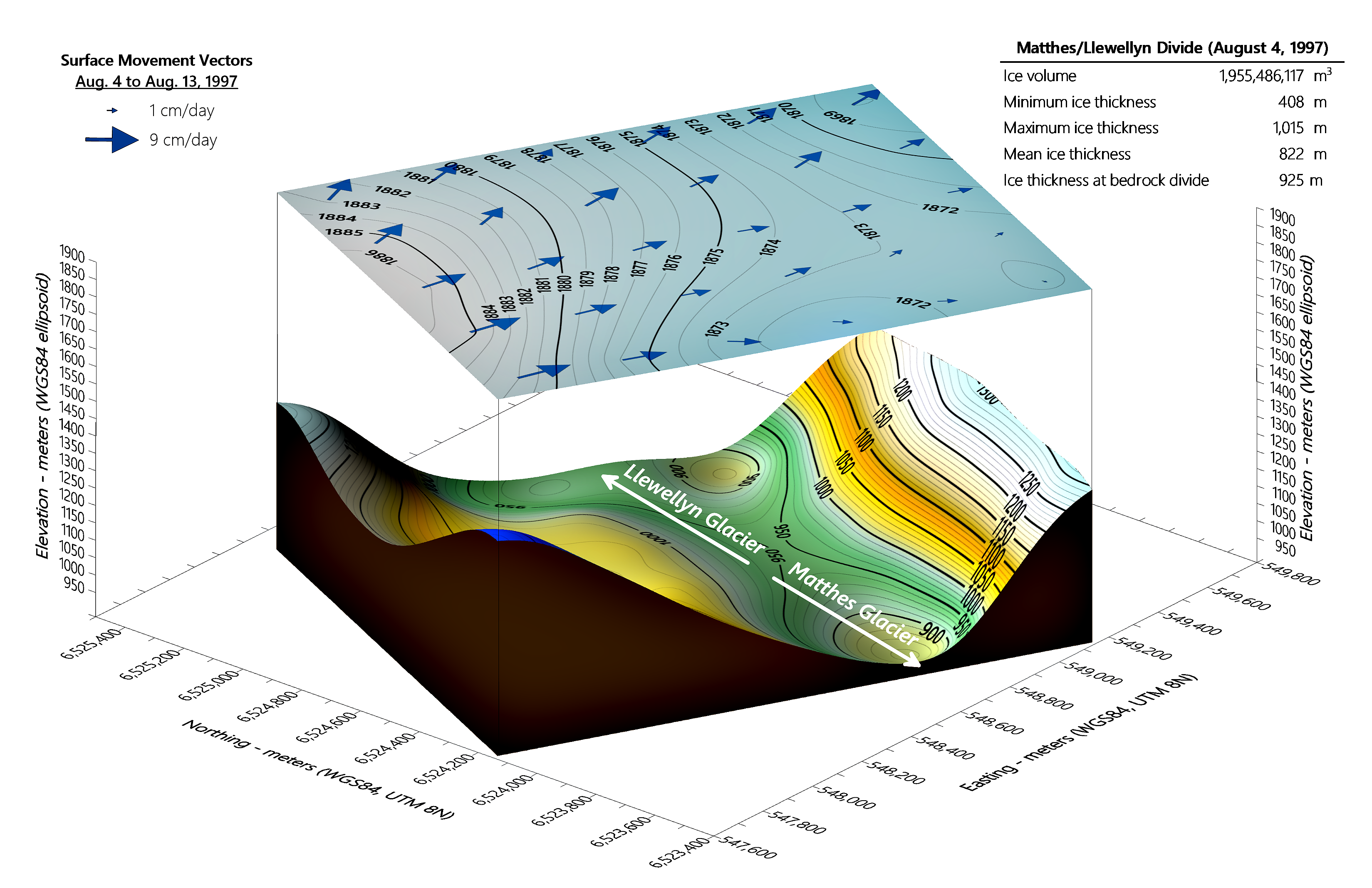 Created in Surfer, the upper surface shows the glacial topography and movement vectors.

Lower surface shows the thickness of the subglacial valley at the divide. (Credit: JIRP)

Golden Software’s Grapher and Surfer packages are used by more than 100,000 scientists and engineers worldwide, many involved in oil & gas exploration, environmental consulting, mining, engineering, and geospatial projects. The software has been relied upon for more than 35 years by users in numerous disciplines to easily visualize and interpret complex data sets.