GOLDEN, Colorado, 19 November 2019 – A historical archaeologist made a surprising discovery about daily life in an 1800s gold mining town by mapping artifacts in the Surfer scientific modeling package from Golden Software. Artifact distribution maps indicate Highland City, Montana, may have been a well-integrated town for its time.

“Overseas Chinese immigrants worked in the mines of the American West just as non-Chinese miners did, but often they lived separately in what is usually called a Chinatown,” said Dr. Megan Rhodes Victor. “But artifacts in Highland City show them living right next to each other in one residential area.”

Such integration, as suggested by the artifacts, was uncommon in late 1880s mining towns, explained Victor, who made the discovery while working on her PhD at William & Mary. Her project focused on mapping the physical layout of the once thriving Montana town near Butte where thousands of miners lived in 300 cabins and frequented 10 saloons, a hardware store and other businesses. Remarkably, no maps of Highland City exist today.

Victor led a team of students and volunteers, some of whom joined the research through the U.S. Forest Service Passport in Time Project (PiT). They dug 300 test pits to find artifacts that could help pinpoint building locations and identify their functions. Artifacts such as pieces of wine bottles, jars, nails and horseshoes found in each hole were documented and entered into Surfer to generate distribution maps and predictive models.

Relied upon by over 100,000 clients worldwide, Surfer is a gridding, contouring and 3D surface mapping application used widely in environmental consulting, mining, oil & gas exploration and extraction, engineering, geospatial applications, and applied science. Surfer is known for its fast and powerful contouring algorithms that regularly outperform more expensive packages, allowing scientists to model data sets, apply an array of advanced analytics tools, and graphically communicate the results in ways anyone can understand.

“I tried mapping artifacts in a GIS package, but it just showed a bunch of dots,” Victor said. “Surfer allowed me to create real topographic maps to express artifacts.”

Evidence of an anomalous situation in the ghost town came from an artifact density map created in Surfer. Pieces of brown-glazed stoneware known to come only from China and almost always associated with residences of Chinese immigrants were found in two unexpected locations. The first was in the middle of a non-Chinese residential area, and the second was amidst downtown businesses.

The presence of Chinese individuals in Highland City’s commercial block is easier to explain because immigrants – even in the face of prejudice – often ran restaurants and laundries. The evidence of Chinese living in multiple cabins in the residential area, however, defies cultural and societal norms of late 1800 mining towns.

“It’s exciting to me that the Surfer data show no evidence of a Chinatown in Highland City. Chinese and non-Chinese are living side by side,” said Victor. “Hopefully, future research will help explain why this seems to have occurred.”

At least a third of Highland City – a federally protected Historic Site – remains to be found, mapped and interpreted. Victor believes future expeditions to Montana will shed additional light on what could be one of the most integrated mining towns of the late 19th century.

For more information on the Highland City project, please read this case study on the Golden Software website. 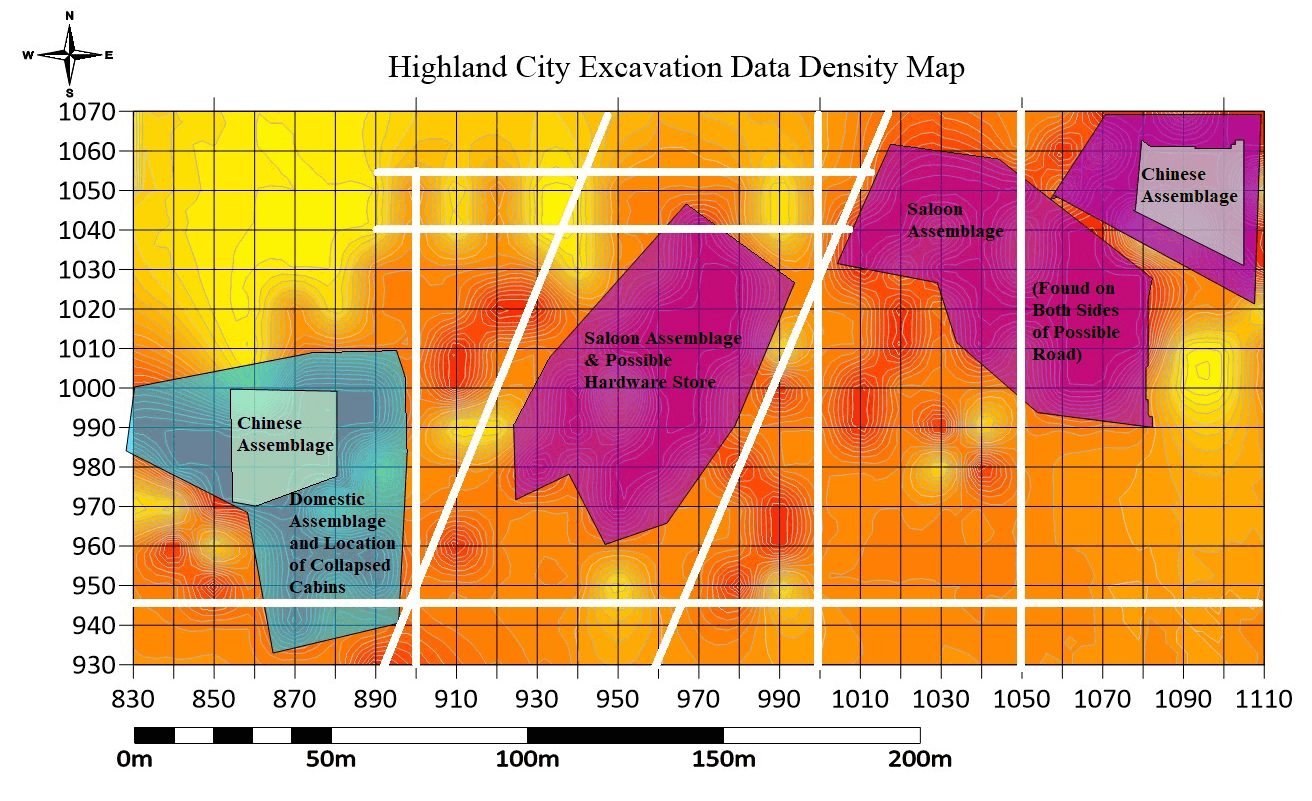 Graphics Caption: Generated in Surfer, this classed post map shows the results of systematic archaeological excavations at the site; the data show evidence of activity areas, including probable roads. This became even clearer when Victor combined it with an artifact distribution map, which she also produced in Surfer.