The Canadian Province of Quebec uses the analytics and gridding functions in Surfer to dramatically enhance the quality of weather data in its forest fire information system. Without Surfer, the automated interpolation and mapping performed on an hourly basis would have to be conducted in a full-feature GIS package at considerably greater expense.

Referred to as SOPFEU for its French acronym, the Quebec Forest Fire Protection Society is tasked with generating more than 100 weather maps and related charts every day. Available online in digital formats, these documents are created primarily for use by provincial firefighting commanders to prepare for forest fires when conditions are dangerous and to battle the blazes once they have begun.

Before deploying Surfer, the hourly weather maps produced by SOPFEU reflected meteorological conditions across Quebec based on point-source reports of temperature, wind speed/direction, humidity and precipitation without interpolation. If, for example, one of the province’s 194 weather stations reported a temperature of 24° C, the entire area around that point, defined by an arbitrary polygon, was assigned the same temperature.

“The way we were displaying weather information had little scientific value,” said Lundqvist, noting there is an average distance of 80 kilometers between stations, and conditions vary considerably.

Working with Surfer analytics tools, SOPFEU’s weather office staff wrote algorithms to interpolate weather conditions between stations on 1.2-kilometer grids, much smaller than the massive polygons once used. The interpolations take into account weather reports at each station and those around it and then factor in meteorological influencers, such as elevation changes and distance from water bodies.

“They let fire fighters know when a front will pass or the winds will shift,” said Lundqvist.

With the automated maps created each hour, SOPFEU is in the process of creating maps in Surfer that represent even more complex conditions and situations. Referred to as Forest Fire Weather Indices, these vector maps alert commanders to areas that are more prone to potential fires. The most popular of these is a Head Fire Intensity map which combines temperature, relative humidity, wind speed and precipitation forecasts and overlays them on fuel type layers to pinpoint where the difficulty of controlling a fire would be greatest.

“Fuel type usually refers to the species of tree in the area,” said Lundqvist. “Using Surfer, this index will soon be generated at the same 1.2-km grid as the other products.

SOPFEU could create the automated maps and related products in a GIS package, but the cost of purchasing the license and hiring a trained GIS specialist would far exceed the expense of using Surfer, according to Lundqvist. 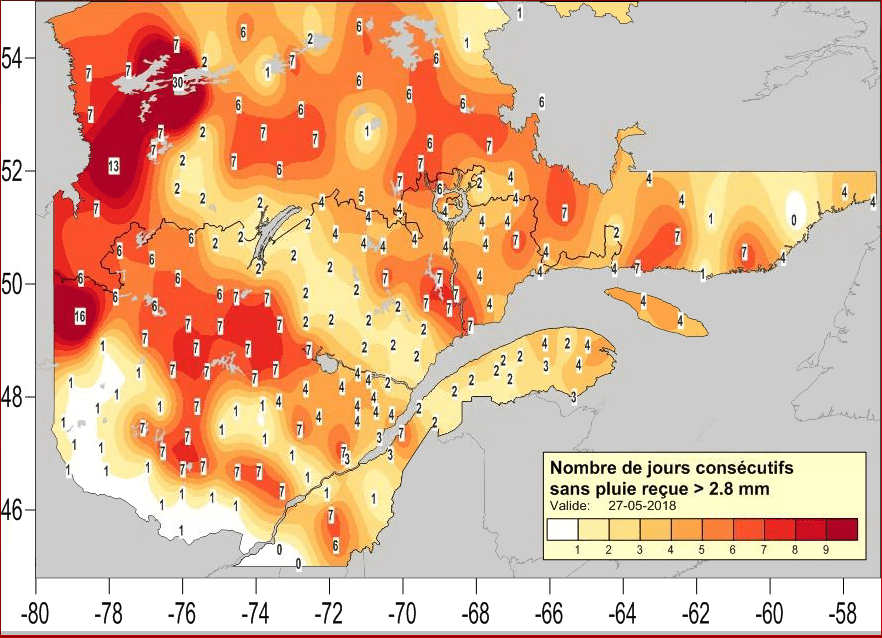 Number of consecutive days since the last rainfall of at least 2.8 millimetres. 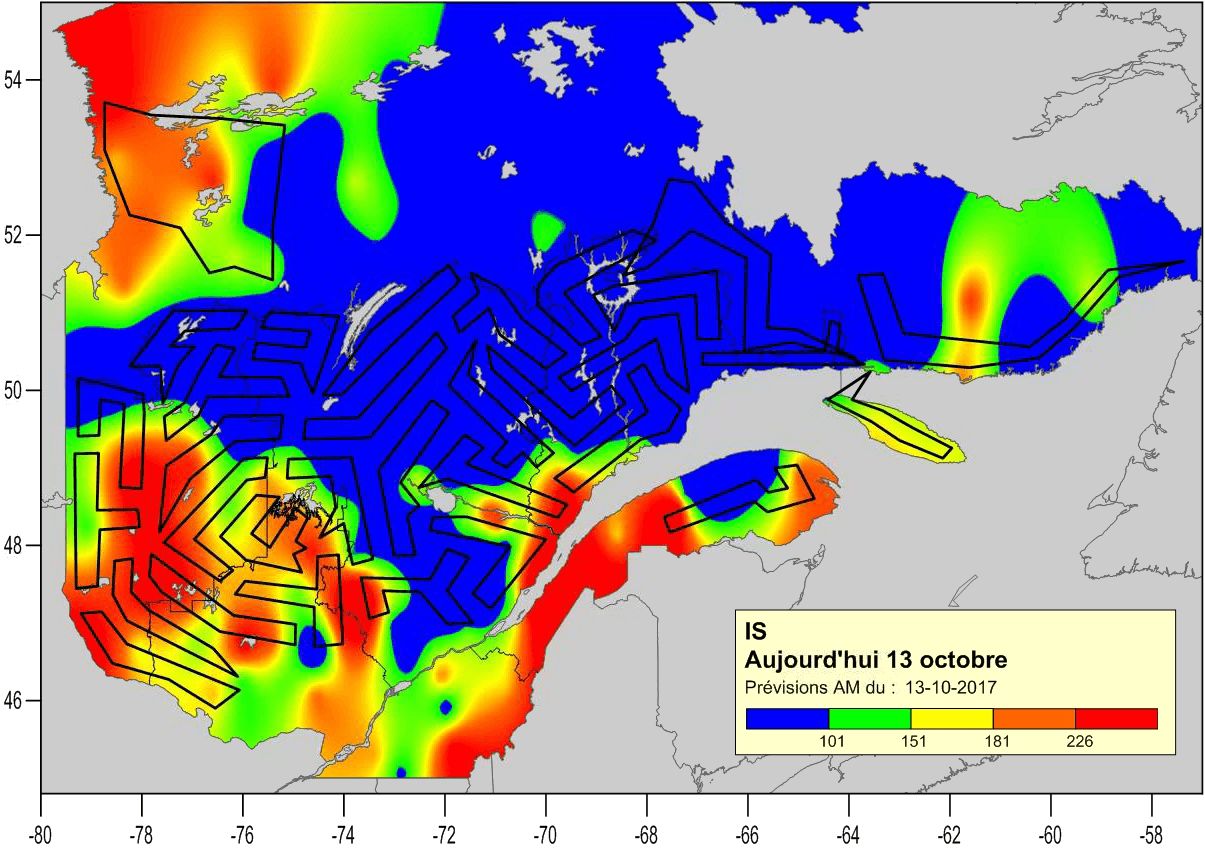 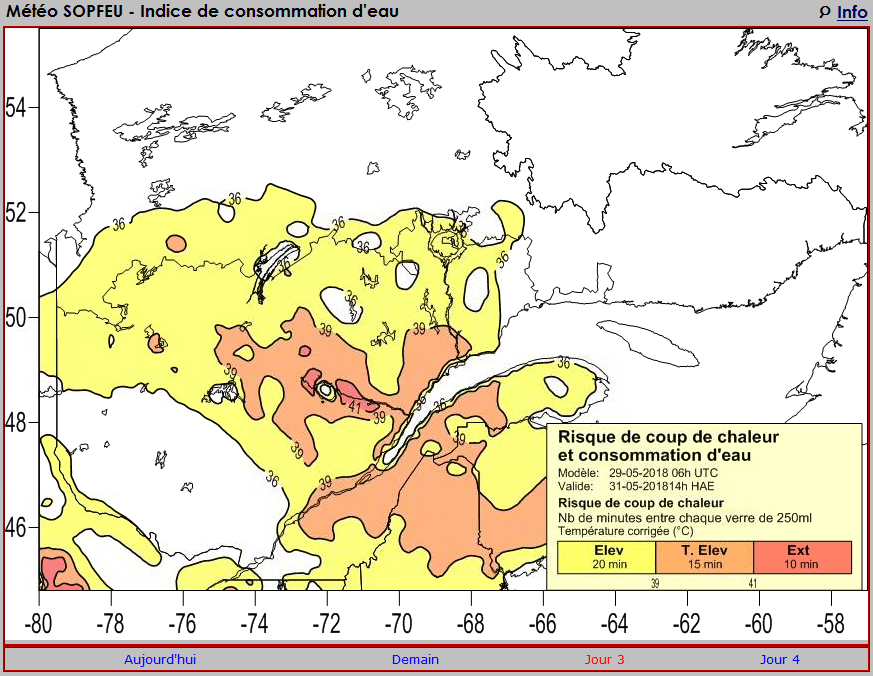 Risk of Heatstroke and Hydration Recommendation 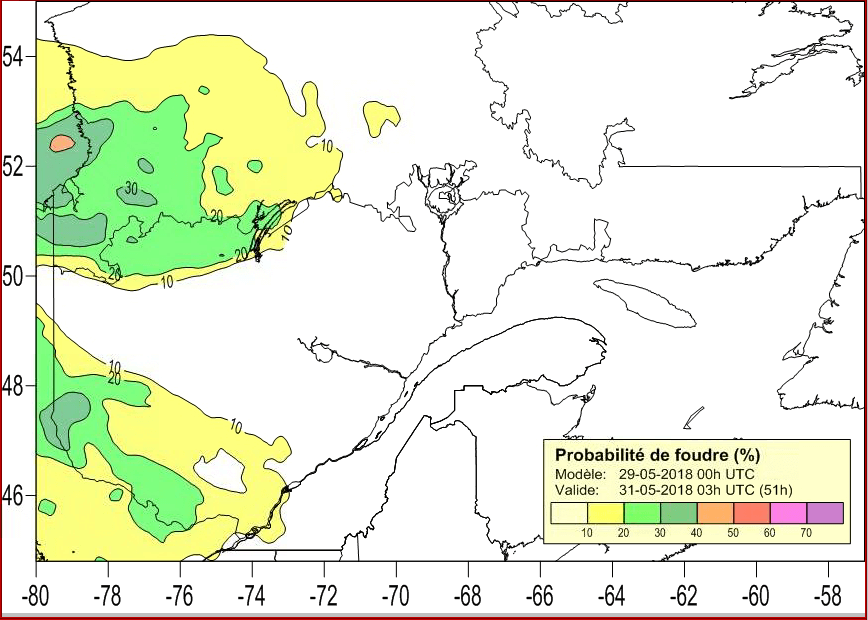 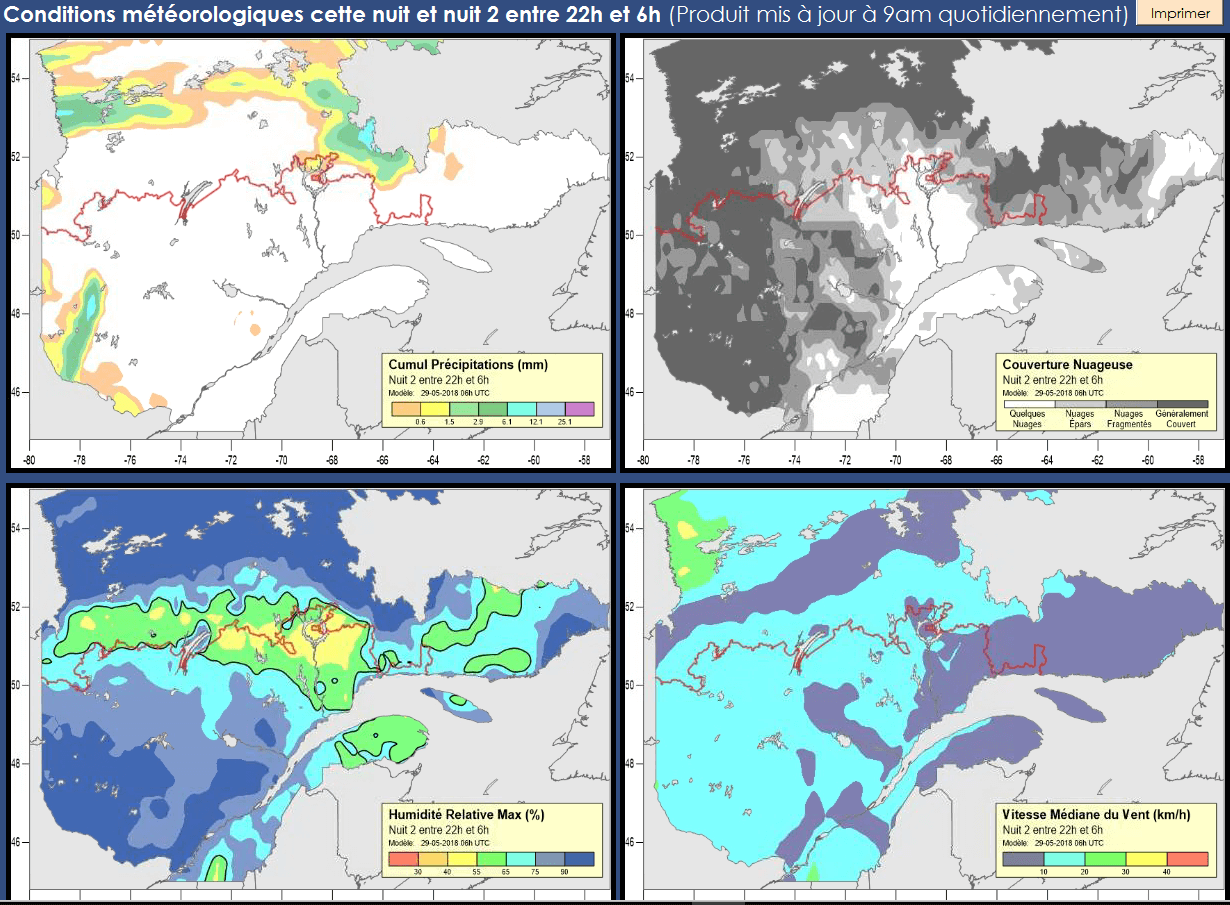 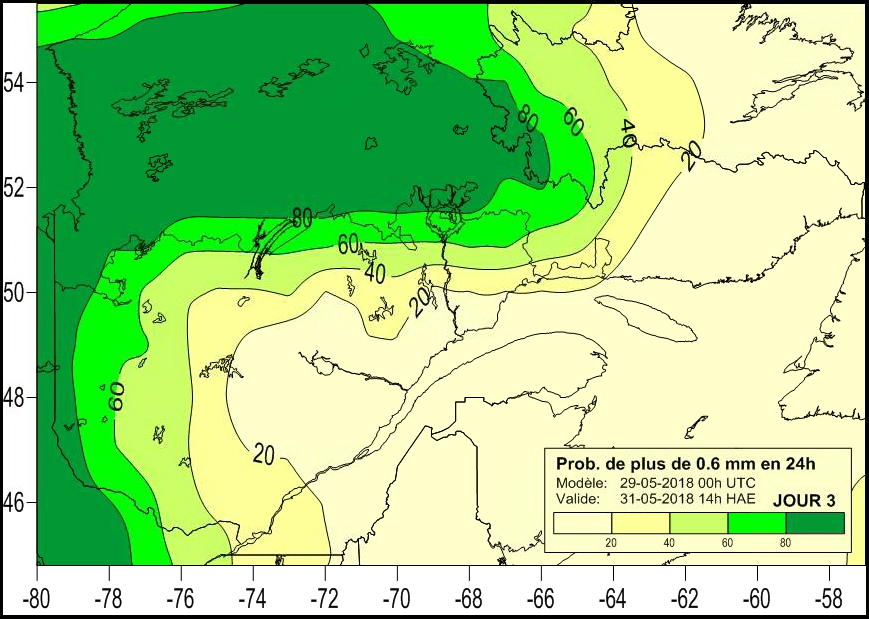 Probability of over 0.6 millimetres of rain over 24 hours. 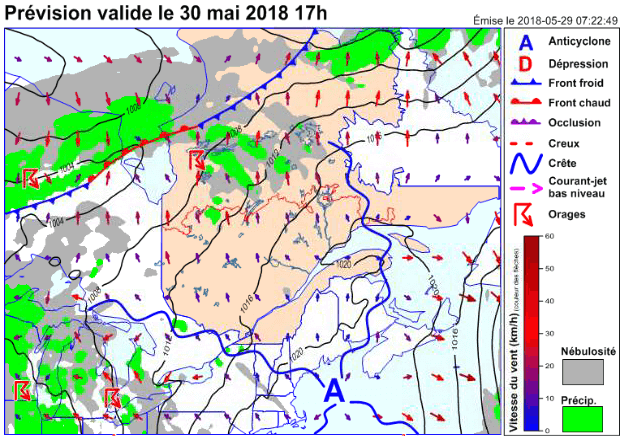 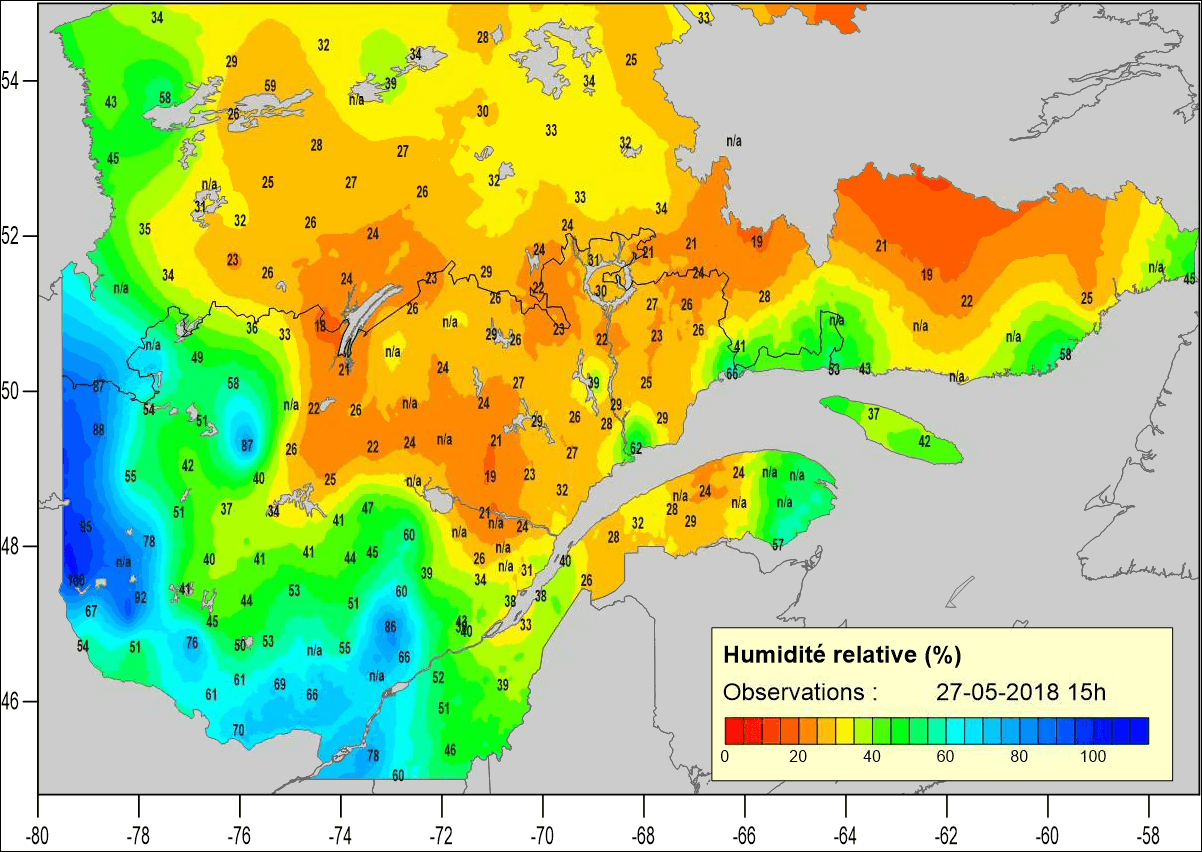 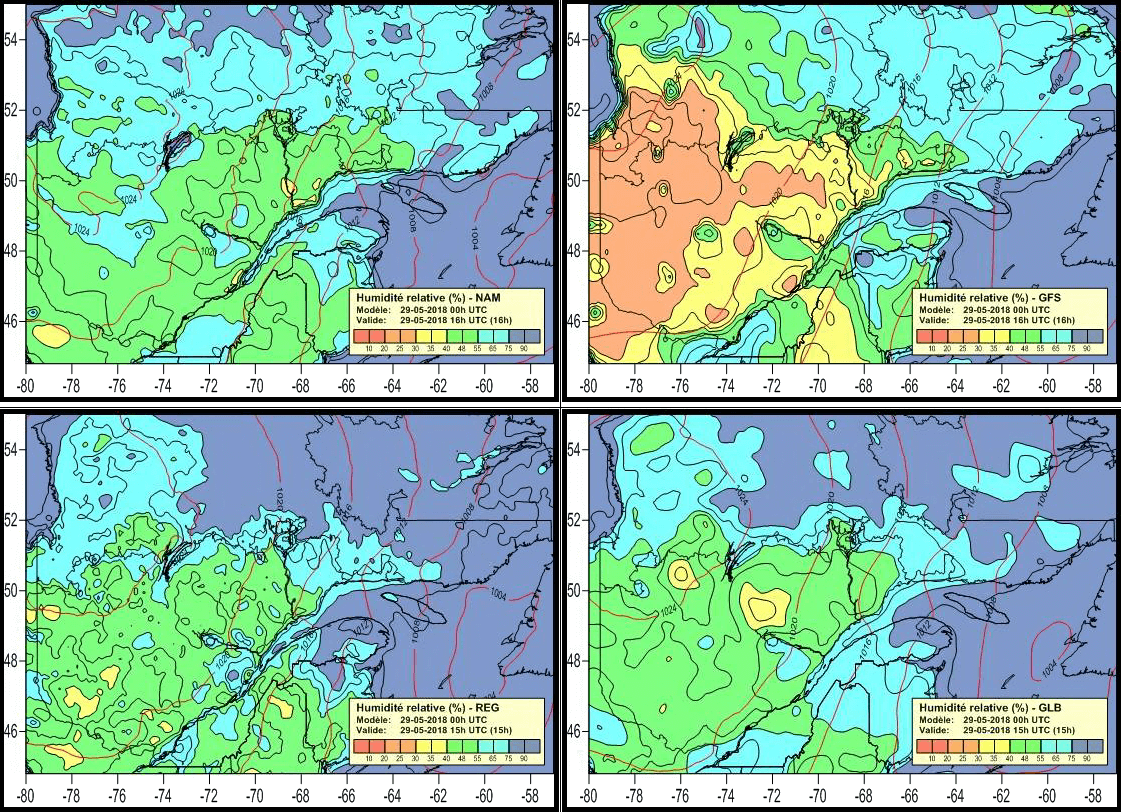 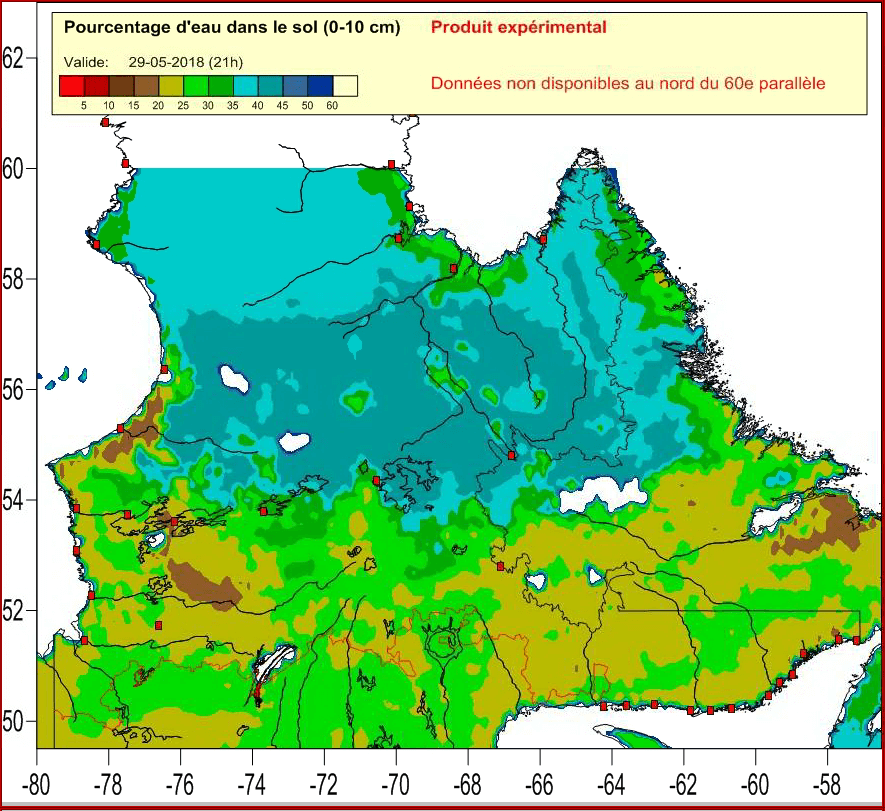 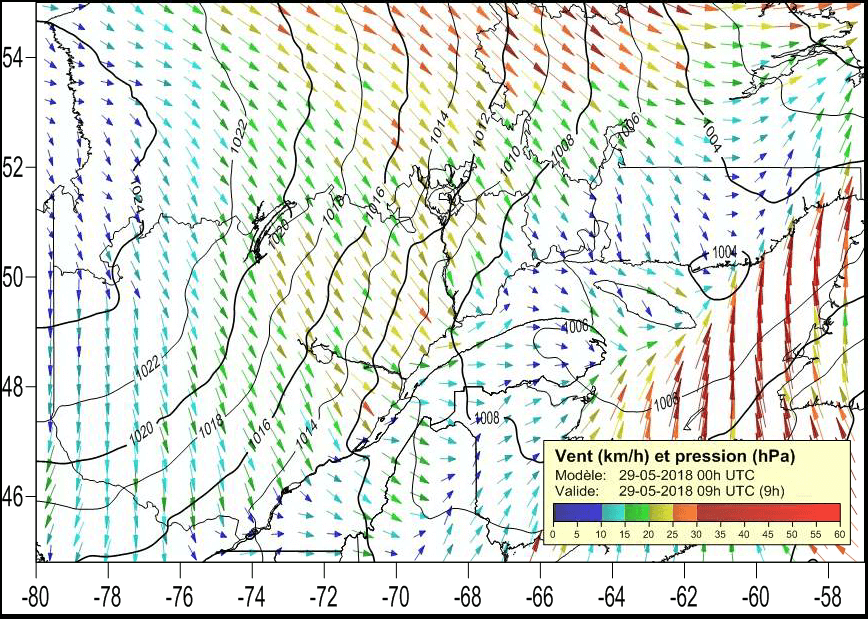