The Blue Mountains sprawl over a massive area of thick bushland (approx. 440 sq miles) that the New South Wales government has done a thorough job of collecting LiDAR data on as part of its state-wide mapping initiative. Much of that data is available for public access through government websites. However, due to the extent of the range, this data is provided in 2km x 2km grid “tiles” with thousands of points in each tile. To further complicate things these tiles can span several different coordinate zones.

This is where Surfer comes in handy. Using Surfer’s coordinate system capabilities as well as the Grid Mosaic function Peter is able to convert all of these tiles into the same system and then stitch dozens of these tiles together into one neat workable grid. Once these tiles have been turned into a manageable LiDAR dataset he can take these mosaicked and resampled grids into his book. Using specific grids for entire chapters that tell the story of various pockets of interest throughout the Blue Mountains range.

Once each map has its own grid Peter can utilize Surfer’s “wonderful visualization” tools. He creates stunning topography maps by overlaying layers downloaded from public access databases onto these grids. Surfer then enables him take the topography to the next level by using custom color map settings to generate a color scale that best distinguishes high elevations points in a plateau area. Further assisting Peter to paint a picture of the landscape’s history are the custom symbol options in Surfer he can use for visualizing stream channels.

Photograph showing the typical landscape at the head of the Katoomba Valleys displayed in the topography map above.

The symbols along the streams are created using a classed post layer and identify zones of steepening, “knick zones” within the valley. If a river predates the landform, these zones of steepening, also known as knickpoints progressively work their way upstream after uplift occurs.

Within the maps Peter generates he is able to digitize the stream bed and determine where these steep knickpoints are occurring. Once these knickpoints are identified, Peter can take a closer look at the surrounding landscape to reveal evidence of the erosion processes and geological uplift that form the signature plateaus dominating the Blue Mountains Range. 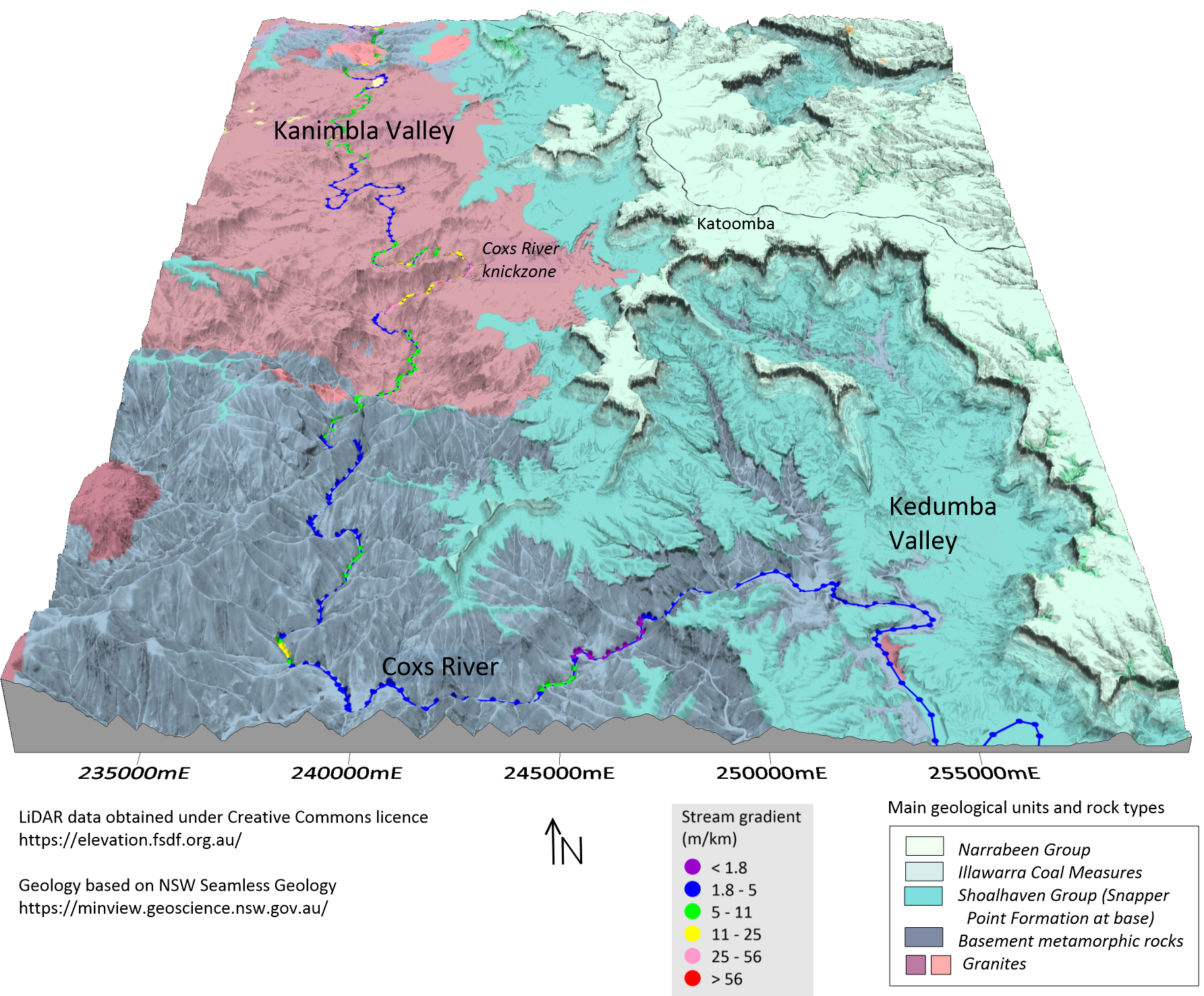 This map is of the same area as the one above (Katoomba Valleys), displayed in a 3D view. The geological map has also been overlaid onto the 3D surface.

Photograph is taken from the south end of the 3D Geology map and looks into the area the map represents.

Another powerful geologic force shaping the landscape of the Blue Mountains is landslides. Peter finds that bringing LiDAR data into Surfer is an incredibly effective method to identify and visualize the sites of ancient landslides. Since the valleys of the Blue Mountains are so densely covered in vegetation it isn’t always easy to find the clues that would tip a geologist off that the landscape was formed by landslides. However, with LiDAR data you can see through the dense eucalyptus forest and create an image of the true ground surface.

Once that LiDAR data is processed in Surfer, these ancient landslide landforms are finally revealed as an impressive 3D model. Providing evidence that together with knickzone erosion, landslides are a major erosional element in the formation of the huge cliff-rimmed valleys. While landslides were not a frequent occurrence over the millennia that this landscape has formed, it is clear landslides have made an important contribution to the erosional processes. 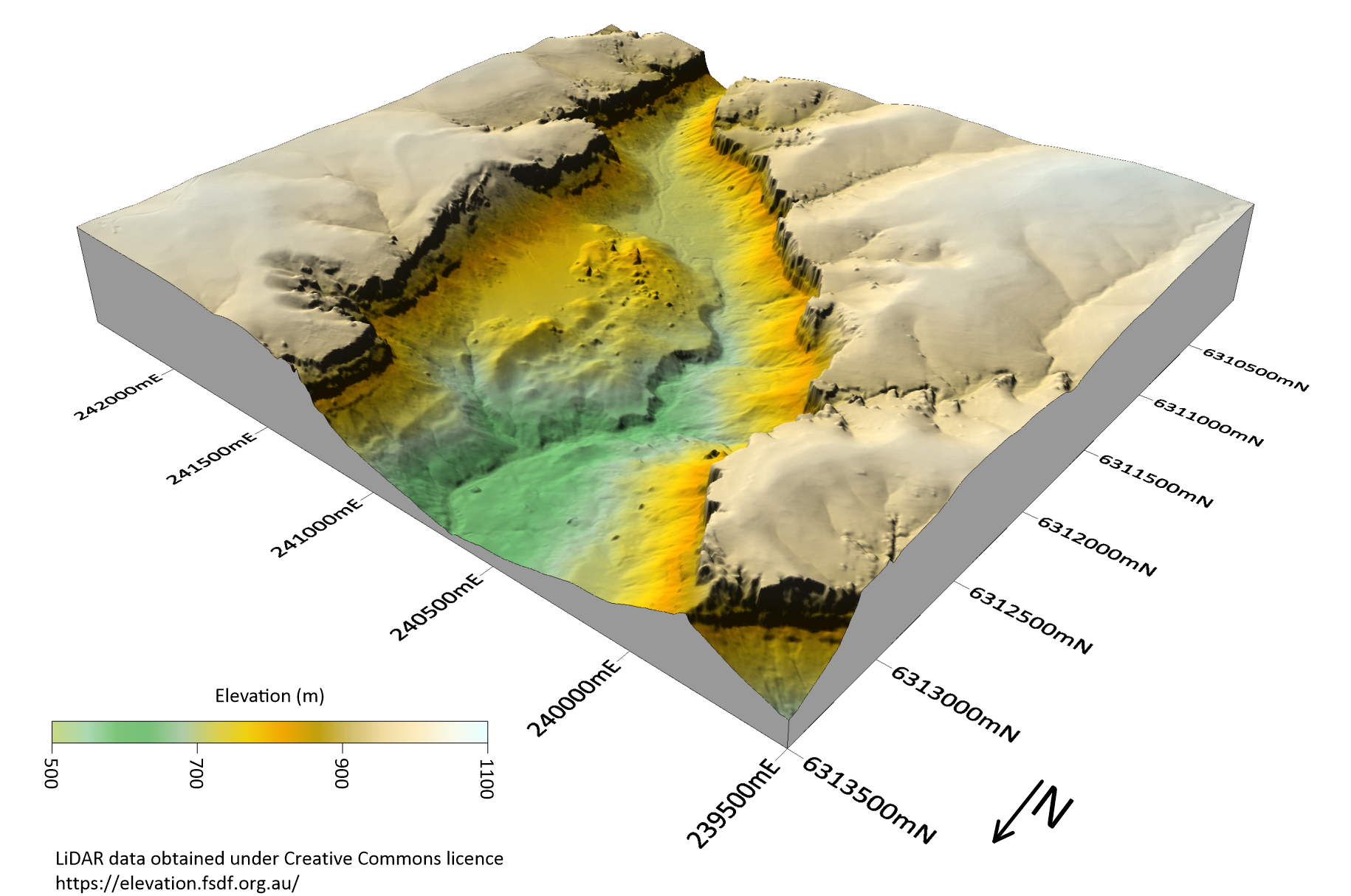 3D visualization of LiDAR data revealing a relict landslide due to sandstone cliff collapse. The subtle boomerang shaped feature on the plateau behind the landslide is a small sand dune dating from the cold, barren times of the last ice age.

Photograph of the corresponding ancient landslide site displayed in the map above. Notice how the dense vegetation blocks the view to the true ground surface.

Peter feels that due to the clarity Surfer provides by creating such crisp visualizations he can write with confidence. Diving into great detail on how geologic features such as knickpoints and relict landslides are key factors in revealing the history of this landscape thousands of outdoor enthusiasts enjoy every year. From mineral exploration, to now creating visually striking maps for a broader audience, Surfer has always been a tool Peter can rely on to tell his story.

Interested in creating your own 3D visualizations from public domain LiDAR data? Download the free trial of Surfer today!

As of June 2022 Peter's book “The Blue Mountains: exploring landscapes shaped by the underlying rocks, uplift and erosion ” has been released! The guide book delves into much greater detail on the geology, ecology, and history of this incredible natural area. We would like to thank Peter for taking the time to speak with us and also mention his co-author Ian Brown. Ian is an Ecologist and Photographer whose work is featured in the guidebook as well. If you would like to purchase the guide book and view more of Ian's photograph follow the link below!

The Blue Mountains: exploring landscapes shaped by the underlying rocks, uplift and erosion