Mustafa Saribudak, founder of Environmental Geophysics Associates (EGA), is a prominent figure in the geophysical realm. In 1989, Dr. Saribudak joined the University of Houston Geoscience Department as a visiting geoscientist from Istanbul Technical University, Turkey. Following his time at the university, Dr. Saribudak dove into the industry and in 1994, ventured out on his own with EGA, a global geophysical and geological consulting firm. Dr. Saribudak is an active member of the Austin Geological Society, and is a well-known individual in the Austin geophysical community.

Dr. Saribudak's company, EGA, offers a broad range of geophysical surveys that aid in geotechnical and environmental problems. Geophysical surveys are a cost effective, nonintrusive technique that images subsurface areas. EGA performs surveys to locate buried utilities, underground storage tanks, and other infrastructure, but their specialty is locating and delineating caves, voids, fractures, and sinkholes over the Edwards Aquifer.

The Edwards Aquifer is located in the central region of Texas, USA. This underground layer of water-bearing rock is between 300 and 700 feet thick and covers a total overlying surface area of approximately 3,600 square miles. The structural framework of the Edwards Aquifer is controlled by the Balcones Fault Zone. This aquifer serves a wide range of agricultural, industrial, domestic, and recreational needs for the surrounding areas.

The Barton Springs Pool is one such recreational entity benefitting from the Edwards Aquifer. Measuring three acres in size, the pool is fed from underground springs and is a popular destination for many Austin residents and visitors. The pool's water source was originally believed to stem from one of the normal faults within the Balcones Fault Zone, the Barton Springs fault; however, EGA proved this was not correct and actually located a new fault.

Resistivity and induced polarization surveys image the subsurface by measuring voltage differences between electrodes. Resistivity values are highly affected by the presence of water or moister, the amount of and distribution of pore space in the material, and temperature. Self-potential surveys help locate caves and sinkholes by measuring natural electrical currents which are detected by using a pair of non-polarizing copper sulfate electrodes and a sensitive measuring device. Seismic refraction works best in layered geology and identifies lateral and vertical seismic velocity and layer thickness changes. This method works only with layers that increase in velocity with depth. Ground penetrating radar employs radio waves to map near-surface geology and man-made features. Conductivity surveys correspond to geological variations, groundwater contaminants, and any subsurface feature associated with changes in ground conductivity. 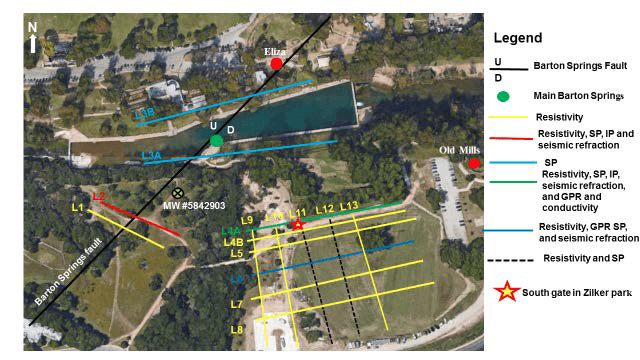 By gathering all of this data, EGA was able to create a full picture of the subsurface elements of the Barton Springs Pool. The results were analyzed using a variety of software tools including Advanced Geoscience, Inc.'s 2D EarthImager and 3D EarthImager, Golden Software LLC's 2D and 3D contouring, gridding, and surface mapping software, Surfer, Intelligent Resources, Inc.'s Rayfract, and GSSI's Radan. 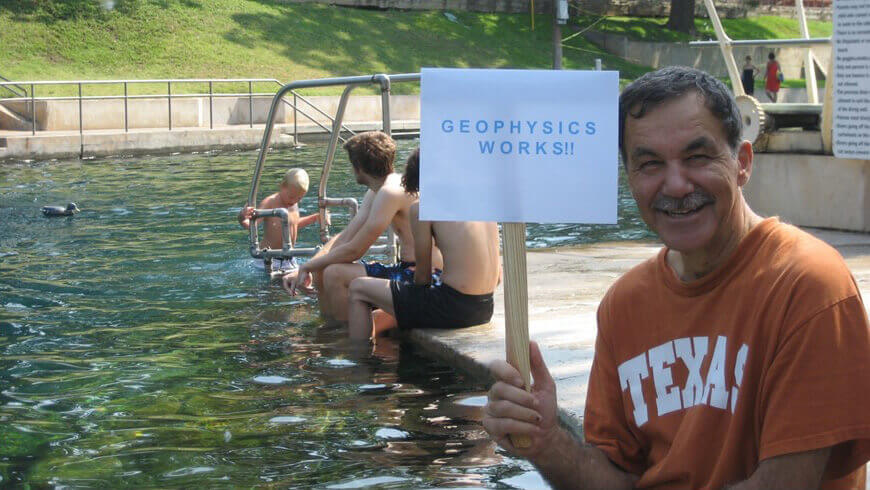 Dr. Mustafa Saribudak soaking up the sun at the Barton Springs Pool.