Assess Groundwater Vulnerability with the DRASTIC Method in Surfer

Groundwater is a vital resource. It is one of the largest global sources of freshwater, and in Canada it is estimated that nearly 30% of the population relies on groundwater for their water supply (CCA 2009).

As groundwater is such a precious Canadian resource, the need to determine the vulnerability of a municipality’s groundwater supply to pollution is vital to sustaining its environmental health. That is why the Quebec Ministère de l'Environnement (Ministry of the Environment) recently founded an initiative to evaluate the risk of Quebec’s groundwater sources.

As part of this initiative the Quebec government created a fund to hire environmental consulting and hydrogeology firms to conduct groundwater vulnerability analysis using the DRASTIC index methodology (Aller & Al., 1987). One of the firms hired for this province wide undertaking was Richelieu Hydrogeologie Inc and Yves Leblanc, hydrogeologist and owner of the company.

In order to perform the analysis his firm was hired for Leblanc and his team require a mapping software that can both visualize all of the variables used to assess the vulnerability of groundwater resources and perform the necessary geostatistical functions. Richelieu Hydrogeologie’s software of choice for these workflows? Golden Software’s Surfer!

A common method that hydrologists use to assess the vulnerability of groundwater resources to pollution is the DRASTIC method. The DRASTIC method quantifies several hydrogeologic parameters to determine the potential of pollution to transport through soil and seep into an aquifer.

Surfer is an incredible tool for DRASTIC modeling. Surfer can both visualize all of these variables in the same map frame, and apply mathematical functions to the corresponding variable layers to generate the final DRASTIC vulnerability figure.

Often the starting point of a DRASTIC modeling project is to determine the depth from the ground surface to the water table. By gridding piezometer well readings Leblanc can easily create potentiometric contours that represent the depth to the water table throughout the municipality. To supplement the contours, he can add groundwater flow arrows. If the municipality representatives don’t have a strong hydrogeology background he can even download and add street map imagery the clients can recognize. Helping them understand the local water table from their point of view. 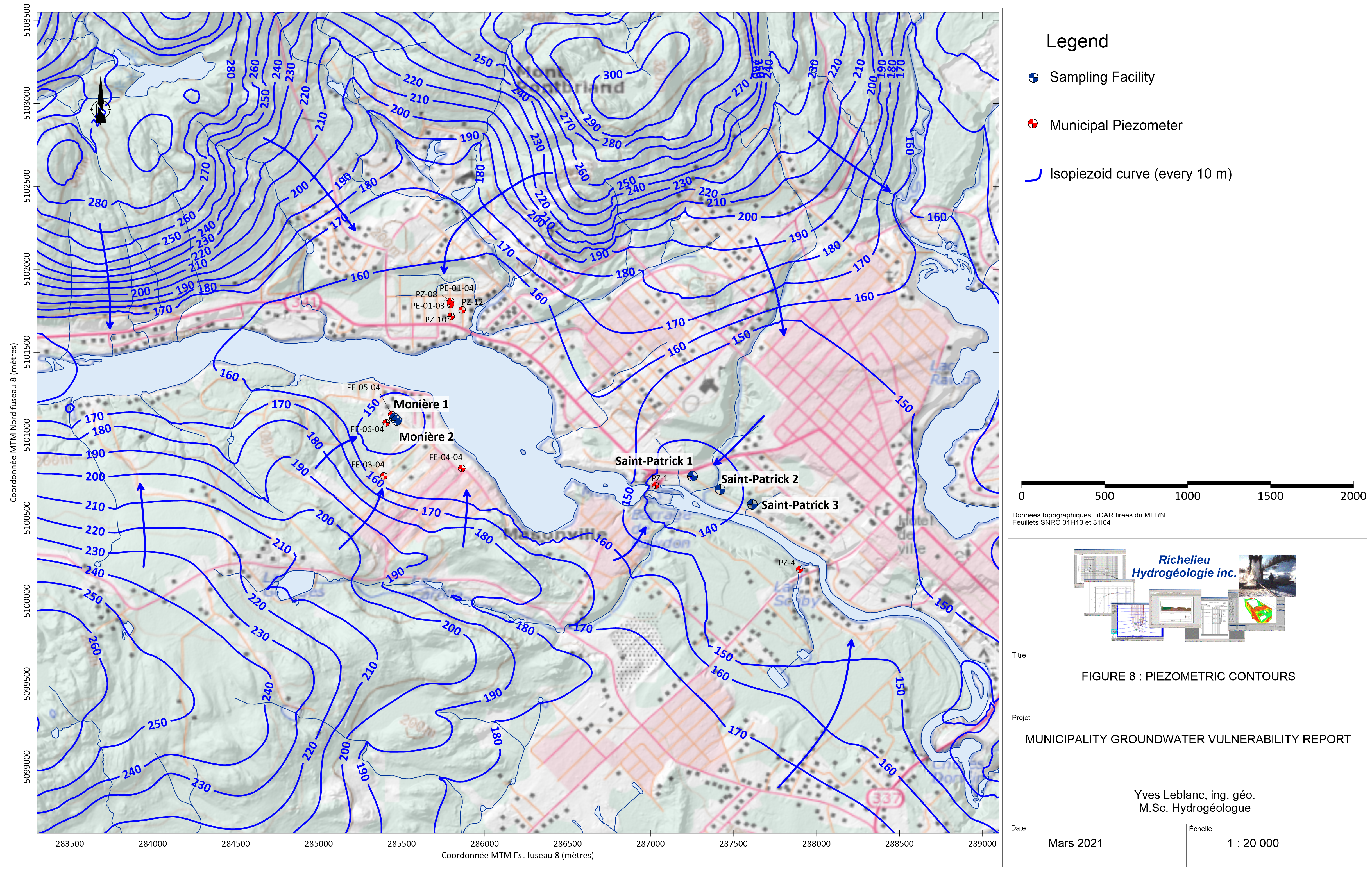 The geology of an area also plays a key role in determining groundwater vulnerability. Pollution can more easily transport through certain sediment layers. Accordingly, it is important to map and quantify the geologic zones to identify areas vulnerable to contamination.

With Surfer Leblanc can add a vector layer representing the surficial geology of the municipality and color the polygons by their sediment classification using the attribute table and symbology features. To represent the sites topography, he also overlays elevations contours using a grid generated from a 2m LiDAR file. As a final touch Leblanc finds it effective to overlays a TIF as a hillshade raster. Creating a final map that seems as if it is popping off the page. 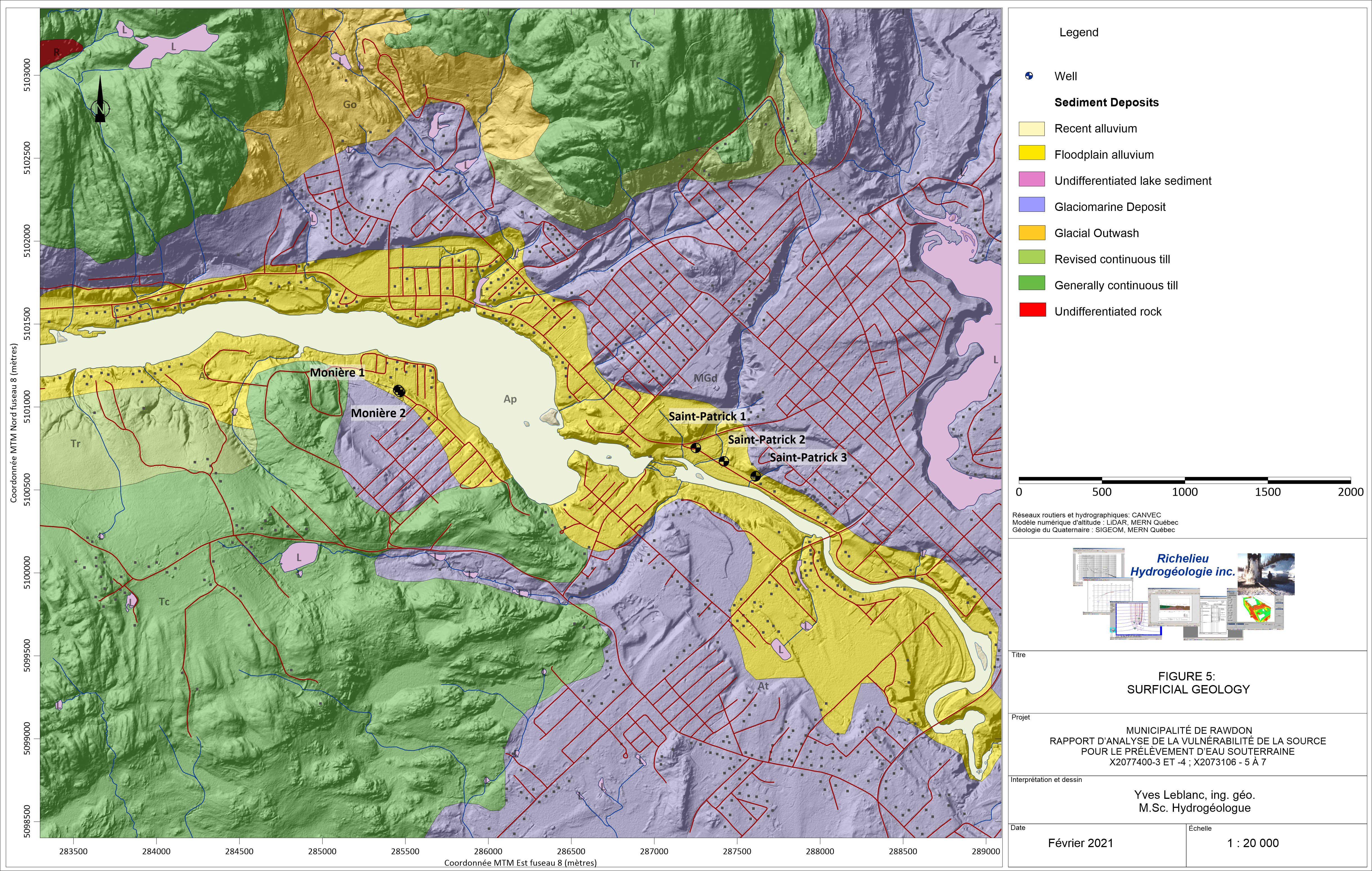 Surficial geology and topography map of the municipality

While it is one thing to be able to visualize these variables separately, what makes Surfer such a powerful tool for DRASTIC modeling is its Grid Math feature. With Grid Math Leblanc can multiply all of his individual DRASTIC variable layers by a ponderation factor. Once those weighted grids are created, they are then multiplied together to create the final DRASTIC Vulnerability Index.

“It’s easy to multiply all of my grids together because they don’t have to contain the exact same number of rows and columns.” 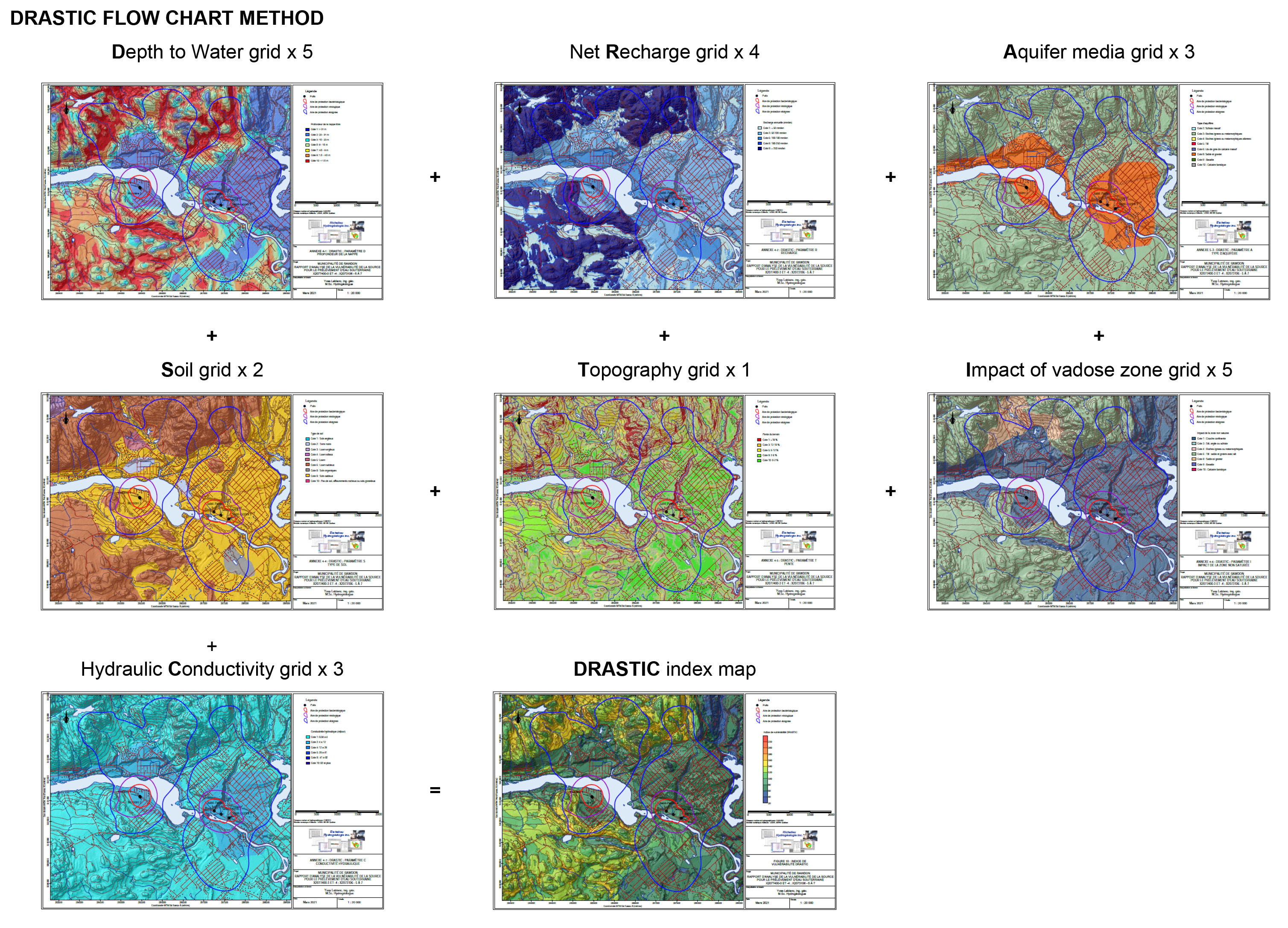 Once that final grid has been calculated it can be added as a contour layer and a simple to understand color scale is applied. Creating an intuitive, impressive map of the area’s most vulnerable to groundwater contamination. 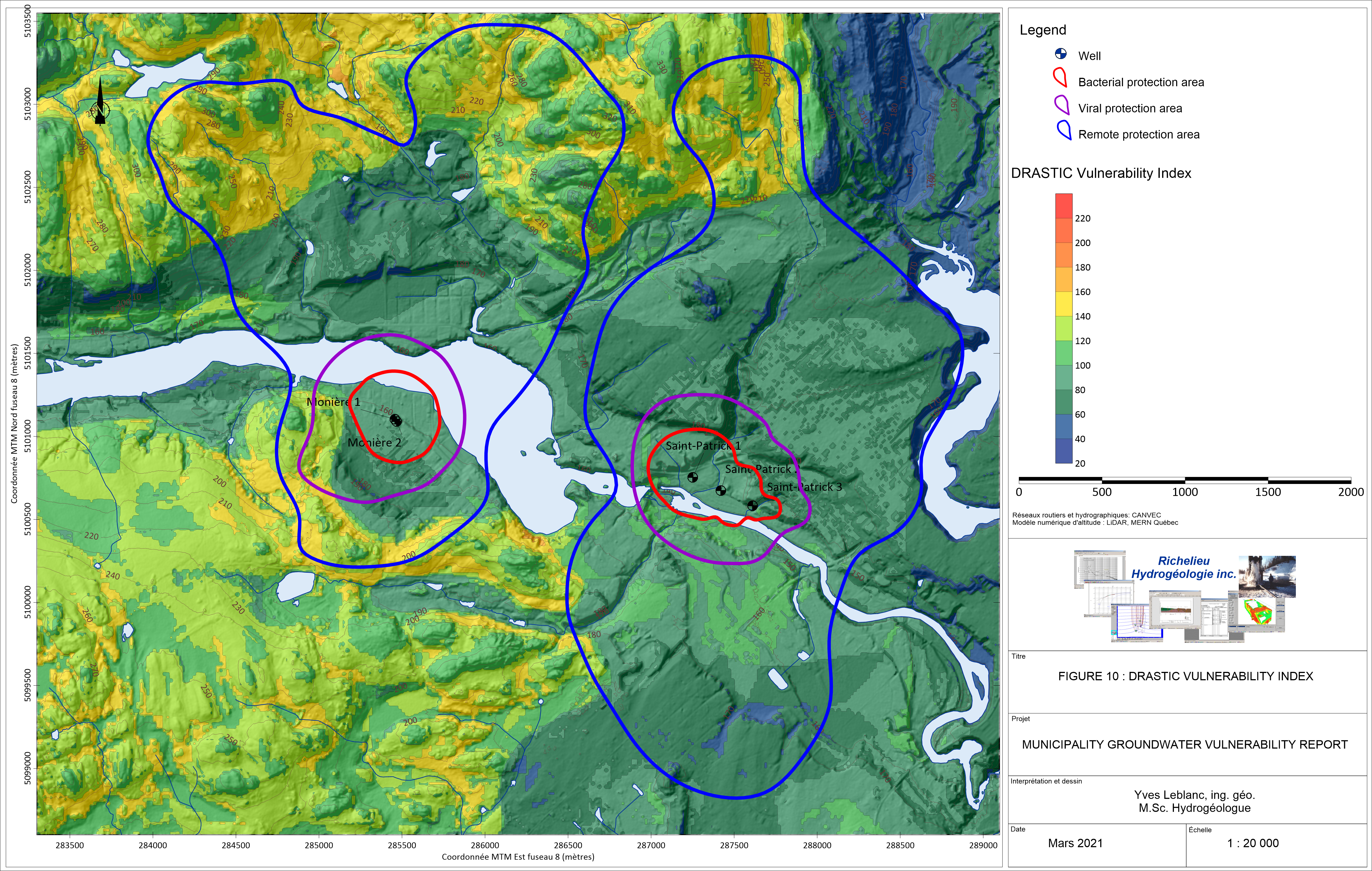 Final DRASTIC Vulnerability Index figure including the areas of protection for the municipality wells.

Within the final DRASTIC vulnerability report figure he can display key information such as the well locations, well protections areas, general topography, bodies of water and city plans. Painting a full picture of the site so that the Quebec government knows how to allocate remediation funding. As well as providing the local municipality with recommendations to safeguard their water supply from future contamination.