Igor Yashayaev is an Oceanographer affiliated with the Bedford Institute of Oceanography (BIO) of Fisheries and Oceans Canada. The BIO is the largest ocean research facility in Canada and is located on the eastern coast of Nova Scotia. It has a worldwide reputation for observing oceanic process, variability and climate change, which are also the main objectives of Yashayaev’s research.

Yashayaev is a firm believer in the proper analyses and visual presentation of data. If results aren’t presented properly the researcher isn’t paying respect to their own data. This strong belief in showing respect to his and his colleagues research data closely aligns with Golden Software’s own vision. Accordingly, it is no wonder he has been a long-time user of both Grapher and Surfer.

“If you can properly collect and value every bit of data, you should be able to let the ocean speak for itself …To really achieve this goal that data needs to be connected and framed so you can accurately, correctly and effectively unveil the mysteries of nature and present your findings to the world in a way the collective effort that went into the data collection deserves.”

Much of Yashayaev’s field work and research is performed in the Labrador Sea. For decades the Labrador Sea has been regarded as a key confluence point in the global ocean circulation and the planetary climate system as a whole. Through a process known as winter convection the sea transforms warm water arriving with the North Atlantic Current into much colder denser water and sends the cooled densified water south. This process and its impact on large-scale circulation is why the Labrador Sea is considered a key contributor to the regulation of Earth’s climate. 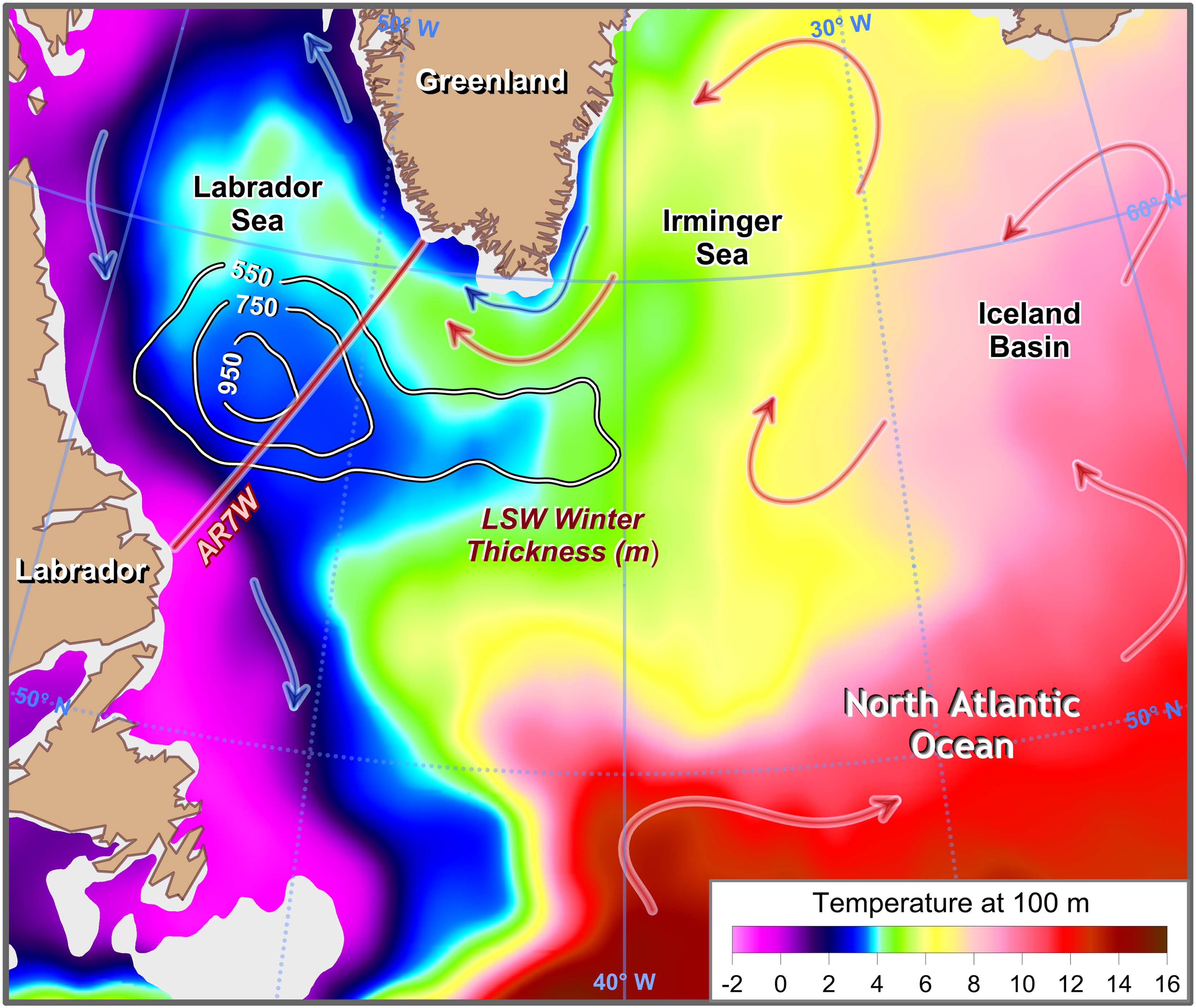 Ocean water temperature and current map created in Surfer. The map displays how warmer and colder waters are circulated through the Labrador Sea, and the average thickness of the layer of water mixed and homogenized by winter convection.

This winter convection process is just a gear in the massive oceanic conveyor belt known as the Atlantic Meridional Overturning Circulation, which plays a larger role in regulating the global energy balance. Albeit, a very important gear that is worth monitoring by scientists such as Yashayaev and his partners from other institutions and universities.

To properly monitor this region Yashayaev says it is best to view oceanography as a blanket, encompassing ocean observations at every level, from the sea surface to the seafloor. These observations are randomly scattered and the picture they paint is not static. The variables that this blanket encompasses include water temperature, salinity, concentrations of dissolved gasses and nutrients, ocean currents, sea level, and surface waves. The non-uniform texture of all these variables requires the use of Surfer’s anisotropy functions.

You can hear Yashayaev describe the importance of these variables in his own words in a video published by Fisheries and Oceans Canada below:

For a long time, the only way to collect the data required for studying the deep ocean was by navigating the freezing waters of the north Atlantic in manned research vessels. These days many researchers opt to utilize Argo floats. 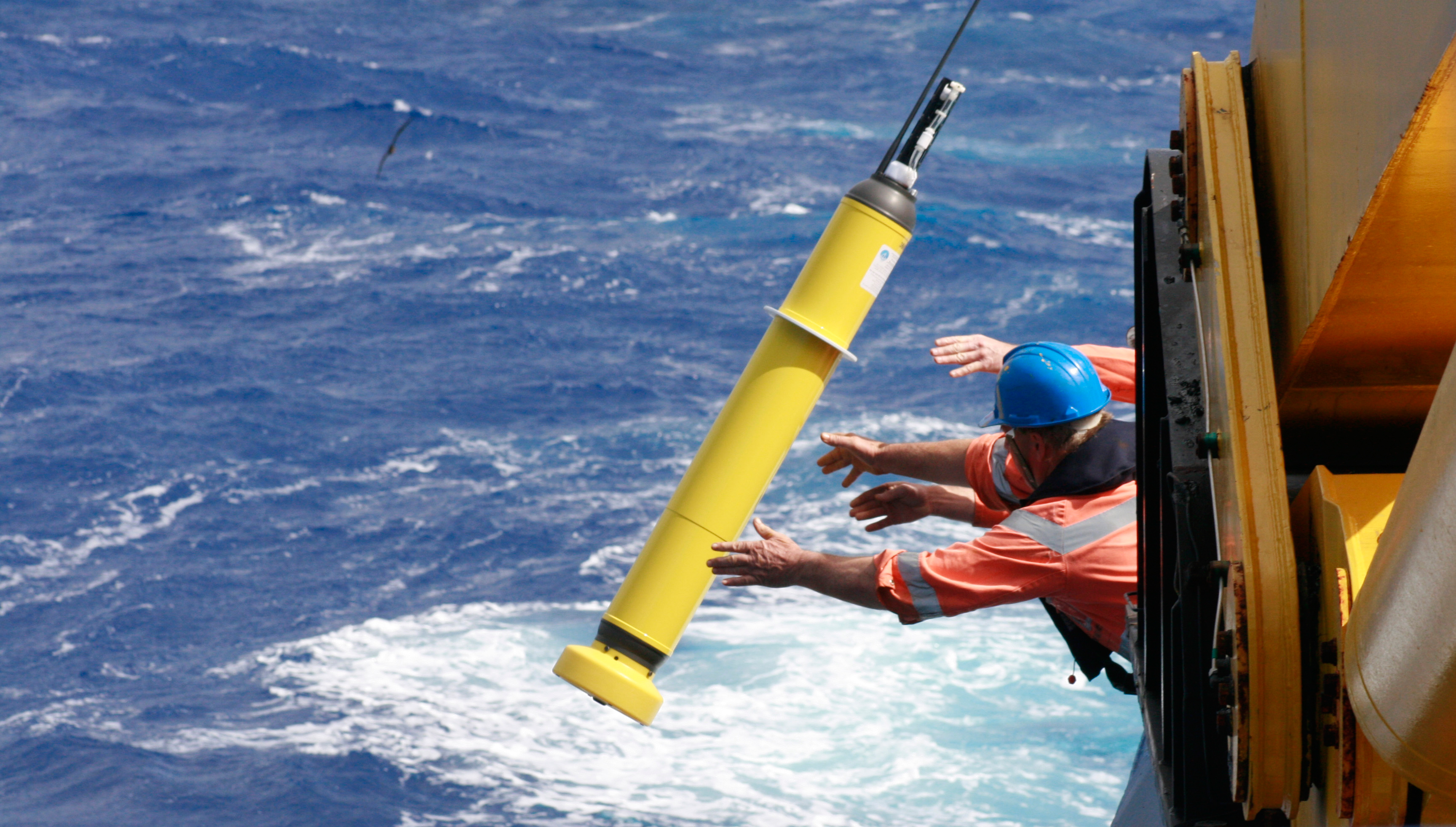 Argo floats resemble meter long yellow syringes which autonomously drift with ocean currents. Towards the end of their drifting cycle the floats dive to their maximum depth (2000 m) then ascends, taking consistent measurements of temperature and salinity along the way. Once the float resurfaces it transmits the collected data to satellites. The satellites repeat this submerging and resurfacing cycle several times, then forward the data to the national Argo data centers. This raw data is collected and processed before Yashayaev acquires it for subsequent analysis.

These Argo floats help provide a snapshot in time and are able to simultaneously massively increase monitoring efforts, and decrease manned field effort to paint the best picture of the Labrador Sea’s process, dynamics, water mass structure, variability and climate change. According to Yashayaev “The Argo program revolutionized the way we see the ocean – from once in a while sampling opportunity to year-round observation.”

Once data from the Argo floats have been received and gone through initial processing it is time to visualize the findings and let the ocean speak for itself. This is when Golden Software’s software packages come into play. Yashayaev’s preferred data visualization tool for single variable functions is Grapher. For multivariable functions he prefers Surfer due to its ability to process and map randomly scattered data. With Grapher he can display time series and vertical profiles of various variables all in one plot. These combined plots have a consistent, clean look across all the axes. Whereas other software either doesn’t have the option to include multiple variables in one plot, or doesn’t let you customize it to the point that the final product is publication quality.

Yashayaev finds that Grapher offers a perfect balance of options. One can either make a quick and simple figure, or if desired can customize every single element of the plot to a precise point.

He compares this level of customization to a painter on canvas:

“…it's similar to an artist choosing the exact brush size, stroke, and color to elevate his painting.”

“…what you see on the screen is exactly how it is printed. Other graphing programs are not always this way, the export may differ from the original plot presented on your monitor and can vary with different monitor size and resolution. With Grapher these small imperfections (upon export) are practically nonexistent.”

For maps that are included in his publications Yashayaev finds he can create journal quality graphics using only Surfer. The options available meet his color scale, transparency, and labeling needs without having to bring the maps into a third-party image editing software. 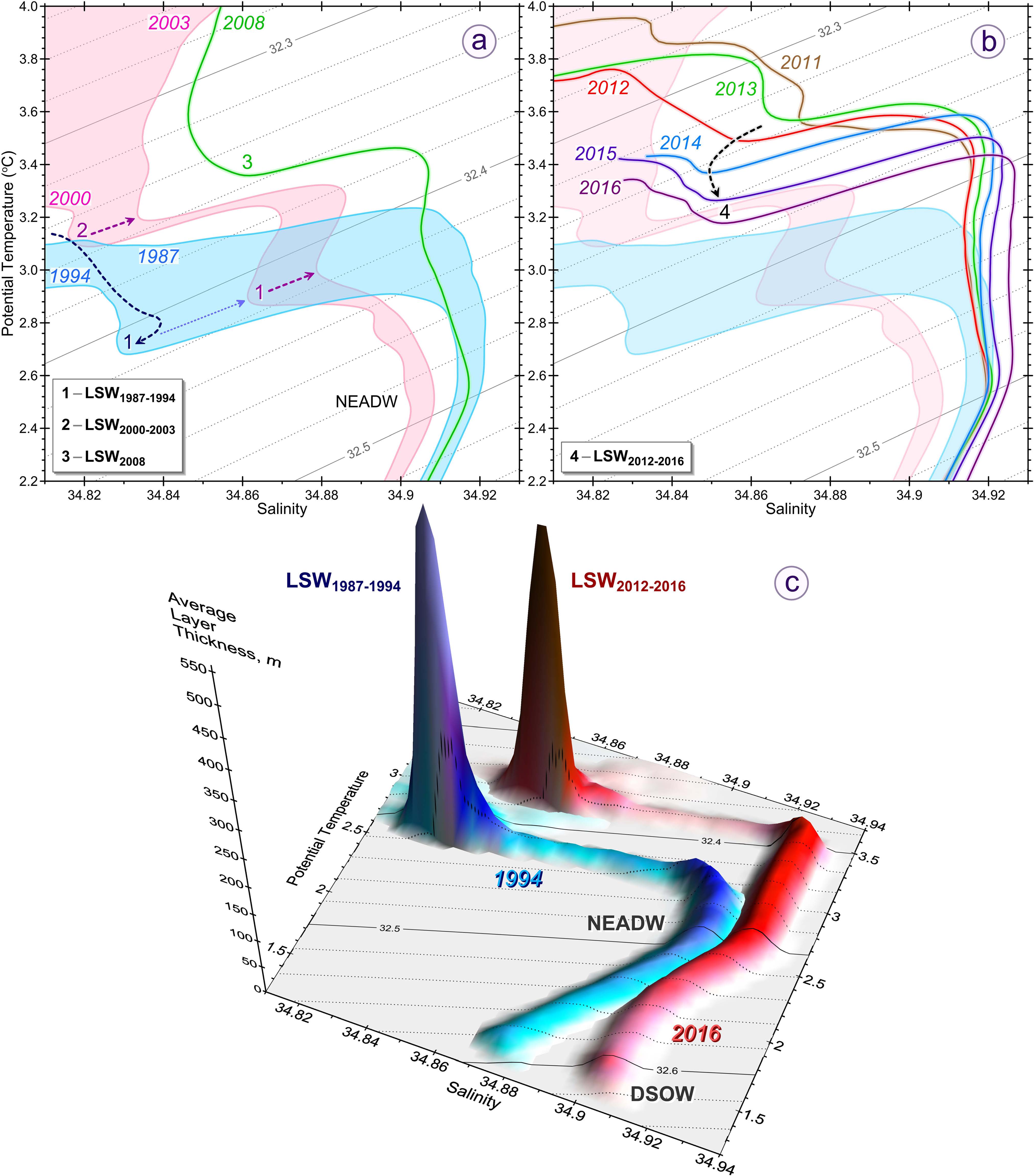 Temperature-salinity plots created in Surfer that represent the relationship between both variables during a moderately strong convection year in the Labrador Sea (2008).

As a final cherry on top, Igor feel confident in his choice of Golden Software because of how helpful and responsive the customer support team is. Over the years he has communicated with dozens of Support Agents and Product Managers. He finds the technical support always offers solutions within 24 working hours of him reaching out. Plus, if he makes a feature request a Product Manager directly follows up with him once it is added. Overall, this leads to him feeling as if his requests are truly heard and he is part of the development team.

His research is truly a collaborative matter between him and the Golden Software team, as any painter would attribute his work to the maker of his paint brush.

If you are interested in learning more about Igor’s work in the Labrador Sea and beyond, several articles of his published research are linked below. For more recent articles and examples of his results and artwork, as well as a wealth of practical recommendations on data processing and visualizations please feel welcomed to contact him directly at Labrador.Sea@gmail.com

Interested in testing these publication quality features out yourself? Try the free trial for Grapher or Surfer today!