A biological oceanographer is using Surfer to visualize how changing environmental conditions in Alaska impact the marine ecosystem and the blue economy.

“With climate change – as with any change – there will be winners and losers,” said Alexei Pinchuk, Research Associate Professor at the University of Alaska-Fairbanks.

Pinchuk, who works in the Fisheries Department at the Juneau Campus, intends to find out who those winners and losers will be. He is studying a localized marine warming event that occurred in the Gulf of Alaska from 2014 to 2016 as a foreshadowing of what could happen if global temperatures rise as predicted. 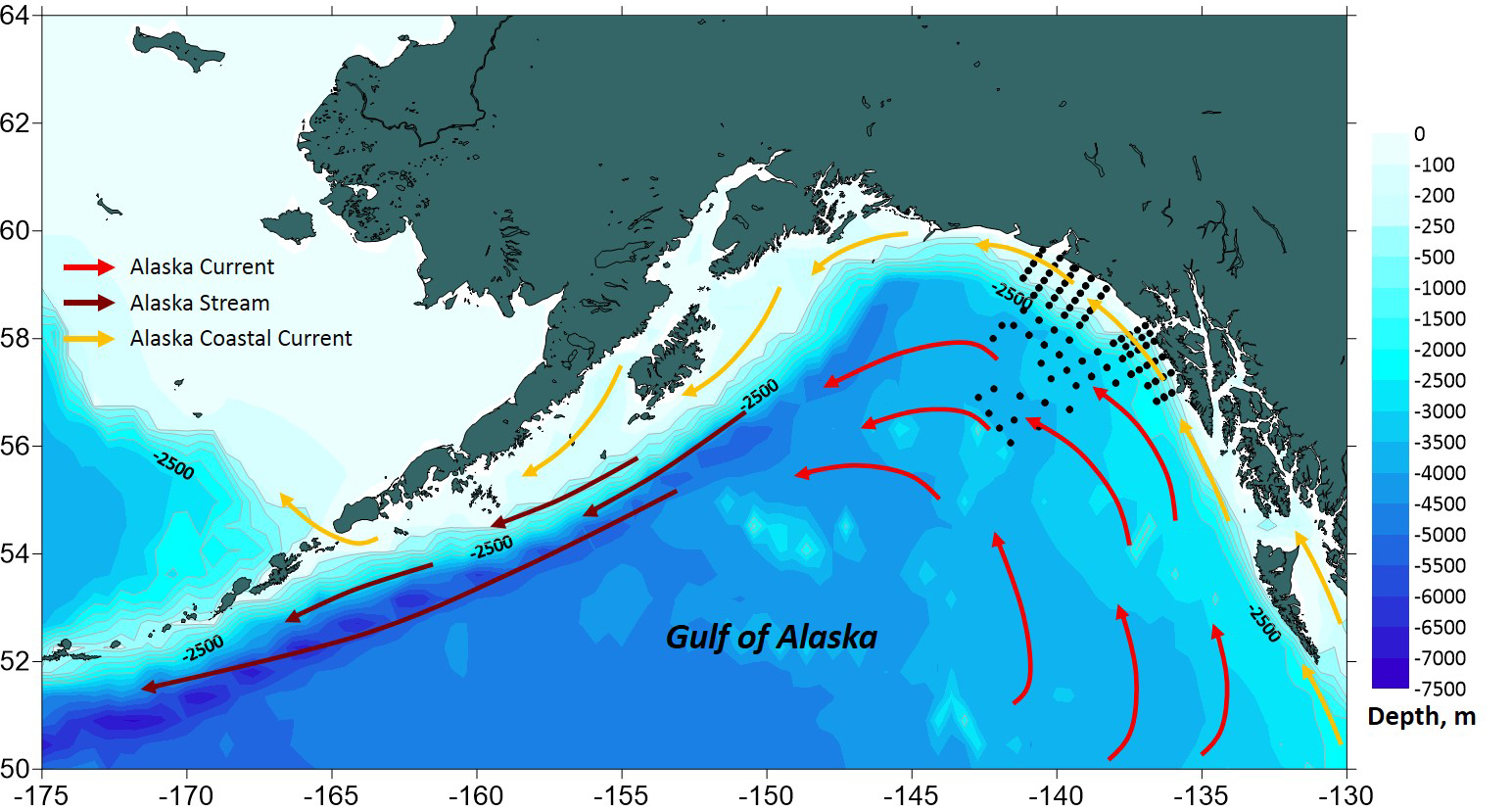 Water depth map illustrating the Gulf of Alaska currents and
the sampling locations Alexei and his team monitored in the summer of 2016-2017.

The research focuses on the presence of doliolids, a zooplankton common in Alaska’s coastal waters, and their impacts on the food chain. Throughout the marine heatwave and several times since then, Pinchuk and his collaborators used chartered vessels to collect data from the Gulf’s waters. At each collection point, they recorded water temperature and salinity, measured chlorophyll concentrations, and then used special nets to capture the zooplankton.

“We collected doliolids from different water depths…and then counted and measured them,” he explained. “The goal was to determine the density of doliolids per cubic meter of water.” 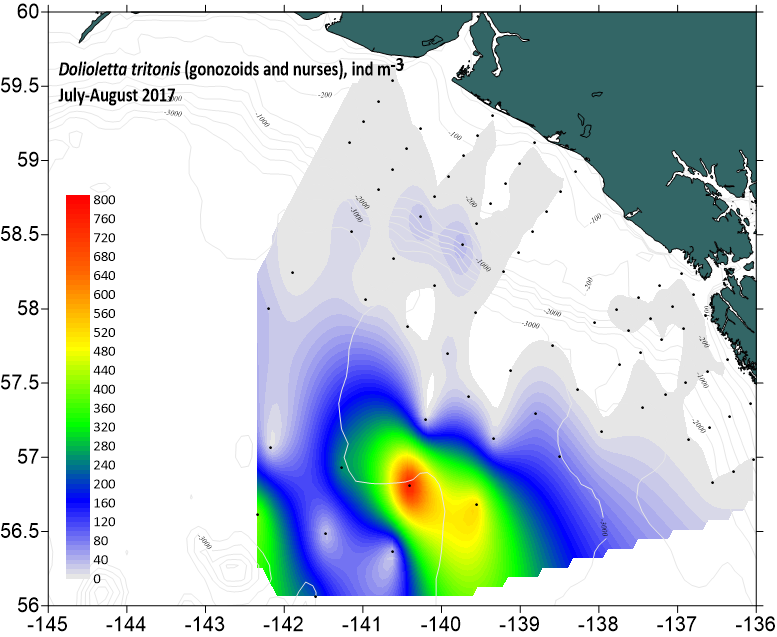 Spatial distribution of Dolioletta tritonis abundance (ind m− 3) in the
southeastern Gulf of Alaska in summer 2016–2017.

Pinchuk theorized that as water temperature increased, the doliolid population would grow as well. The problem this poses is competition for food, most notably phytoplankton and other zooplankton. The doliolids thrive on phyto- and micro-zooplankton, which are major food sources for larger zooplankton like copepods and krill, which in turn, provide food for many of the fish. Other fish species, however, eat doliolids. This means some fish might benefit from an increase in the doliolid population, while others lose out as their food sources become scarce.

Surfer was used to visualize three conditions in the Gulf of Alaska. The first showed the typical currents in the Gulf of Alaska with sampling points denoted. A second use of the software visualized the spatial distributions of important parameters – doliolids, temperature, and salinity. And the third application was to display the vertical profiles of temperature and salinity distribution at various depths in the water column.

Pinchuk chose Surfer for the project due to ease of use and compatibility with other analytics programs. For some aspects of the parameter analysis, he used Microsoft Visual Studio from which he wrote automated callouts to send data to Surfer for creation of necessary visualizations of his analyses. He appreciated Surfer’s ability to customize his maps and plots to generate visually stunning presentations that are easy to understand. 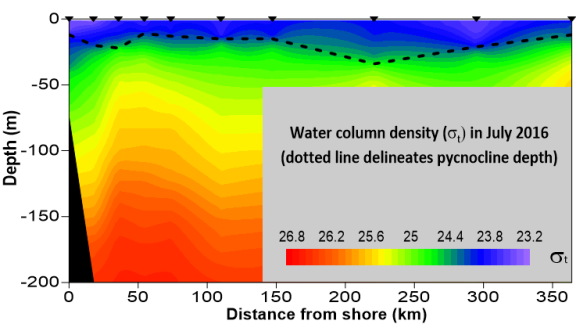 Vertical density (σt) profile showing pycnocline depth (dashed line) across the study area. A pycnocline
is the layer where the density gradient is greatest within a body of water.

The research confirmed that doliolid densities increased during warmer periods. But that accounts for just one small part of the food web in the Alaskan Gulf. Much additional work remains.

In the next steps, Pinchuk will examine how doliolids impact other zooplankton and what it might mean for specific fish species. This will be a complicated process because the food web is multi-dimensional. For example, many fish can change their diet depending on available sources, so the increase or decrease in one type of plankton may not be as devastating as it might seem.

And the surge in doliolids might not cause as much competition for phytoplankton as a food source as originally believed - the research has shown the phytoplankton population also increased with water temperature. Pinchuk plans to continue using Surfer to visualize the behavior of the Alaskan fish populations in varying conditions.

Data is from the journal Frontiers in Marine Science
Doliolid (Tunicata, Thaliacea) Blooms in the Southeastern Gulf of Alaska as a Result of the Recent Marine Heat Wave of 2014–2016