Subsurface Environmental Solutions, LLC, (SES), provides environmental site assessments for private and governmental clients. Steve Boynton, President of Subsurface Environmental Solutions, LLC elaborates about his business, “SES is a specialty environmental consulting firm focusing on characterization and remediation of sites impacted by releases of Light Non-Aqueous Phase Liquid (LNAPL).” LNAPL sites typically have been impacted by uncontrolled subsurface releases or spills of fuel oils or gasoline and require a characterization assessment before remediation efforts. An LNAPL characterization assessment for a manufacturing facility in Connecticut performed by SES is the focus of this case study.

Two 10000-gallon underground storage tanks were used to store No. 6 fuel oil at a large manufacturing facility in Connecticut. No. 6 fuel oil is a dense and highly viscous residual oil that is used for heating buildings. The tanks were removed during site renovation. During removal the tanks were found to have been leaking and creating an uncontrolled LNAPL release. Most states require an assessment after the discovery of an LNAPL leak; under Connecticut state environmental regulations this site was no different. SES was hired as a specialty subcontractor by a local Connecticut environmental consultant to develop a three-dimensional visualization of the extent of the LNAPL release and to assess the possible mobility of the LNAPL. SES’s objective was to delineate the lateral and vertical extent of the LNAPL and to visualize the LNAPL plume in 3-dimensions. At most LNAPL sites oil and gasoline contamination is typically found at and below the groundwater table near the release source. Once the LNAPL contamination penetrates below the groundwater table, it migrates horizontally in the saturated soil zone toward surface water discharge areas (such as rivers). Using Golden Software’s Voxler to create the 3-D site model made it easy for SES to visualize the LNAPL assessment data. 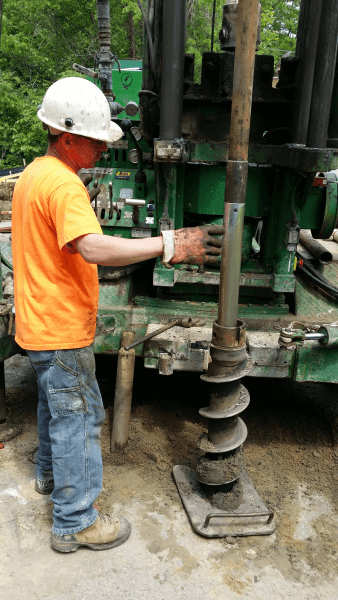 SES’s project included a data acquisition phase followed by data visualization. The LNAPL data acquisition included collecting soil samples using traditional hollow-stem auger drilling techniques (Image 1) and split-spoon soil sampling. Thirteen soil borings were performed over the area of interest, with continuous soil sampling across the LNAPL impact zone. Soil samples, typically one to two feet long, were composited (mixed) in the field. A mobile ultraviolet fluorescence laboratory (Image 2) tested the soil samples on-site, and confirmatory samples were sent to a local fixed analytical laboratory. Tabular data was developed from the assessment and was then used in the visualization process in Voxler. 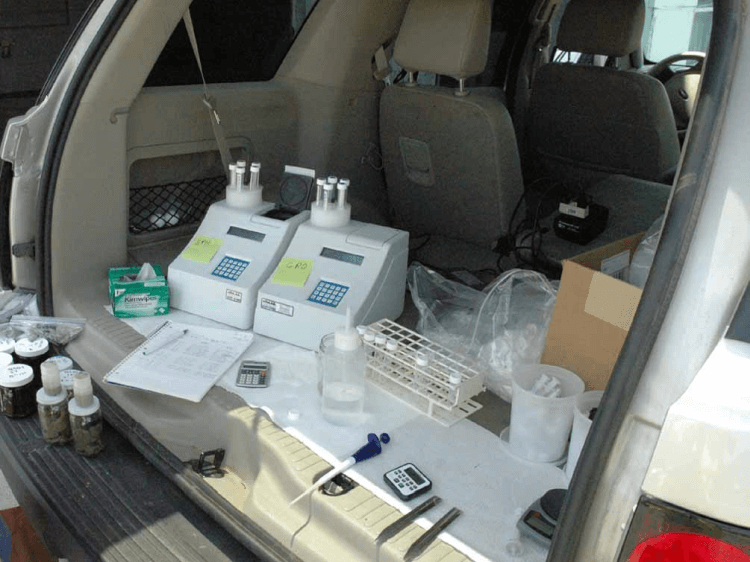 SES used Voxler to create 3D visualizations of the LNAPL plume along with other subsurface features such as tanks and the groundwater table. The site assessment data was tabulated for easy input to Voxler’s WellRender module. The WellRender module allows data along the boring path to be enhanced using color maps and variable boring diameter to accentuate the high concentration LNAPL zones (Image 3). Point data was extracted from the borings and was interpolated to create a 3D volumetric representation of the LNAPL plume using the Isosurface Module the site (Image 4). Underground tanks were created using the WellRender Module, and 3D surfaces for the groundwater table and the ground surface elevation were added to complete the visualization.

A profile view of the 3D model generated by SES which shows the higher contamination concentrations in reference to the water table. 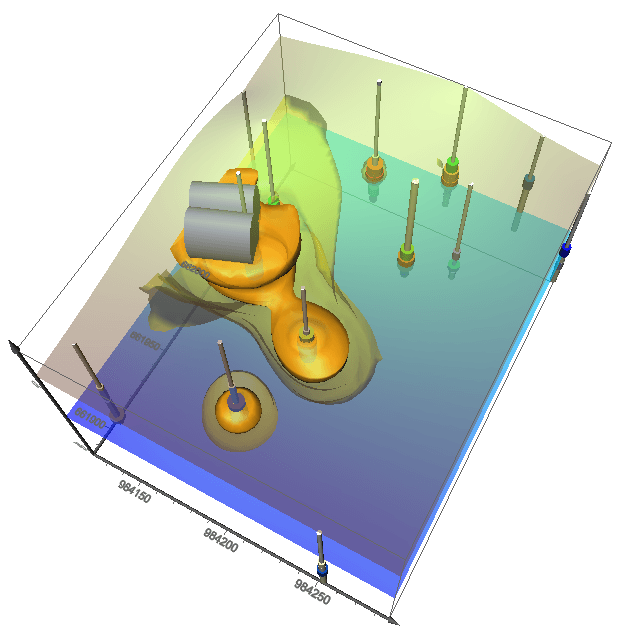 The 3D visulaization in Voxler, where the LNAPL contamination zone is delinated using isosurfaces

SES used Voxler, and specifically the WellRender and Isosurface modules to visualize site LNAPL data. Despite the relatively small size of the project, Voxler provided a cost-effective 3D-visualization solution to help the client understand site conditions. Steve Boynton, president of Subsurface Environmental Solutions, LLC has been using Golden Software products since 1986, starting with Grapher and Surfer. “As a small business, I choose Golden Software products because I need to produce graphics that are as good as or better than my larger competitors and to do that at a reasonable cost”.