The flexibility of Surfer to plot various types of data is impressive. Yet with a change in perspective, the versatility of Surfer can be expanded even further to cover a whole new class of plots. Visual Data Analytics routinely uses Surfer to plot time-series data as image (raster) maps. This allows the visualization and understanding of large temporal datasets not possible with most other ways of displaying time-based data. 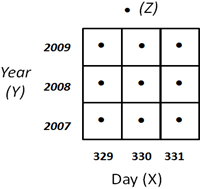 Above is an example of the grid format used to generate time maps (Koehler, 2004).
Source: http://arizona.openrepository.com/arizona/handle/10150/280516

One great example of such a Surfer plot is USGS Colorado River at Lees Ferry, AZ streamflow record (station 09380000). This particular location is one of the most important water resources in the western United States. Lee's Ferry is at the division between the Upper and Lower Colorado River Basins. An extensive political and legal "Law of the River" history can be found at: http://www.azwater.gov/AzDWR/StateWidePlanning/CRM/LawoftheRiver.htm

The Lees Ferry site is about one mile downstream of Glen Canyon Dam/Lake Powell and is upstream of Grand Canyon National Park. The timing and distribution of water in the river is critically important to a range of users. Because the station was in place before the construction of Glen Canyon Dam, the record shows both pre- and post-dam flows making for an interesting comparison.

For the traditional hydrograph below, the X axis is time (daily values) while the Y axis is the volume of streamflow (one cubic feet per second = 448.8 gallons per minute). 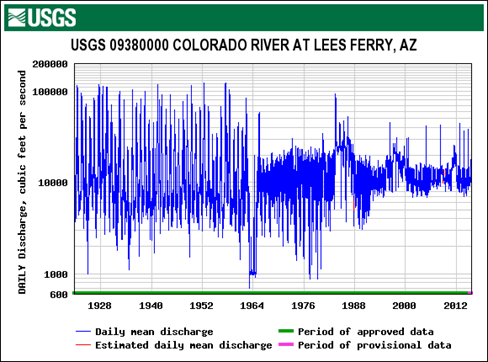 The above is a traditional hydrograph from the United States Geological Survey (USGS).
Source: http://waterdata.usgs.gov/usa/nwis/uv?09380000

While there are some patterns apparent in the traditional hydrograph, a wealth of information is simply hidden. This is where the power of Surfer comes into play. Below is a map of the same dataset plotted as a raster time map (an image map) in Surfer. This map reveals many previously hidden patterns. A key to patterns is shown below. 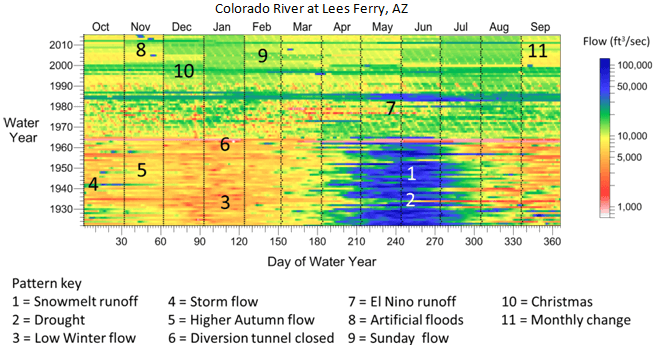 Another interesting time map is for adult Chinook salmon swimming upstream on the Columbia River. There are fish ladder structures to help the salmon bypass Bonneville Dam. The traditional display uses line graphs and a spaghetti plot. In this case only five years of daily data are shown along with a 10-year average.

When the data are plotted as a raster time map in Surfer, more temporal patterns are identifiable.

The spring run can be seen as higher daily fish counts for late April, the summer run is in June with an obvious low count from 1975 to 2000 and the fall run is late August through September with notable increases in the last few years.

Displaying temporal data as raster time maps is a significant improvement over traditional line and scatter plots to see major patterns over time, small or large scale shifts in patterns, and small scale variability in the data. All the data is displayed at once, in one map, in an easy-to-view manner.