Visualization techniques to get the most out of your data

Michael Cline is a Consulting Geophysicist with extensive 2D/3D seismic interpretation and prospect generation experience. Mr. Cline has a varied background in seismic acquisition and processing management and has had many successful wells drilled both within the US and internationally. He began consulting over 30 years ago and is President of T/X Resources, a technologically advanced petroleum exploration and development consulting service company. Mr. Cline has authored 14 technical articles and over 70 blog and LinkedIn posts. He is licensed by the Texas Board of Professional Geoscientists and is active in a wide variety of professional geoscience organizations, including the SEG and AAPG.

Mr. Cline takes pride in his tech-savvy approach to geophysical consulting. Early on, Mr. Cline recognized the value of personal computers and was quick to implement these tools into his geophysical interpretation work. "Before personal computers, the majority of our processing was done on mainframe computers. The turnaround time was atrocious," says Mr. Cline, "and forget about being able to run different scenarios to see how parameter changes might affect the output!" 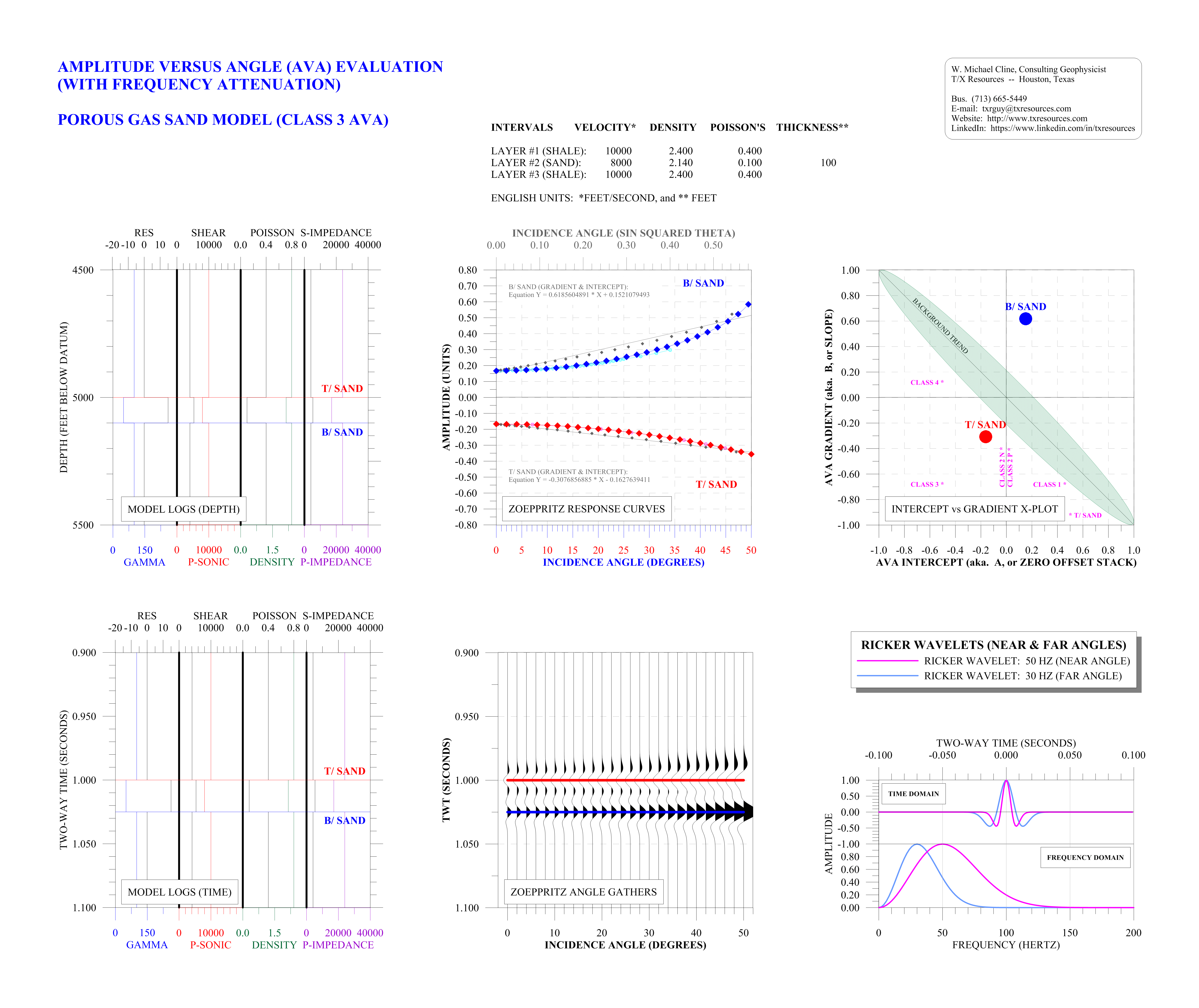 Some of the many graphs created by Mr. Cline to accurately analyze client data. Graphs plotted in Golden Software's 2D and 3D graphing software, Grapher.

Today, Mr. Cline licenses many different software tools for 2D and 3D seismic acquisition, processing and interpretation, seismic visualization, AVO analysis and modeling, structural and stratigraphic modeling, log correlation and petrophysics, and surface gridding and georeferencing. Over the years, Mr. Cline has developed his own software tools, along with new visualization techniques to highlight otherwise overlooked details of his data models.

One such technique applies multiple viewing angles to highlight smaller faults and features that may otherwise go unnoticed. 3D surface visualizations are powerful geoscience tools, but they are limited to a single viewing angle at any given time. When multiple features are displayed on a 3D surface, some may be hidden behind other features. To address this limitation, Mr. Cline used a Red-Blue-Green-Alpha (RGBA) color illumination technique currently used in Spectral Decomposition to highlight the subtle faults. He created multiple shaded surface maps with different light source locations. Each location is represented by red, blue, green, and alpha colors. The RGBA shaded surface maps are then combined and the combination of these colors results in more clearly defined dark grey linear features which highlight the subtle faults. 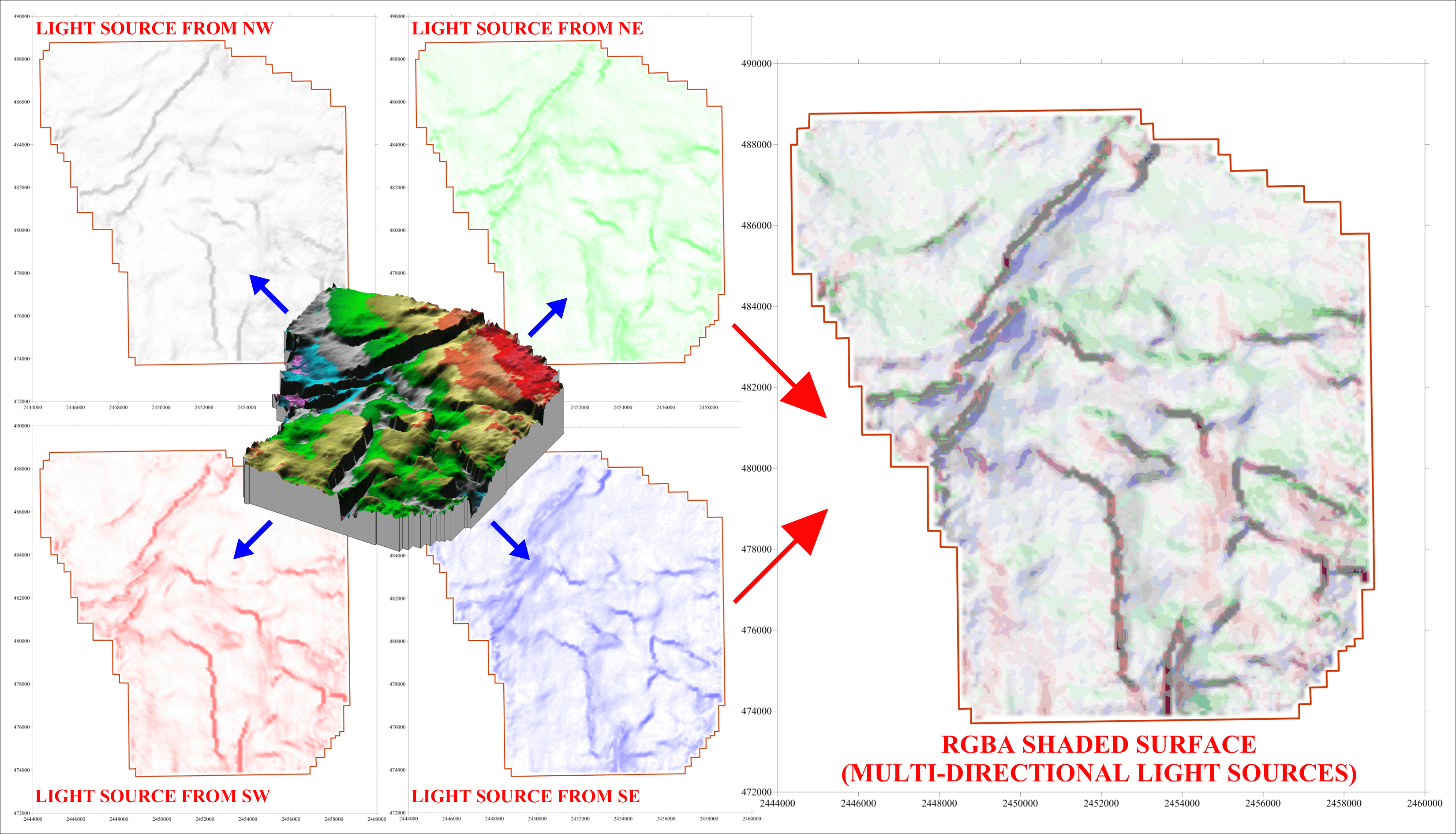 The final multi-directional light source map on the right was derived from the individual shaded surface maps on the left. This map provides an even more detailed field of view of subtle faults. Shaded relief maps and 3D surface map plotted in Golden Software's contouring, gridding, and surface mapping program, Surfer.

Another visualization technique used by Mr. Cline is the use of different map displays and interpolation software to improve seismic depth conversion. At first glance, the conventional 2D velocity and average depth maps below seem to be an accurate depiction of well control. The data was generated by a popular seismic interpretation software program using default parameters for the inverse distance gridding method. The resulting grid was then imported into Surfer for visualization. A near-perfect linear fit of the formation tops vs. calculated map depths was plotted in Grapher and also confirms a reasonable depiction of well-control.

However, when shifting to a three dimensional view, gridding artifacts which could have been overlooked in the conventional 2D depth map and average velocity maps, are easily seen. 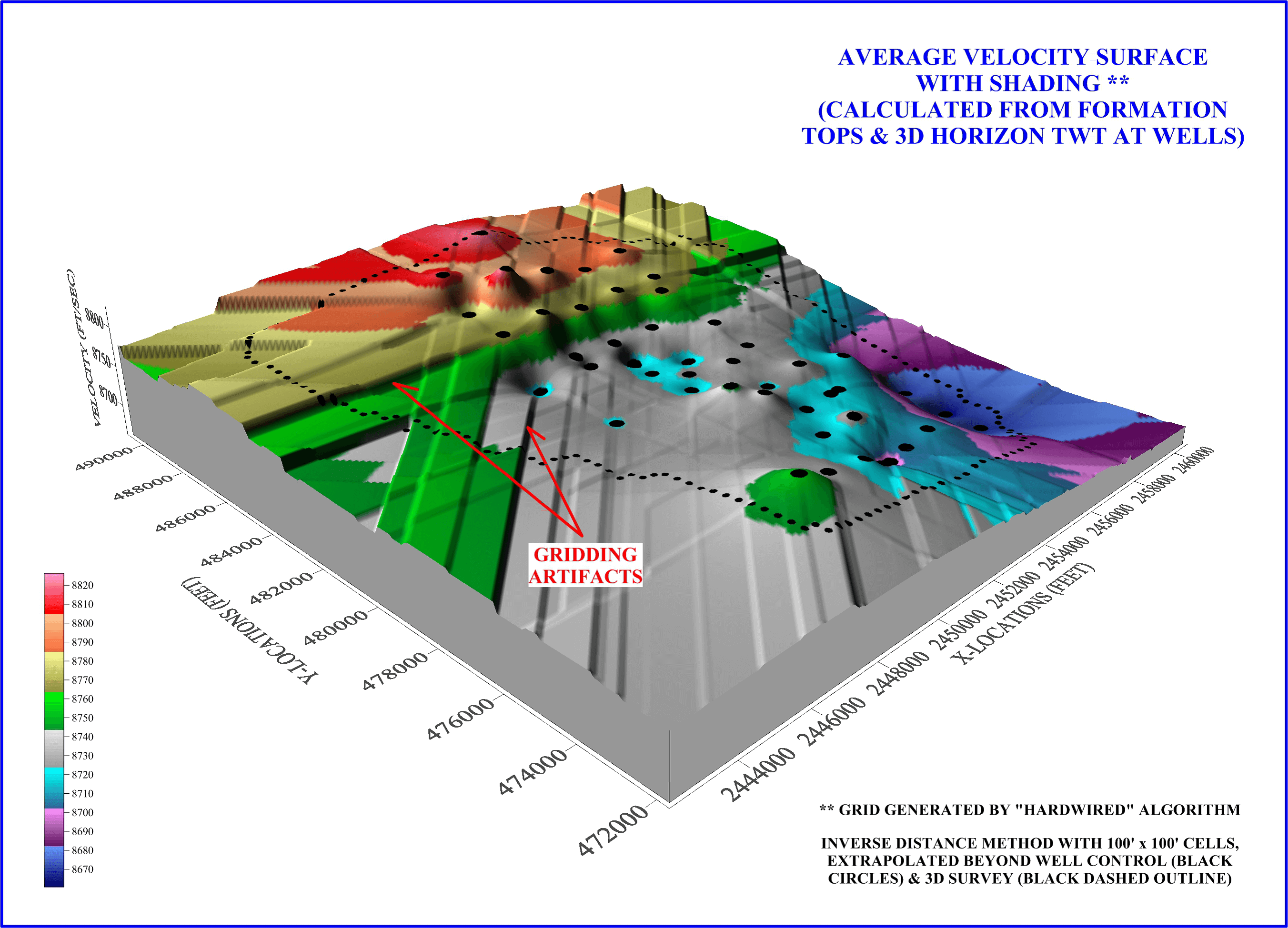 Velocity map displayed as a 3D surface. Map data gridded in another program and imported into Surfer for display.

Additionally, Mr. Cline emphasizes the importance of not blindly accepting gridding results. "Algorithm accuracy is most important when utilizing software applications," says Mr. Cline. "My work is used by clients to make multi-million dollar decisions. There must be no question about the accuracy of the software results." When the same data was gridded using the Faust Average Velocity method, and Surfer's inverse distance gridding algorithm, no gridding artifacts were created. 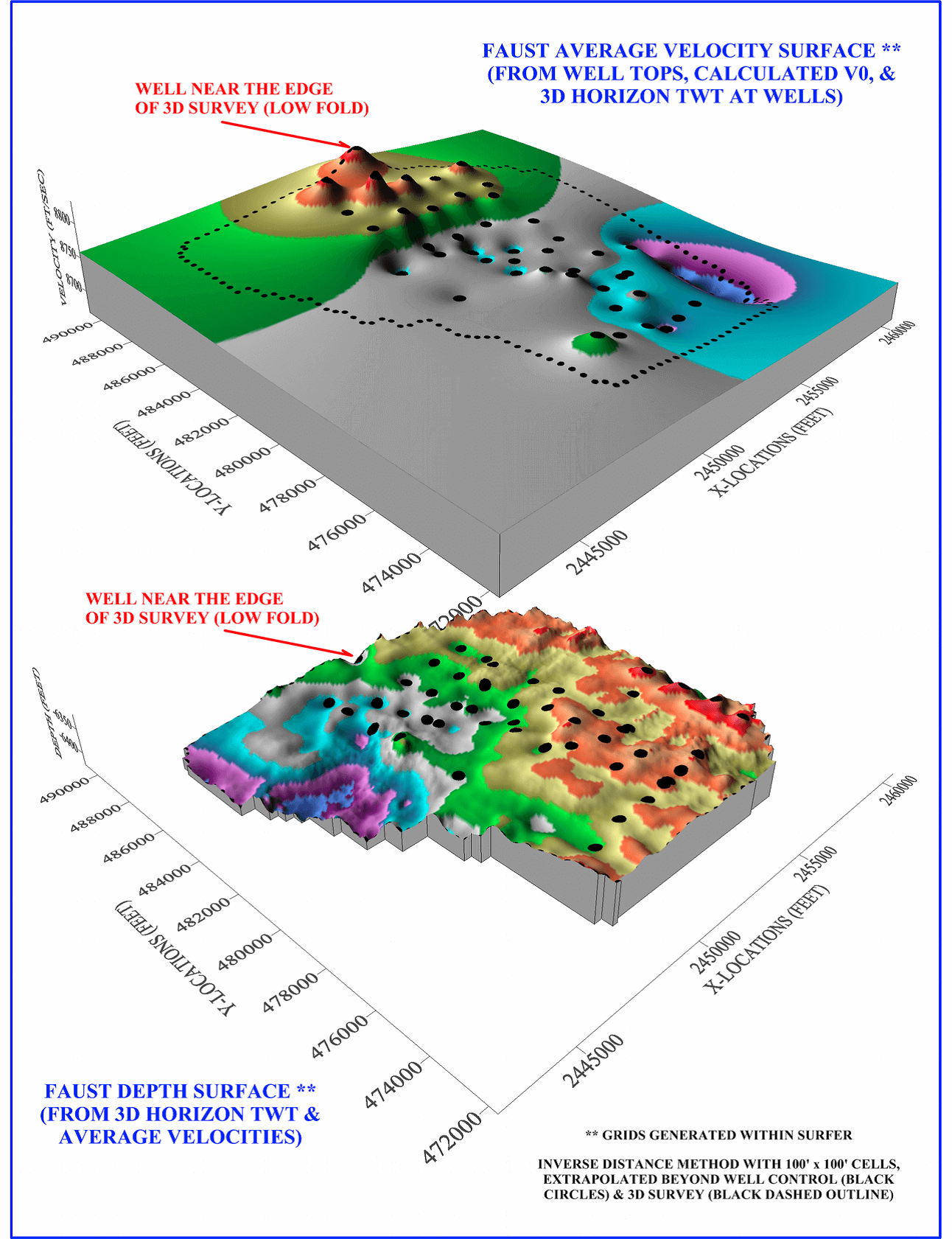 The same data gridded and displayed in Surfer resulting in artifact-free data.

Another example of the power of three dimensions is Mr. Cline's discussion about the underutilization of 3D crossplots. In this example, Mr. Cline displays acoustic impedance vs. porosity in both a 2D and 3D graphical display. 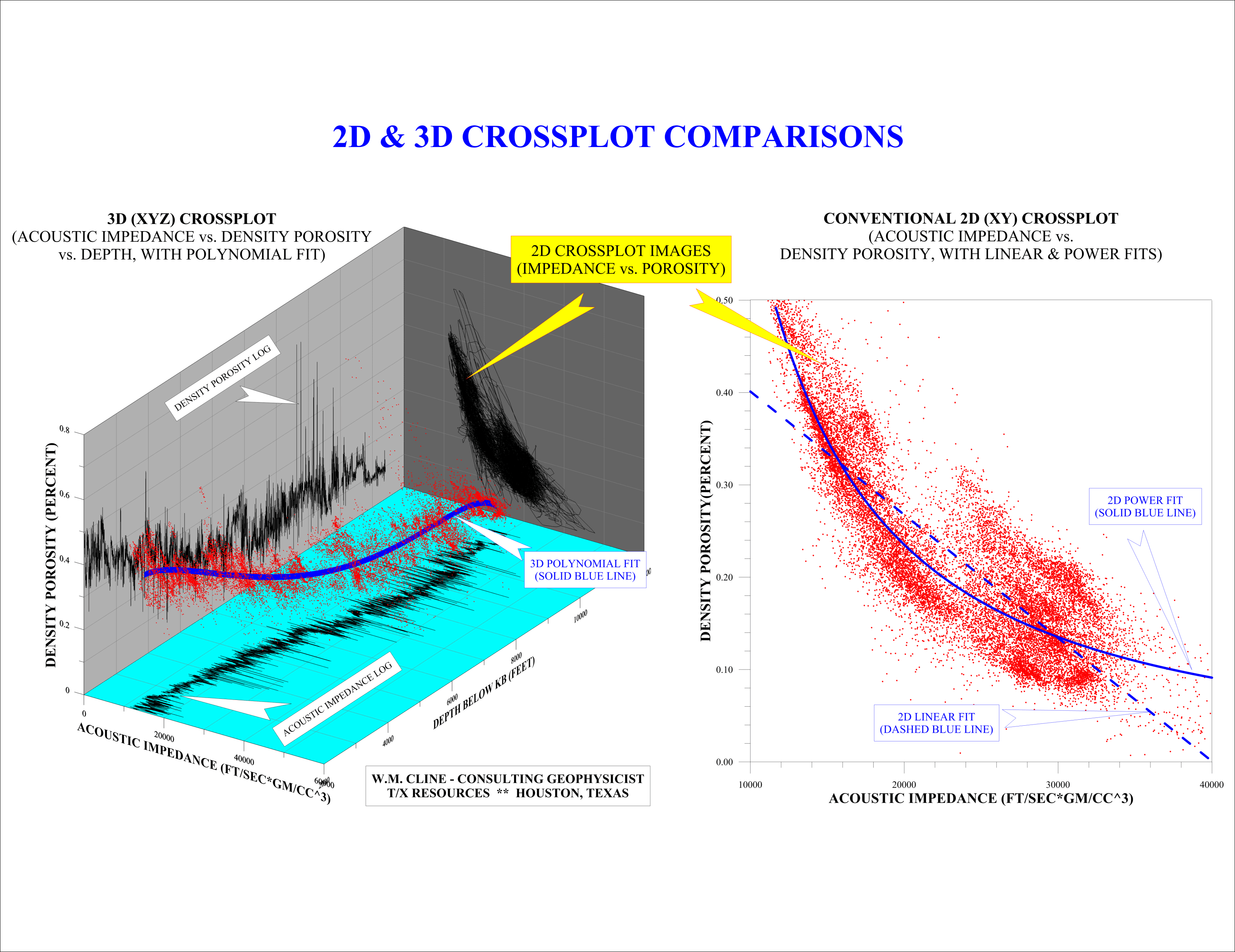 In the conventional XY crossplot on the right, a power fit seems to be a decent fit for the data, but when moving to the three dimensional plot on the left, a polynomial fit better represents the data. Additionally, when the XY crossplot is projected on the dark grey back wall of the 3D image, there appears to be two different trends, one near-vertical and one more horizontally oriented. When these two trends are projected onto the suspended 3D cloud (red points), the separation point appears to be between the shallow and deep portions of the well logs. Much more information is deduced from the 3D display.

Using a wide variety of software tools and visualization methods, Mr. Cline is able to make informed decisions and recommendations for clients. When asked what he likes most about the Golden Software programs, Mr. Cline replied, "I consider my Golden Software programs similar to the tools in a master carpenter's toolbox. Each one is indispensable, specialized, and produces results way beyond the everyday tools. They are irreplaceable."