Over the years, one of the most common questions asked is “How can I get my contour map out of Surfer mapping software and into ArcMap?” It's actually quite easy to get maps from Surfer into ArcMap. You can just click File | Export from Surfer and export to a shapefile (*.SHP). There are other formats you can choose (e.g. DXF, MIF, GeoTIFF, etc.) but I will focus on SHP for this article.

When exporting a SHP file from Surfer, you do have a few options to choose from regarding the storage of points, polygons, marker symbols and text. What options you choose depends on what is in the Surfer file you are exporting, what version of Surfer you are using, and ultimately what you want the SHP file to contain.

Let’s say you gridded some data in Surfer 13, created a contour map, overlaid a post map showing the original point locations, and wanted to export it to a SHP so you can import it into ArcMap. Note that when exporting to a SHP file, it is best to not show contour line labels, as they would create a break in the otherwise continuous contour polyline.

Export a contour map from Surfer 13 to a SHP file using File | Export and import it into ArcMap.

To export this map, you would:

a. On the Scaling page, make sure the Scaling source is set to Map. This will set the File Rectangle coordinates to map units and allow the map to be exported in the map units. It is very important that the coordinates under File Rectangle are in map units. If you are using an older version of Surfer (Surfer 11 or earlier), then there are a few extra steps you may need to do to get map units in the File Rectangle boxes (see our KB article online). The only time you cannot export in map units is when you export 3D surface or wireframe maps. These map types are not suitable for export to SHP. 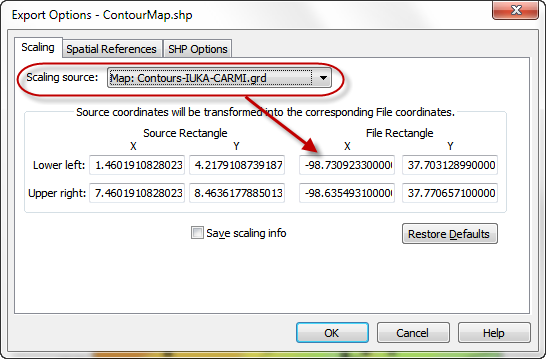 On the Scaling page, make sure the File Rectangle units are in map units. 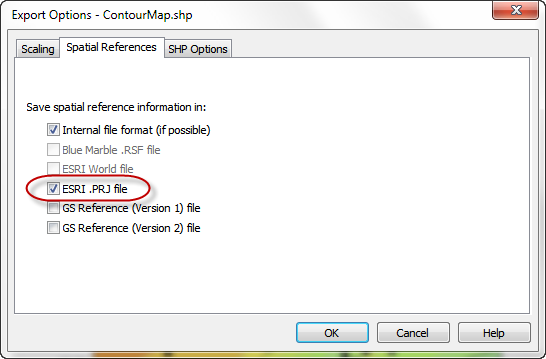 On the Spatial References page, make sure ESRI .PRJ file is checked.

c. The SHP Options page is where you tell Surfer how to export the information to the SHP. You may or may not be aware that SHP files can only have one object type per file. You can have points, polylines or polygons. You cannot have more than one type of object (e.g. a point and a polyline) in a single SHP, and no other object types (e.g. text, images) are supported. When exporting multiple object types to SHP, Surfer can either convert all objects to polylines and save all objects to a single polyline file, or it can write points and polygons out to their own files. 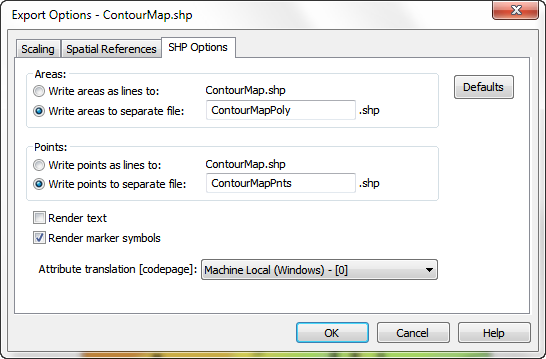 Select the desired options on the SHP Options page.

i. Under Areas, select whether Surfer should convert the polygons to polylines, or if it should keep the polygons as polygons and write them out to a new polygon file. It is really up to you, but most users create a separate file for polygon objects.

ii. Under Points, select whether Surfer should convert any point objects to polylines, or if it should keep the point objects and write them out to a new point file. Again, this is up to you but must users create a separate SHP file for point objects.

iii. Since text is not supported in a SHP file, if you want to include the text objects (e.g. axis labels, contour labels, etc), you can check Render text. That will convert the text characters to individual polygons and write them out as polygons using the option selected under Areas. Most users don’t require text in their SHP files and don’t want extra polygons, so I will leave this unchecked. That means that no text (axis labels or contour labels) are exported to the SHP.

v. The Attribute translation [codepage] option allows you to specify a different codepage for the text in the DBF file (the attribute file) associated with the SHP. In most cases, you will want to leave this set to the default.

d. Click OK and the SHP file(s) are created. In this case, Surfer created two SHP files: one for my polyline objects (the contour lines and axes) and one for the polygon objects (the contour fill and marker symbols, since I chose to render the marker symbols as polygons). Each SHP file created will have a number of associated files with it, such as CPG, DBF, PRJ and SHX. 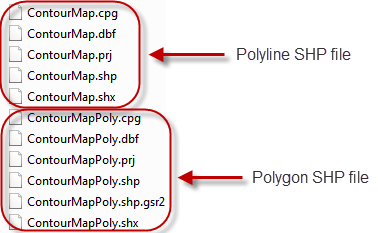 When exporting to a SHP, the associated files (CPG, DBF, PRJ, and SHX) are also created.

Now the SHP file is exported, we can import it into ArcMap (I’m using version 10.3).

Select one of the contour polylines and you can see the original Z value is stored as the ZLEVEL attribute.

If I add in the ContourMapPoly.shp layer, the polygons are added to the map. The shape of the original posted points is displayed since the markers are now polygons. You could add attributes or color the polygons as you desire. 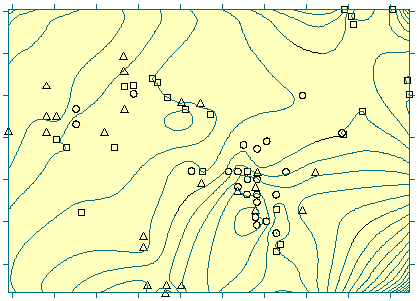 Import the polygon file and you can see the contour fill and marker symbol polygons.

As a comparison, if you did not check the option to have the marker symbols rendered in the Export Options dialog, then Surfer would have generated three SHP files (one for the polylines, one for the polygons and one for the points). If you imported all three into ArcMap, you could see the same polylines, but the polygon file would not contain the marker symbols. The points would be saved in a point SHP file and when that file is imported into ArcMap, the points are displayed using the default symbol. 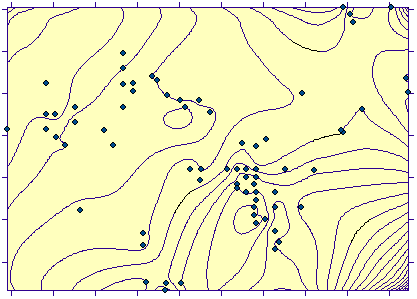 Do not render marker symbols during export, and points in a post map are exported as points instead of rendered as polygons.

There are a couple other scenarios that might interest you. You can also export contours to a shapefile by clicking the Map | Export Contours command. What is the difference between File | Export and Map | Export Contours? The Export Contours command only exports the contour lines themselves. The fill polygons, points, and any other map objects are not exported to the file. In addition, you have the option to export 2D SHP files (where the Z value of the contour lines is saved in the DBF file, equivalent to File | Export) or as 3D SHP files. The 3D SHP file option stores the Z values for each vertex in each polyline. Some rules of thumb:

One other option for using Surfer in conjunction with ArcMap is to generate the grid in Surfer, save it from Surfer as an ESRI Arc grid file, import it as a raster into ArcMap, and recreate the contours directly in ArcMap. ArcMap does accept Surfer grid files (*.GRD), but for some reason it does not recognize PRJ files associated with the GRD, so you lose the coordinate system information. To keep the coordinate system information, it is best to convert to one of ESRI’s grid formats directly before use in ArcMap. For example: 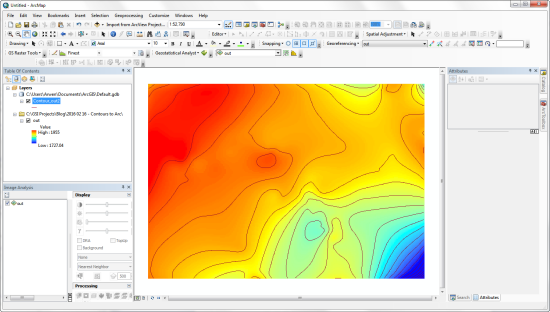 Create ESRI grid files in Surfer and load them directly into ArcMap as rasters.

Golden Software makes every effort to ensure Surfer is compatible with other popular software packages like ArcMap. If for any reason, the export isn’t working the way you expect it to, please email the Surfer *.SRF file to surfersupport@goldensoftware.com, report what version of Surfer you are using, and describe what is wrong when you export it to a SHP file (or whatever file format you select).

Hello. Do you have software for locating caves.

0 Cancel Reply
Hello. Do you have software for locating caves.
Cancel Update Comment

How does Surfer Mapping Software works for construction and geotagging area within surface?

So select Map in the Contents window, and in the Properties window click the Coordinate System page. Click Change, select the coordinate system for the map and click OK (just click OK if you get the warning about the unreferenced layers). Now you can click File | Export and export to the SHP file. As long as the map has a coordinate system defined for it, the Spatial References tab should be in the Export Options dialog.

why does my export options dialog window not include a "spatial references" tab?
Any other way to assign a .prj to an exported shapefile (in Surfer.. I can do it in ArcCatalog)?

0 Cancel Reply
why does my export options dialog window not include a "spatial references" tab? Any other way to assign a .prj to an exported shapefile (in Surfer.. I can do it in ArcCatalog)?
Cancel Update Comment

Can we export the following from surfer to arc map with all spatial and project information :
1_ 3D Suface raster
2_ vector map
3_ shaded relief map