We recently received an update on the case of the missing diver. The blog has been rewritten to reflect this new information.

November 20, 2011 - Four recreational divers went looking for wreckages at the bottom of De Nieuwe Meer in Amsterdam, Netherlands, an approximately 30 meter deep lake. The group split into two pairs and set out on their adventure. They were well-equipped and all wore full face diving masks.

Around 11:30 AM, an emergency call was made by the diving group to report a fellow diver was missing. The woman diver, who was paired up with the missing 55 year old man from Amstelveen, reported looking back for him, but all she could see was a cloud of sediment. The two had just climbed over a 6 foot cooling water pipe. They were aware of the pipe, which was used to suck up water from the lake to cool several city buildings, as they had crossed it during previous dives. Her diving partner never surfaced.

Following the call, emergency responders arrived on scene including three different fire departments, the police, and ambulance service. The fire department immediately deployed divers and boats to locate the missing diver. Thereafter, the police deployed cadaver dogs who were trained to locate people beneath bodies of water. 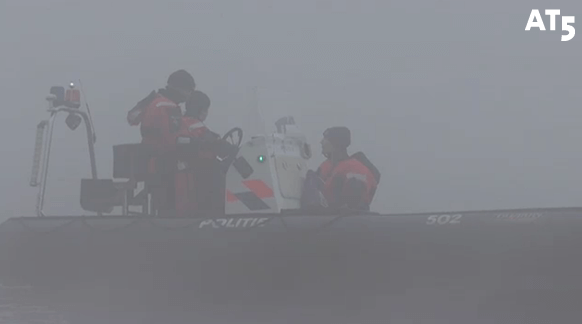 Rescuers operating the sidescan SONAR. Picture from AT5.

According to Dutch protocol, the first hour a diver is missing, the "Golden Hour," is the most critical as chances are greater that the person will be found alive. Thereafter, chances of a lifesaving operation diminish. For this search and rescue, the Golden Hour was extended because the diver was wearing a full face diving mask, and his oxygen tank had approximately 3 hours of dive time. Even if the diver was found unconscious, the full face mask should prevent water from entering the lungs and should keep the oxygen flowing.

Due to dense fog, the search was called off on the first day; however, the other two male divers who were part of the original group, continued to search for their missing friend, but to no avail. The following day, National Police divers and specially trained cadaver dogs joined the search. Due to the cold water temperatures and the length of time the diver was underwater, it was unlikely he would be found alive. Another special police task force joined the retrieval mission and came prepared with side scan sonar to collect data of the lake bottom. On the third, fourth and fifth days of the search, the Royal Dutch Navy brought in autonomous underwater vehicles (AUVs) but, even after these efforts, was unable to locate the body.

On November 25th, the site was opened to any public entity wishing to participate in the search. It was at this point when Henk de Vries and the former Metaldec Survey BV entered the picture. Metaldec Survey used Golden Software products Didger, Voxler, and Surfer for a wide variety of projects including visualization work for several police departments. They had previously helped the police and fire departments to set protocols for forensic drowning scenes and were often known to volunteer their efforts for various police projects.

At the request of private police agents, Mr. de Vries and his team got to work. The original diving group had been equipped with devices that took depth recordings every 30 seconds during their dive. Mr. de Vries used this data, along with echo sounding data, and created a 2D contour map and 3D depth map of the lake with the help of Didger and Surfer. These maps were used to identify the dive path taken by the missing man to determine approximate location where the diver had gone missing.

Thereafter, a higher resolution bathymetric map was created by the Metaldec Survey team. In this refined area, Metaldec set up their side scan and Echo sounder sonar equipment to collect further data. The side scan and bathymetric map played a crucial role in the search endeavours as SAR divers could “see” the lake’s bottom. They were then able to safely plan their dive by using the given depths as detailed on the bathymetry map and address any dangers such as barbed wire, cables, or fishing nets prior to the dive. All dives that utilize a bathymetry map prior to the dive can save lives as it reduces the chance of decompression sickness, also known as the bends, since divers can avoid unexpected and drastic dive ascents and descents and can also calculate the maximum bottom time.

Additionally, the Sonar Tow-Fish, an expensive tool used to collect sonar data, needed the bathymetric information so it could be towed 20 feet above the bottom of the lake. Without the bathymetric map, it would have been almost impossible to coordinate when the Tow-Fish should be raised or lowered depending on the lake bottom. 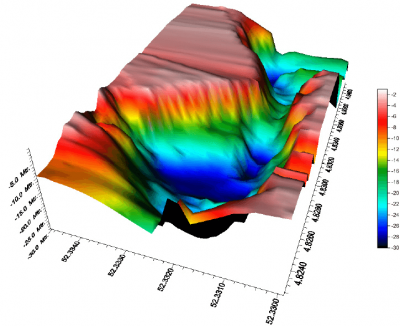 Mr. de Vries overlaid his sonar and bathymetry data on a Google Earth image of the lake and made a surprising, and concerning, discovery. The pipeline running through the middle of the lake did not cross the entire lake as everyone had assumed. Instead, it stopped at an inlet near the center of the lake. No previous divers had ever mentioned this, but it was assumed all SAR divers could be in danger of being sucked into the pipe. All diving was immediately halted.

Interestingly, this inlet area was near a location where the SAR dogs were alarmed and where the original diving group believed their fellow diver disappeared. It was initially thought the man was sucked into the 6 foot wide pipe inlet. After further analysis of the sonar images and discussions with the pipe owner, it became clear the inlet was closed off by a wire cap. The inlet actually consisted of 6 upright pipes that were capped with wire meshes to prevent debris from clogging the pipe. It was then assumed the diver became stuck on the pipe or on one of the wire caps.

The lake was dredged to no avail. On January 6, 2012 the search was called off permanently, as no body had been found.

A year and a half later, on July 6, 2013, a local cadaver dog foundation searched again around the pipe inlet. As before, the dogs became alarmed in this vicinity. A drop camera (video camera connected to a monitor on a boat) was lowered, and an image that appeared to be a human face was spotted. The following week, the Mayor of Amstelveen saw the video images and asked the Dutch Royal Navy to revisit the site and inspect the new findings.

A few days later the Navy arrived on the scene and searched again with their AUV sonar. As before, the bathymetric Surfer map and side scan sonar mosaic helped the Navy program their AUV and prepare individuals for another dive. The AUV data didn’t initially show the body, but later that day, the missing diver was found by the Navy and his body was successfully recovered.

An autopsy was unable to reveal the cause of death. Instead, the man’s dive computer, used to track his diving depth intervals, was used to piece together the final minutes of his life. The data showed the man had ascended to the surface of the lake then descended back to the bottom. Five minutes after he went missing, his computer showed no movement of any kind. The man most likely died of heart failure or a stroke. This hypothesis was supported by the fact his oxygen tank was half-full and his diving gear was completely intact.

The case of the missing diver became one of the largest missing person cases in Holland. Thanks to the Royal Navy, police and fire departments, detective agencies, and many volunteer groups and individuals, the diver was finally laid to rest.

Henk De Vries now works for RemoSens BV (short for remote sensing) where he and his team continue to utilize Golden Software products to create a wide variety of maps and models.

To read more about this case, check out the featured article in GeoConnexion International Magazine: http://www.geoconnexion.com/uploads/publication_pdfs/int_v15i14-030-Gold16211EB.pdf

Giving the family closure is the next best thing to rescue. Keeping the SAR divers safe until the inlet for the pipe was examined and detailed was a great reminder to not become another subject.

0 Cancel Reply
Giving the family closure is the next best thing to rescue. Keeping the SAR divers safe until the inlet for the pipe was examined and detailed was a great reminder to not become another subject.
Cancel Update Comment

Too bad the man died, but it is an interesting application of the mapping software. Thanks for sharing.

0 Cancel Reply
Too bad the man died, but it is an interesting application of the mapping software. Thanks for sharing.
Cancel Update Comment
1