I recently read about the decreasing gender wage gap for newly graduated college students in an article on the Liberty Street Economics, the blog of the Federal Reserve Bank of New York. In the article, there is a statement that “among recent college graduates, men earn about 3 percent more than women overall” but that the gap “widens significantly as workers approach mid-career”. The article summarizes this mid-career group of individuals, where they find that “men earn about 15 percent more than women.” Being the inquisitive person that I am, I wondered how these statements could be made – what evidence was there supporting these statements? I could have taken the table on their blog and calculated a quick mathematical average using a spreadsheet program. But, the table only included a sub-section of the full data being used and the data was already in statistical summaries instead of original polling numbers. I decided to find some raw data and create some graphs that would allow me to perform some analysis myself.

Much data is available for download and analysis from the US Census Bureau. This data can be downloaded and edited. It can then be used for graphing or mapping in many Golden Software programs. The data can also be used for analysis, such as creating statistics, comparing values, or providing supporting evidence for other statistics. In this case, I thought some simple bar charts for various populations would help support or overthrow the claims of the decreasing gender wage gap in young workers.

The amount of data on the Census website is staggering. You can find population data; labor force statistics; education attainment information; historical data; data specific to a city, an area of the country, or for the entire country; and much more. After searching around, I found some employment history detailed data tables. Although this isn’t the same data that was being analyzed and discussed on the blog I was reading, I thought that the median earnings by age presented in this data set would give me a good glimpse of how earnings change with age for males and females. There are several reasons why this data might be biased and provide different information than the Liberty Street Economics blog. For instance, this is a single snapshot, and not tracking the same people throughout their lifetime. If you started your career 20+ years ago with a large wage gap, that gap would probably continue throughout your career. If you left the work force for some time period, the wage gap among peers who did not leave the works force would, most likely, be larger. The data I found had information for all workers, for those who had no gaps in their work history, and for specific educational levels. Since I wanted a quick analysis, I thought using the no gap in work history data would provide a good analysis. I edited the data in a spreadsheet and created a bar chart comparing men’s median earnings to women’s. 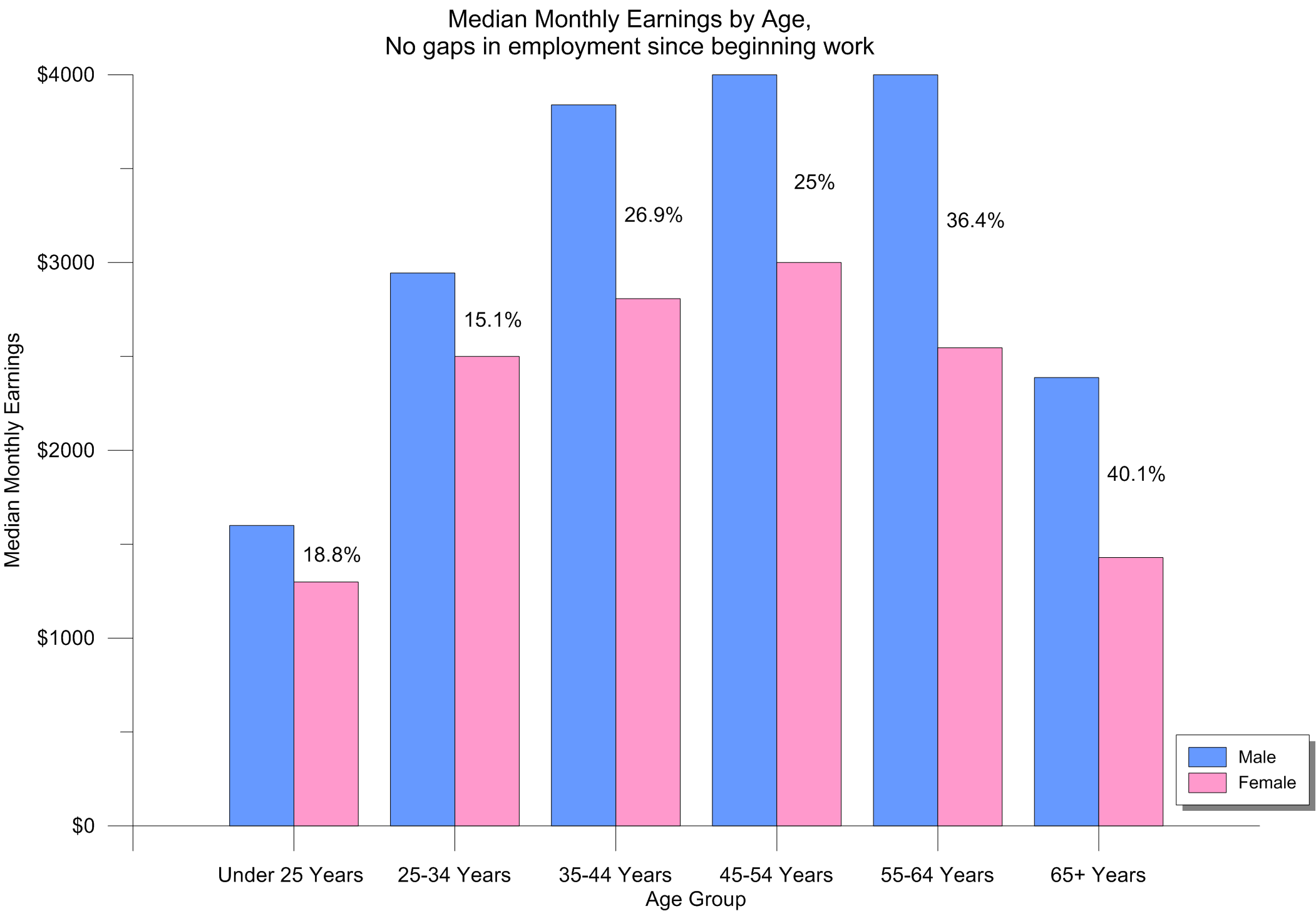 These adjacent bar charts, created in Grapher, support the
statement that the wage gap increases later in the career.

I continued to think about the article and the data I had and decided it would be better to examine only those people with a college degree, as this would more closely match the survey. I edited the data and updated the graph. 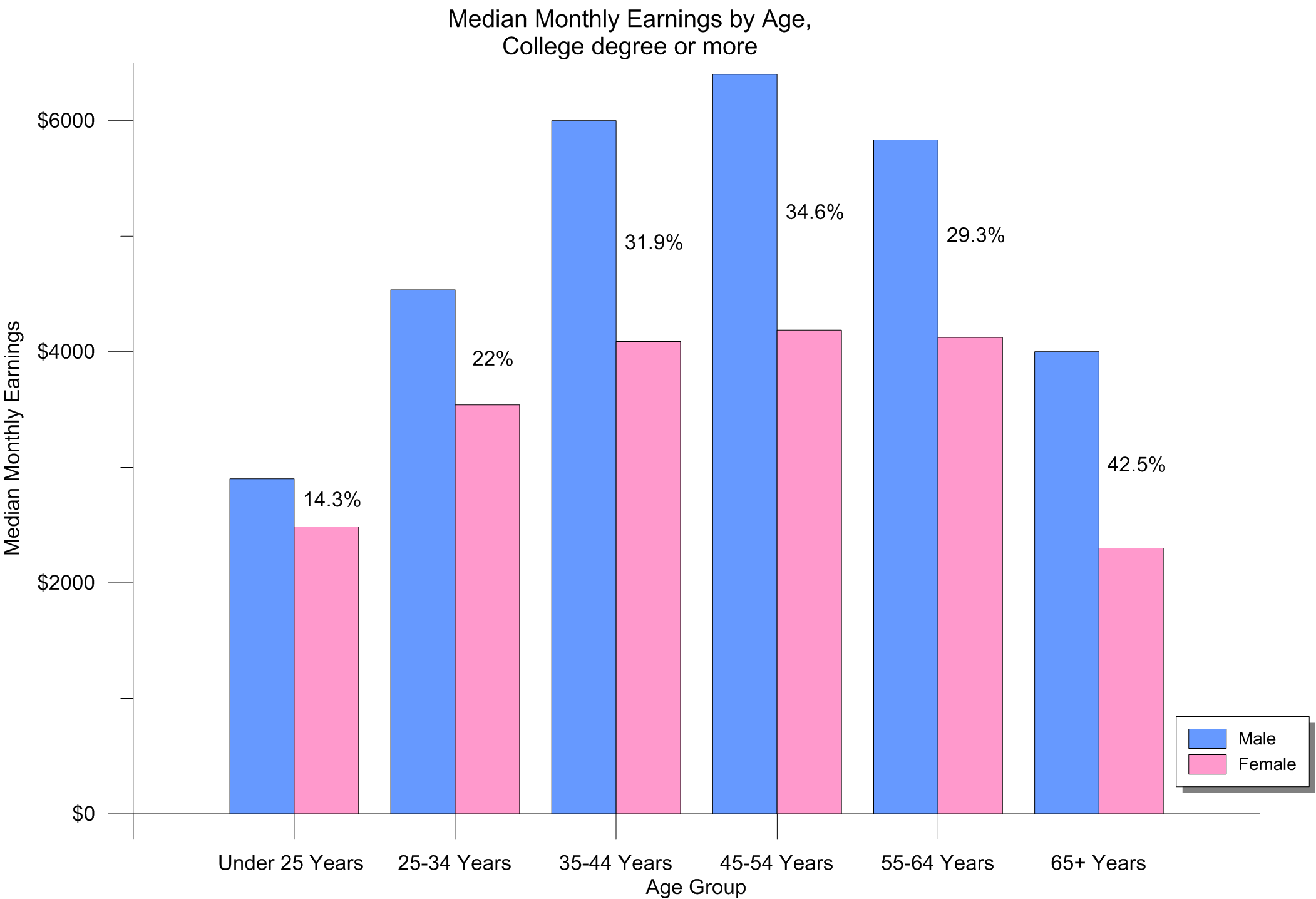 These adjacent bar graphs, also created in Grapher, shows a similar
increase in wage gap as age increases. But, the gap at the starting age is lower.

I was pleasantly surprised to see that the initial age group did have a smaller gap, indicating that fresh-out-of-college male and female graduates were making closer to the same salaries than those male and female counterparts later in their careers. But the gap widened beyond age 25, in a similar manner to both the graph above and the comments from the Liberty Street Economics blog. What surprised me was the wage gap was larger for the college-educated population later in life than the more general population presented in the first graph. What could the numbers showing a larger wage gap for college educated women vs men mean? That interpretation is beyond the data I downloaded for analysis. But, it does make me want to go out and find more data, possibly uncovering additional factors to the wage gap widening later in life.

So, the next time you are reading an article that includes statistics and you find yourself skeptical, take a few minutes to find the raw data and create a graph yourself in Grapher. The results might surprise you.