As I sat thinking last night, having a beer on New Beer’s Eve, about what to write my next blog about; it struck me, April 7th is National Beer Day and would be a great oppurtunity to discuss beer. National Beer Day celebrates the modification of the Volstead Act, which raised the legal alcohol level of beverages that can be consumed from .05 percent to 3.2 percent. On April 7th, 1933, President FDR took the initial leap towards ending Prohibition where he signed the act which allowed beer champions to legally purchase beer for the first time in over 13 years. After modifying the act, Americans consumed over 1.5 million barrels of beer! National Beer day was founded by beer enthusiasts Justin Smith and Mike Connolly in 2009 and has taken the nation by storm. 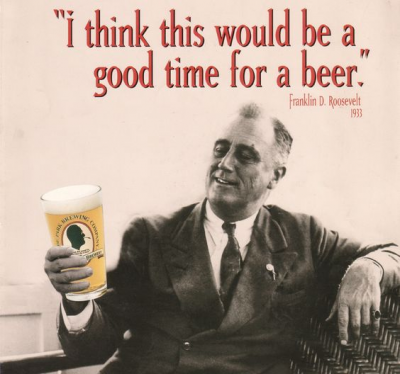 FDR's quote after he signed act to allow 3.2% beverages to be sold in the US.

In recent years there has been a craft brewery explosion across the US. In observance of National Beer Day, I thought it would be interesting and appropriate to map some current craft beer statistics for the US to see how the states compare to one another.  I used data taken from the Brewers Association website (https://www.brewersassociation.org/), where I examined the number of craft breweries by state, the number of barrels of craft beer produced by each state, the breweries per capita by each state, and the number of gallons of craft brew per drinking age adult by state.

A great way to compare these beer stats would be to use MapViewer to generate some thematic maps. Let’s take a look at how everyone’s beer consumption adds up across the US.  First let’s look at the number of craft breweries each state has. In the prism map below, the state’s range from 6 craft beer breweries in North Dakota to 431 in California (way to go Cali!). 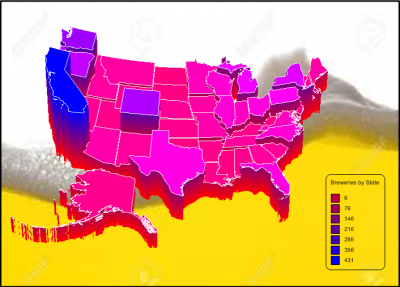 Prism map showing the number of breweries per state.

The map above does not, however, paint the complete picture of beer consumption across the US. If the number of breweries by state was normalized to the population, you can see which state has the highest craft breweries per capita. In the map below, it looks like the tables have turned for California, the Pacific Northwest, and East coast hold the honors the highest number of breweries per capita. Colorado does not look like it’s doing too shabby either. 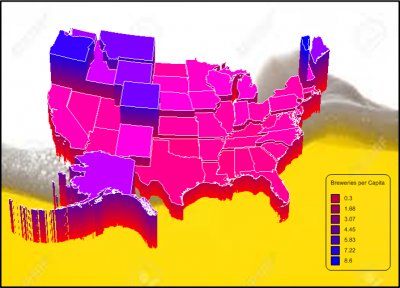 Prism map showing the number of breweries per capita in the US.

Finally, let’s take a look at what I think is the most impressive and telling statistic for the comparison; the number of gallons of craft beer each state consumes per drinking age adult annually. In the map below, the state’s range from 0.2 gallons per adult in South Dakota, Arizona, and West Virginia to 16.2 gallons per adult in Vermont.  Again, Colorado holds its own by taking second place, which is not too surprising as the number of craft breweries and the breweries per capita are also on the high end compared with other states. 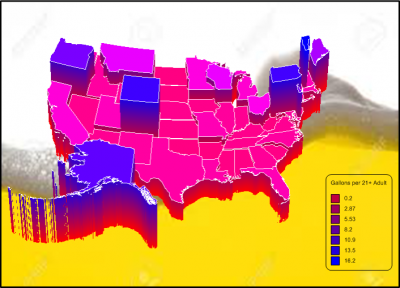 Prism map the gallons of craft beer consumed annually per 21+ adult in the US.

So there you have it, a good comparison of craft beer consumption across the US using thematic mapping in MapViewer. Let’s all remember to safely celebrate National Beer Day by raising a pint glass (or a growler) of your favorite craft beer on your way home from work today. Cheers from Golden Software! 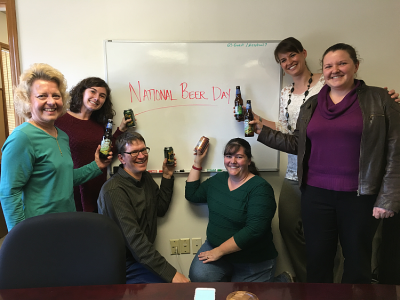 Cheers Guys! Thanks for helping spread the word about one of my favorite days of the year. When I started National Beer Day in 2009, I had no idea that it would get so big so fast.

0 Cancel Reply
Cheers Guys! Thanks for helping spread the word about one of my favorite days of the year. When I started National Beer Day in 2009, I had no idea that it would get so big so fast.
Cancel Update Comment

People really do love their beer! Thank you for getting this great day honored.

0 Cancel Reply
People really do love their beer! Thank you for getting this great day honored. :D
Cancel Update Comment

Can't tell if you guys are working hard or hardly working!

As a Czech citizen - and you surely know that Czech beers are the best in the world - I am very happy to learn that Golden Software celebrate this most important day of the year!!!

0 Cancel Reply
As a Czech citizen - and you surely know that Czech beers are the best in the world :) - I am very happy to learn that Golden Software celebrate this most important day of the year!!! Cheers :D
Cancel Update Comment