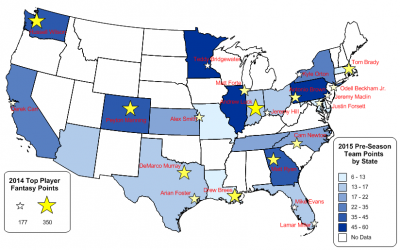 September has arrived, and fall is nearly here.  For many people fall means football!  With fantasy football drafts upon us, I thought it would be fun to create a map displaying the highest scoring players and NFL teams across the US.  I began by pulling some fantasy football stats from one of the many fantasy league websites to create a spreadsheet with the stats I was interested in.  The fantasydata website has fantasy points assigned to NFL teams based on 2015 pre-season performance as well as historic full season fantasy points for each player.  I was curious to see if the best fantasy point scorers coincided with NFL team fantasy points.

Since the 2014 stats are for individual players and the 2015 pre-season stats are for teams, I decided to show the player data using a symbol map and the NFL team data using a hatch map. Symbol maps apply a color and size gradient to each symbol based on a specified data column. I also applied a color gradient to the hatch map and added labels to the player symbols for a bit more information.

While this was made with a fairly small sample population, it seems to show that a single star player does not make a strong team.